This is my first post so if there's any mistake, i'm sorry :(

Is B.A.P already gearing up for a comeback?

Member Daehyun just tweeted a photo of himself on a camera screen and wrote, “Spoiler…“. It looks like the shot is from a possible music video, hinting that B.A.P could be preparing for another comeback.

The group debuted in January last year and has promoted songs at a torrid pace with “Warrior“, “Secret Love“, “Power“, “No Mercy“, “Crash“, and “Stop It“. This would be their 7th promoted single in less than 12 months.

Looks like B.A.P is sparing ‘no mercy’ for BABYs! What do you think this could be for?

Welcome to the final special edition on UK fashions in Kpop. We’ve looked at how some of the biggest names in Korea have been wearing clothes designed here in the UK, and this article will be no different. Here we’ll be looking at artists from JYP, Cube, TS Ent and several other smaller companies who have shown a great appreciation for UK designers. 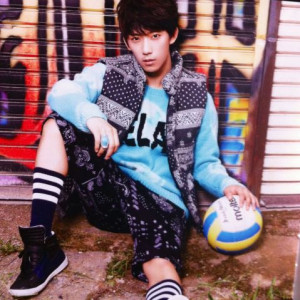 “I personally think that Girls’ Generation’s strength, and from this album on, is versatility,” said Tiffany during an interview Monday. “Just by listening to the album itself you can get hip-hop to sweet songs, to tough and girlish. There’s a lot of versatility in the album ― from the wigs to the fashion, the sounds, the beats, the dance.”

“For our comeback, we really wanted to show our fans a new side of us,” said Seo Hyun. “This is the style of music that most of us enjoy listening to in our free time. It was so much fun for us to try something new.”


Girls' Generation redeemed with 'I Got a Boy'

From left, Sunny, Tiffany, Taeyeon, Seohyun, Yoona, Yuri, Hyoyeon, Jessica and Sooyoung
of Girls’ Generation pose for their fourth full-length album “I Got a Boy,”
which was released on Jan.1. / Courtesy of SM Entertainment
By Kwon Mee-yoo

Arriving for a round of press interviews in Apgujeong-dong, Seoul, Tuesday, the members of Girls’ Generation were lovely even in their off-stage, every-day clothes.

Sixth year since its debut, the nine girls seemed more maturing girls than the dynamic, rapping powerful dancer/singers in their fourth full-length album “I Got a Boy.”

Their title track “I Got a Boy,” released on the first day of the year 2013, surprised the K-pop scene with fresh, unexpected music and style.

The members of Girls’ Generation talked about dating and getting married in a recent interview with Sports Seoul.

When asked, “Shouldn’t you be in relationships by now?“, they answered, “For some reason, people find us difficult to approach. On talk shows, girl group members are asked how many people asked them out. When we hear their answers, we think, ‘What’s wrong with us?’. We’re really curious how people are introduced to each other and how they contact each other. Apparently the worst women in the world are the busy women.

The last week and a half has been explosive @ Omona. You all have done a great job of making posts and encouraging others. Lets keep the trend going! This post is a helpful compilation of the things we learned from my original post.

TYFYT! We hope everyone keeps enjoying & contributing to Omona in 2013!

SBS’ ‘Strong Heart‘ might be canceled after a 3-year-3-month run.

Reports are saying that the show’s producer Park Sang Hyuk is recording his last episode on the 17th and will leave the show to study abroad. It’s also been confirmed that current co-hos Lee Dong Wook, and possibly Shin Dong Yup, will be leaving the show.

With these new developments, there are rumors floating around that the talk show has been canceled all together. An insider from SBS commented, “It looks like ‘Strong Heart’ will be canceled. Though there are negotiations going on for a relaunch, considering that the follow-up program has nearly been confirmed, it’s likely that it’ll get cancelled.”

Lee Dong Wook’s camp commented, “After recent talks about the show’s relaunch, the final decision has been made [for Lee Dong Wook to leave 'Strong Heart']. He’ll be returning to his work as an actor.”

There are no confirmed details about what program will likely take over the show’s time slot, and it’s undecided whether ‘Strong Heart’ will move on with its relaunch or whether it will be canceled permanently.

Are you sad to hear that the show might go off-air?

Brown Eyed Girls‘ Narsha has decided to join the crew of KBS‘s ‘Immortal Song 2‘ as a fixed member.

A representative of the singing competition confirmed the news on January 7th and shared that the singer will be holding her first recording on January 14th.

“Narsha plans to showcase her capabilities not as Narsha of Brown Eyed Girls, but as Narsha the solo artist… With also the new addition of singer Ivy, viewers can look forward to a showdown between Narsha and Ivy’s vocals and performances,” the representative stated.

Narsha made a special guest appearance on the January 5th broadcast of ‘Immortal Song 2′ in support of fellow member JeA. The two performed a collaboration of their own hit song “Abracadabra” and Um Jung Hwa’s classic “On the Count of 3″.

The first episode featuring Narsha as a fixed member will air some time this month.

Is it just me or some parts seem scripted? Cause the drama is pretty... overwhelming.

Here's a nice recap for you all.

jonghun, be less obvious
minhyuk get your shit together before your girl gets stolen from you
g.na the comfy noona aka sung ah 2.0 please no just pair her up with kevin already

btw i've been wondering when did they shot these episode, mostly cause the hair and wather got me confused, btob schedule says 121021-121024. just fyi :)

Girls' Generation who started this year with a bang has revealed their thoughts about their comeback, future plans and more through their recent interviews with the media.

Please approve this one! Hope it is good like this mods! My iPad is tripping non-stop T_T

It has been reported that Jessica was hospitalized due to exhaustion.

On January 8, during her musical ‘Legally Blonde’, her body wasn’t in good condition and she fell down twice. Her legs kept trembling during the show but she persevered till the end and was seen crying after that. She was seen being carried to the van by her manager. It was also reported that the rest of the Soshi members rushed to the hospital after hearing the news.

Seem like the tight schedule with ‘I Got A Boy’ promotion, musical, magazine shooting, TV show recordings, preparing for the Japan Tour and other activities weakened her health and led to the exhausion.

Get a lot of rest and get well soon! Health comes first!

It makes me mad that things like this happen on regular basis and that SM - or any other company for that matter - doesn’t seem to see that pushing their artists to the limit on a constant basis is not beneficial for their health in the short and long run. They have to juggle their Second Japanese Tour and their Korean Promotions from February to April as well and … Argh, it just makes me mad and sad at the same time. I rather see them do one thing at a time and be happy and healthy while doing it than do so many things at the same time and be exhausted and sleep deprived the whole time.

the "i got a boy"-ing starts around 1:10 and picks up into full on fanboying lol. the gif source says he likes taeyeon but he received a tiffany one instead. any banas know which member he likes?

WARNING: video heavy. it is advised you open this in a new tab or something so you don't crash your computer. just sit back and enjoy 2012 rewind

did your picks win? what was your favorite thing about 2012? what are you looking forward to in 2013? did you notice a typo somewhere in this post and if so, can you not post them in the comments because ignorance is bliss thanks ilu? yay!

so tempted to troll gift my mom with those hello kitty sneakers. she loves hello kitty but she'd never wear them lol

What did you think of the start of the series Omona?

It seems some of your favorite idols will be appearing on an upcoming episode of SBS‘s ‘Running Man‘!

Shindong of Super Junior and Sunggyu of Infinite has been confirmed as fixed cast members of the variety show “High Society.”

Producer Lee Dong Hee of “High Society” said, “While we were searching for cast members, Shindong and Sunggyu were suggested as both Super Junior and Infinite has been on the show before…Shindong is close to Lee Soo Geun and Kim Byung Man so we anticipate a lot from him. Sunggyu was chosen because we believe he can show a new character that is unlike what we regularly see on variety shows.”

Shindong showed his distinct variety sense as he quickly adapted to the rooftop setting on the December 29 broadcast of “High Society.” The past October, Sunggyu brought laughter to the audience with his offbeat charms.”

Producer Lee Dong Hee added, “We recorded their first episode this week and the concept was that Shindong and Sungyu went into filming not knowing about the other person and share the rooftop room together. Their chemistry exceeded our expectations.”

Shindong and Sunggyu’s first episode will air in February on JTBC.

I added the photos only because since I couldn't embed the videos the post looked so sad, D:.

Mods, I tried to make a Tinypic account, but apparently it's been bought by Photobucket so I thought I'd try with my already existing account. If this's not olay I'll use my own gallery.