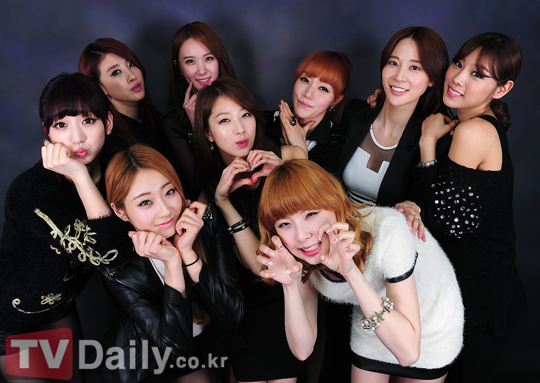 These days girl groups are honest rather than being innocent but this group is unstoppable. We recently got to meet up with Nine Muses (Sera, Lee Sam, Hyuna, Euaerin, Eunji, Son Sunga, Kyungri, Hyemi, Minha) who have fresh personalities just like their long figure.

After their debut in 2010, they recently added member Son Sung A to form 9 members for their upcoming comeback with digital single ‘DOLLS’ which will be released on the 24th of January.

“A comeback in 9 months might be seen as a long period but during that time, the members have done self-improvement and hence didn’t feel such a long preparation break. As we are coming back as 9 members, we are preparing ourselves just like how we had our debut.” (Hyemi)

“We used to be very worried about our previous comebacks, but I think this comeback will be more enjoyable. And since we are back as 9 members, we feel more comfortable. We laugh together a lot and think positive if we are having a hard time.” (Hyuna, Minha) 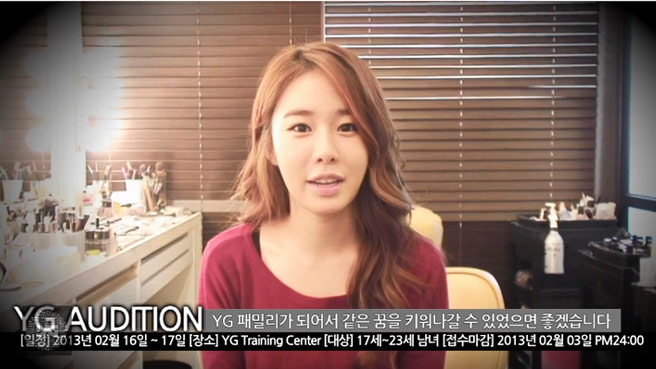 For the first time in YG history, YG Entertainment will be holding actor auditions.

On January 18, a video spot featuring Yoo In Na was released. She encouraged future actors to participate in the upcoming auditions. “I hope that you can become a member YG family and grow your dreams together.”

The audition application forms can be downloaded at the YG Audition page. They must be submitted on February 8. Auditions will be held on February 16-17 at the YG Training Center.

More information can be found here.

OWSLA, Skrillex's record label, replied to Diplo's tweet on January 17th about wanting to get in touch with T.O.P:

holy crap it sounds so good!

update: there's a rumor going around that the song in the teaser isnt DOLLS. but another song on their album called "What is Love?"

So members of B.A.P. took a picture with some girls in bikinis.

( Collapse )
Tbh the best reaction was, "Okay I know our fan name is BABYz but that doesn’t mean we have to act like babies. "

That was honestly the most confusing journey of my life, considering there are like 50 different things happening at the same time. Zelo dyed his hair black and some people are upset, Rain Sound (I think that's what it's called) came out and people are freaking out over that, and apparently nobody knew B.A.P was in th Philippines nd a lot of people are super depressed over that. Also there was a fan who spiked Himchan's drink with laxatives before he went on stage?

Quotes from the B.A.P
Thanks t

in_noctem or tipping me off.

EXO was in the Philippines together with SNSD, Infinite, U-Kiss and Tahiti and they had a lovely concert. I thought I'd share some of the fancams people took, since they had a lot of special stages.

I'll edit more fancams in as they appear, or post them in the comments, should this post get approved. :)

Tell us your experiences here! What are the ups and downs of the concert? How did the six groups performed? The fans' enthusiasm? Voice it out!

Hoping admins would allow this post here in Omona. :3

Earlier, the photo below of SECRET‘s Hyosung posing in undergarments was leaked online and definitely piqued the attention of netizens. It was revealed that the photo that had been leaked was one that was taken during a photoshoot held with an underwear brand.

With the photo gaining attention, TS Entertainment confirmed that Hyosung, known for her “bagel girl” image, has indeed been selected as the endorsement model for trendy undergarments brand ‘Yes‘.

Tbh the leaked picture is kinda tame. And this should have been a joint deal with Zinger!

Kim So Hyun chose "School 2013" as her current favorite drama.

Kim So Hyun said, "On top of that, the producer for 'School 2013,' PD Lee Min Hong, was the producer who did my debut work so I went to visit their filming site recently."

Kim So Hyun said, "I've been wanting to do a youth drama too so I've been paying close attention to 'School,' and there are many areas that I can relate too. The concerns between students and teachers spoke out to me too so I got really into it."

She also talked about the characters in the drama, saying "I saw them at the filming site and they really are models. I really love seeing them together in one screen," laughing. She said, "I like that Lee Jong Suk looks bright, and Kim Woo Bin looks a bit more manly and dependable. I want to act with both of them if opportunities come."

But when she was asked who her ideal is, she said "I've been saying this everywhere for a while now, but it's Park Yoo Chun. I even worked with him for 2 dramas already. He's nice and funny and everything about him is good."

Nate Pann frequently has 'articles' that are compilations of pictures assembled by netizens, with or without commentary. As someone with limited Korean skills, I mostly see the ones that Netizenbuzz posts. The most commonly featured idols and actors, unsurprisingly, are the established ones that debuted in 2009 or before. Of those who debuted later, I have scientifically determined that the most commonly mentioned group is Infinite (seen in 'a lot' out of 'a whole lot' of posts), with Block B, B1A4, Boyfriend, Girls' Day, and a few others making up the majority of the other newbie appearances.

These picture posts are usually rather large and disorganized, so in an effort to give a more cohesive post I am compiling the appearances made by B1A4. I was surprised and, as a stan, pleased to see them getting recognition in the general netisphere. (even if the recognition is sometimes 'their clothes suck') The member who appears the most is Sandeul, which from my personal experience is no surprise. B1A4 is one of the most popular groups in the elementary school where I teach, and "Sandeullie Oppa" is a favorite member. Similarly, when I went to their concert in December, Sandeul seemed to have more signboards than the other members. (additionally, there were individuals going through the waiting fans with various polls on the group. Sandeul was winning both the 'favorite member' and 'member who probably watches a lot of porn' polls.)

Without further ado: the categories!

Mods, I hope this post is ok? I really wanted to post some of the picture compilations (esp. the evil eye one!), but they're really random and messy. Hopefully people other than me are interested in this too. ^^

JTBC branches out into the daily drama market

Y’know, of all the newly launched cable stations, I think JTBC is the one who got it right (or most right, at least). Even putting aside the quality of their programming (with shows like Padam Padam, A Wife’s Credentials, Childless Good Fortune, and Can We Marry), they’ve taken a gradual approach, starting small and expanding rather than jumping in all at once.

Now JTBC is rolling out its first daily drama, to be headlined by Jang Shin-young (Empress, The Chaser). It’ll be the first evening serial among the new general-programmer cable stations, and is titled literally Spineflower, though I think perhaps the more literal Thorn Flower (or Thorny Flower) may sound a bit better.

Sounds like Revenge (US TV Show) to me but more extreme and makjang. Even the "Thorn" part.
*Makjang

Hyoyeon confessed that she was the most popular when she was a trainee.

YoonA, Yuri, Tiffany, and Hyoyeon were guests on ‘Happy Together 3‘ that aired on January 17th. During the show, Hyoyeon was asked, “When was your best time period?“. She answered, “I don’t know if I had one. I was popular only when I was a trainee.”

YoonA confirmed, “Hyoyeon was the celebrity of all the trainees. She had fans even when she was a trainee“.

Hyoyeon continued, “I debuted after going through a long training period, but I wasn’t as popular as I was when I was a trainee. I told myself there was nothing wrong with my abilities.” She was then asked, “What do you think was the problem?“, and Hyoyeon gestured to her face, causing everyone to laugh.

I must say that I love the hook and the dance is super cute!
and these yt comments are having me roll~ing. edit: sorry, there was a racial slur in one of the comments that i didn't notice before.