Lee Seung Gi and Bae Suzy have been confirmed for the lead roles in MBC ‘Gu Family Book’.

‘Gu Family Book’ is filled with the adventures of Choi Kang Chi who was born as a half-human-half-beast but tries to become a human. In the drama, Lee Seung Gi plays Choi Kang Chi who was born to Gu Wol Ryung, the guardian spirit of Jiri Mountain, and Seo Hwa, his human mother. Kang Chi is an outspoken character who’s full of curiosity. He realizes that he’s a half-human-half-beast through a certain incident and starts living his 2nd life.

Bae Suzy plays the role of Dam Yeo Wool who is a master of martial arts and archery. Yeo Wool is an upright character who really values the Three Bonds and Five Relationships in Confucianism, and becomes an instructor at a martial arts center at a young age.

» jypnation's twitter » tryp96@wordpress » ajunews via nate
i'm still side eyeing and face palming over the fact that jype took so long to confirm when every single other media form was saying, especially since they deiced to confirm it just a couple days before pre-production starts and suzy has to go training for archery & martial arts. and excuse me while i keep rolling my eyes thanks to the overzealous LSG fans, I hope suzy makes out a lot with their oppa.
MODS: i edited the post just to add the twitter print screen that i forgot before.

Article: Yoo Oh Sung expresses "In Korean society, whenever a governmental scandal erupts, the controversy is covered up by entertainment news"

Actor Yoo Oh Sung was asked what he dreamt of achieving as an actor and he chose respect. "In Korean society, I often notice that whenever governmental or societal scandals erupt, there is suddenly an explosion of entertainment scandals that are released. In the end, I just don't want actors being used so easily by society for these things."

1. [+716, -120] Whenever a governmental scandal comes out, celebrities suddenly start doing drugs, getting divorces, and going on public dates.

3. [+586, -146] I noticed this as well during Seo Taiji and Lee Ji Ah's scandal. There were several other scandals that came out at the same time. I think this goes the same in any country. The entertainment industry is used to distract the public and cover up anything else that's more important. There are way too many instances of this happening to call it a mere coincidence.

4. [+59, -22] I'm honestly tired of conspiracy theories. It doesn't make sense for a celebrity to go out drunk, get in the car, and hit someone just because someone told them to so they can cover for another governmental scandal.

5. [+49, -36] I don't believe in these conspiracy theories either. In what world would celebrities go out and do drugs, drunk drive, and murder people just to cover governmental scandals ㅋㅋㅋㅋㅋㅋㅋㅋㅋㅋㅋ
- Haven't you noticed that most of the scandals were events that took place months or years ago but are conveniently released to the public at the same time as a governmental scandal?

Slightly more legit list of winners than the GDAs.

“There exists an unjust world that people can’t see”

JYJ’s Kim Jaejoong (27), who we met at the Seoul Plaza Hotel on the 21st, seemed to be cautious of his words. When we asked him how he felt about his recently ended lawsuit, he seemed to shake a bit before he spoke up. He said, “I’m really happy,” and “You probably don’t know how big my smile was when I heard the news.”
( Collapse )
( Collapse )
( Collapse )
kyunghyang + TV Daily + sports donga + enews24 - Translated & Shared by dongbangdata 1 + 2 + 3 + 4 | Nate - Translated by: Hannah @ PrinceJJ

I was going to include the pictures from the concert but that post will have to wait. It's almost ready though. I've finally sorted out everything.

The president of Cube Entertainment which houses 4minute, BEAST and many more popular idol groups, President Hong SeungSong (49) is revealed to be suffering from ALS disease (or also known as Lou Gehrig). A representative from Cube Entertainment spoke out regarding to such ‘rumors’, “Although (the president) is not feeling well now, he does not have those widely spread rumored diseases such as Lou Gehrig, Parkinson or Cancer,” they ‘clarified’.

Close friends of Hong President expressed that he’s having some movement inconvenience and could only stay sit on the chair. The agency however, denied any allegations of such disease by saying, “He comes to work on time and moves as he works”. Reporters tried to talked to him on the phone for the past three days, but he refused to take in any. A representative hinted, “After receiving a confirmed diagnose in America, it’s true that he’s now resting” and, “A few of his close friends who have heard the news have came to comfort him”.

Hong President is an invincible legend who has been in the music industry for the last 20 years and had raised numbers of top stars. Started as part of a management team for singer Lee Yerin, he had worked with talented artists such as Park GiYoung, Lyn, Kim DongRyul and many more. He then worked hand in hand with Park JinYoung in establishing JYP Entertainment.

His life was continuously ’fearless everyday’ until he finally established Cube Entertainment and becomes a leader of K-POP. In 2011, in an autobiography that he wrote,”There won’t be any spotlight if you stop now”, it stated that he waited (fearlessly) and as he sacrifices for that, he is a ‘Master of Patience’ that would wait quietly for talented and passionate individuals.

We once met up with Hong President 2 years ago. During that time, not only did we interviewed him and another composer in the Cube Entertainment building, he also personally escorted reporters till the parking lot. He did not say much and his pale face was kept smiling even when reporters turned around and leave. This short testimonial was recently passed to me by an affiliate in the circle. He said, “The management system differs a lot now” and, “He’s that rare type of manager that treats people with warmth”.

Hong President who has explained a new K-POP strategies through passion, and emancipates warmth to those others, we hope to see his ‘fearless’ look in the near future soon.

For those of you who don't know what ALS/Lou Gehrig's is It's a disease that affects nerve cells and is characterized by a rapidly progressive weakness, it keeps progressing until it results to death. The progression of the disease can only be slowed down with medication, but there is currently no cure for it. The median survival from the time of diagnosis is three to five years. There is no cure.

i love photoshoots, most are so pretty

The two stars recently spent time together shooting for the 2013 spring photoshoot of fashion brand ‘Chris.Christy‘, which took place at a studio in Seoul’s Nonhyun-dong.

Both Won Bin and Kim Min Hee previously worked together as they filmed for a communications brand commercial back in 1999.

During the photoshoot for Chris.Christy, it’s said that Won Bin and Kim Min Hee had an awkward reunion in the beginning, but the two quickly loosened up as soon as the shooting began. When they were requested to appear like a close couple, Kim Min Hee brought laughter to the studio and created a warm atmosphere by boldly wrapping her arms around Won Bin.

Despite the long hours of the photoshoot, Kim Min Hee handled it professionally as she maintained her bright smile and showed off her charms by putting on various poses and expressions.

Won Bin and Kim Min Hee’s pictorial will be featured in the mid-February issue of ‘Chris.Christy’.

i wish he'd come out with a new movie or drama soon, i miss him mucho. 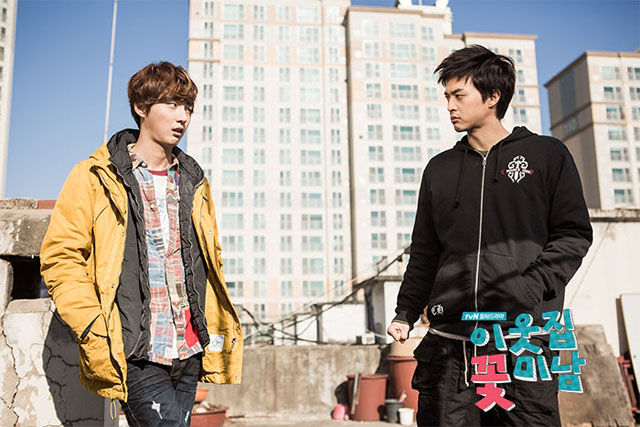 Watch the episodes over at DramaFever

and read the recaps for Ep 7 and Ep 8

As previously reported, 2PM‘s Taecyeon is said to be in talks for a ‘world version’ of the popular faux-marriage variety program ‘We Got Married‘, and now there is word on who his partner may be if the idol does indeed star in the show.

According to a report, an insider from the Taiwanese entertainment industry revealed, “Wu Ying Jie [stage name: Gui Gui] has been confirmed to appear as Taecyeon’s on-screen wife on ‘We Got Married – World Version’… The contract has already been completed, and she is waiting for the filming date.”

Omg she's super pretty. The pic above doesn't do her justice tbh. Also JYPE needs to stop beating around the bush and just confirm this already.

DSP has announced that there are up to 30 private videos schedule to be released through Rainbow’s YouTube channel. They will be all different kinds of videos from self camera to behind the scenes and more. DSP has said they are doing this to make up for 1 year and 8 months without Rainbow.
The video released earlier with Jae Kyung marked the beginning of the releases. No details on how long each video will be. 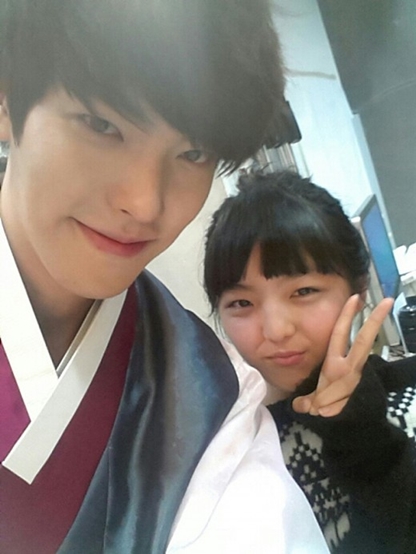 On the afternoon of January 31, Kim uploaded a picture on his Me2day with the caption, “I met the ‘superior actress’ Shin Ae from Sidus HQ.”

Wearing Korean traditional clothes, Kim is posing in a friendly manner with Seo Shin Ae. Seo who was born in 1998 is nine years younger than Kim who was born in 1989 debuted five years before him. Therefore, Kim calls her the “superior actress.”

Netizens commented: “It’s so cute of you to call Seo Shin Ae your superior.” “Kim Woo Bin is so handsome.” “It would be nice to see you two act together.”

Previously, Kim Woo Bin has been playing the role of Park Heung Soo on KBS 2TV’s School 2013, which aired its last episode on January 28.
source: starnews via enkorea

Just because School 2013 is over, doesn't mean this OP is going to stop posting Woo Bin in Omona!

THE FANCHANTS!
And besides Daniel's lace-up pants and Inati's furry beret, I liked their wardrobe choices too.

their new album "Blessed" is set to be released on Feb 5!
Collapse