Joo Won is a kind man. He stresses on good etiquette and basics. He enjoys meeting people. He dislikes bad women. Before you grumble that it’s not fair, this frank and bright 26 year old actor’s heart has silently permeated your being.

Open to: All, detailed results viewable to: All. Participants: 60

Do you want Joo Won to have his own tag?

This half was way more interesting than the first half. A must watch as they ACTUALLY talk (as in give deets) about past relationships, first loves, etc. Features Seohyun's performance of "Sometimes" and Tiffany's "We Found Love". First half previously posted here

hehe taeyeon sooo interested in that answer, otp <3
cannot wait for the day when they can freely dish out all the info on their past relationships

source: akp lyricspinas i am responsible for the terribad re-translation

if yall havent noticed yet all the posts ive made this year(i think) have paint-level edits, im tryna bring some low class semi-original imagery to articles.

At least Hoon's directing was somewhat better than Kiseop's lol
Which Christmas date if U-Kiss has girlfriend did you like best and least? Romantic Kiseop, sweet Soohyun, shy Eli, direct Hoon (my fave), cute Kevin or young Dongho (least fave)?
Most unsatisfying ending ever! That is until I look up the chart position myself.
I'm on a roll with all my U-Kiss posts this week. Yay! Lots to spazz! Still crazily waiting for more specific info on the comeback though. Where is my info NHM! 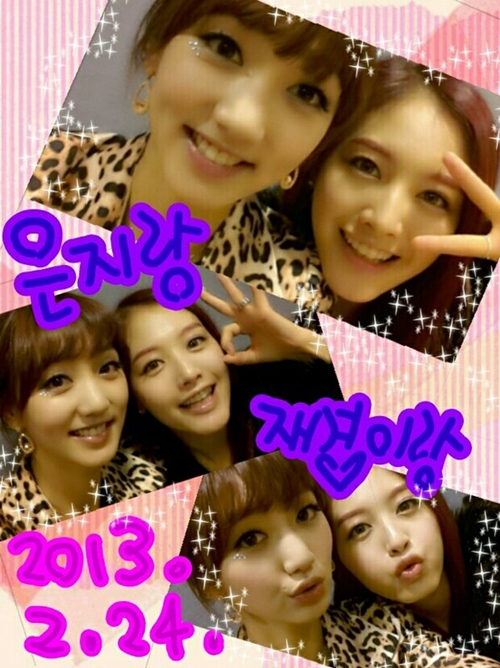 On February 24th, Eunji tweeted, “Waiting room of Inkigayo♥ We are ’88 line☆Gather here ’88 line” and shared the above picture.

The picture showed Eunji and Jaekyung posing for the camera together. The two stars are of the same age, having been both born in 1988, and known for their close friendship. The two captured the viewers’ attention with their mature, yet cute beauty – perfectly in line for women who are now 23 years old.

After seeing their tweets, fans commented, ”Their sexy looks are similarities too“, and “Who else is in the ’88 line? KARA‘s Seungyeon and Gyuri, T-ara‘s Eunjung were also born in ’88. ”

Simon & Martina, founders and faces of YouTube channel Eatyourkimchi, recently sat down with K-hiphop group MFBTY (Tiger JK, Yoon Mirae, Bizzy) for an intimate interview. Apart from the inevitable awkwardness pursued by the interviewers it's worth a watch for the awesomeness that is MFBTY.

So obviously it didn't air. And they chose Found and Empty (an OST and English song at Korea's presidential inaugural ceremony)? WHY? I thought they were going to cover Seo Ta ji and The Boys? And wow the commentators. If it's to talk shit like that they should just shut up.
But yeah Tokyo Dome!

Naver Music has released a special promotional page for 2AM's upcoming comeback for their 2nd album "One Spring Day". There will be content released leading up to the album release on March 5th.

Hoping for something cheerful (guessing by the look of the teaser photos). No sad ballads this time please ~

Omg so the swords are legit props for the choreo?? Lolol not sure how I feel tbh but it sounds great!

Get a glimpse of what we’re talking about and listening to at the 6Theory office with this fun feature! We’ll be offering you guys a personal selection of our favorite things from K-Pop.

In the world of K-Pop, the words Underrated/Overrated get thrown around more than idols changing their hairstyles. In this week’s Staff Picks, we thought it would be fun to pick 10 idols who we thought were underrated in the industry, whether it’s with their music, their dance, or their humor.

Do you agree with this list?
who is underrated for you ? 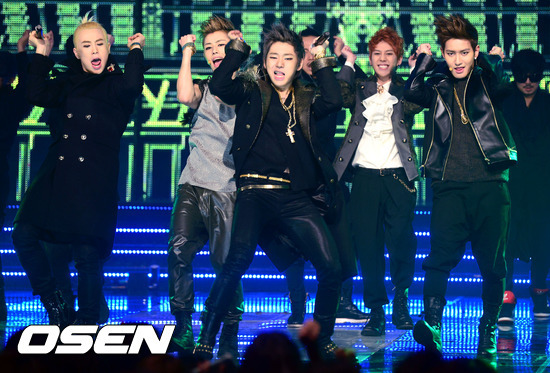 Block B “Hundreds of Millions KRW Unaccounted For” vs Agency “There Is No Credit History”
( Collapse )
Source: OSEN via NATE
Translated By: Youngha@ BLOCKBINTL

Idol band CNBLUE will be heading out on a world tour.

The tour will kick off on April 6th in Taiwan at the Taipei Arena. The rest of their confirmed schedule consists of Singapore on April 13th, Thailand on May 4th, and Hong Kong on May 11th. Dates for countries in Oceania, Europe, and the Americas will be added soon.

CNBLUE is expected to be a big hit at their first stop because of their already high popularity in Taiwan.

According to Taiwan’s music sales chart G-Music, CNBLUE’s newest mini album ‘Re:BLUE‘ ranked number one on the weekly album chart for the week of February 15th to the 21st despite not being released in Taiwan until February 20th.

2NE1’s CL has never looked more mysterious, glamorous, and beautiful before! She appeared in a photoshoot with the other 2NE1 members for the fashion magazine “Bazaar.” But on February 25, “Bazaar” revealed close cuts and other unrevealed pictures of CL.

CL’s charms were shown off through these pictures. She is wearing makeup she hasn’t tried on before and gives off a classy type of sexiness.

CL also gave partook in an interview that accompanied this photoshoot. In the interview she spoke of 2NE1’s new album, fashion, beauty, personal likes, and about what she is like in everyday life.

CL’s interview and her photoshoot will be revealed in the March edition of “Bazaar.”

Meanwhile, 2NE1 is currently busy preparing for their comeback. Currently their new album is slated for an April release. However a date is not yet set in stone.

Bang Yong Guk kept his promise of baring his abs!

Well, the boys swept 13 rookie awards, so he kept his promise and tore his shirt off during his solo stage to the delight of all the fans, revealing his perfect abs. This was the first time Bang Yong Guk had completely gone topless for his fans, so he made his fans swoon with his body.

Hopefully, B.A.P will soon be holding solo concerts in your country so you can see his abs in person, too!
( Collapse )

As it’s officially February 26 in Korea, CL is celebrating her birthday today, and the family that makes up YG Entertainment wants everyone to know! While the above picture was uploaded by YG Entertainment’s official Twitter along with the caption, “Happy Birthday #CL #HAPPYCLDAY,” the birthday girl soon followed suit with an Instagram version of the same picture.

Others who joined in the 2NE1 leader’s happiness include maknae Minzy. The first to tweet about CL’s party, she uploaded the following picture of her outfit and announced, “Cherin’s [CL's real name] birthday party go go!” 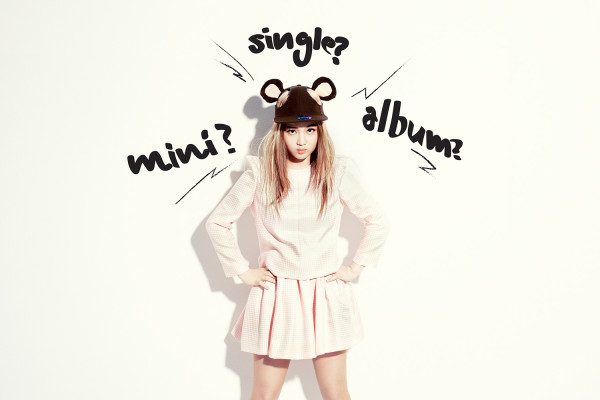 Eric Nam, following his 5th place finish on MBC’s “Star Audition: Birth of a Great Star” Season 2, is the newest member of the B2M Entertainment family, which includes popular artists such as Lee Hyori, SPICA, and SS501 members Kim Kyu Jong and Heo Young Sang. He is currently promoting his first mini-album “Cloud 9,” which dropped on January 23rd, including the title track “Heaven’s Door.”

I was introduced to Eric through my friend Christine, an OG Soompier and the producer of Kollaboration, the nationwide talent competition that empowers Asian-Americans through entertainment. She got to know him when he directed the first-ever Kollaboration show in Boston. When I heard that Eric was also an old-school Soompier, I thought of presenting him as a fan, like the rest of us, who managed to bring his dreams of becoming a K-Pop artist to life. As we exchanged emails over the days leading up to his debut, I found that while this is all true, there was a surprising depth and breadth to his life experience that was both intriguing and refreshing.

This is a long but interesting read. I tried to highlight the best parts. Does anyone else find it hard not to be inspired by Eric?

tl;dr born ('88) and raised Atlanta; did lots of volunteer work in Latin America; knows English, Spanish, Chinese and is learning Japanese; he was never a trainee; he likes a lot of Kpop singers and Korean singers not considered "Kpop"; he plays the panio and cello; toured in Italy and got to sing for mass at St. Peter’s Basilica in Rome with Atlanta Boys Choir; wants to be an inspiration for others; is in B2M Enterainment with Lee Hyori (one of his first Kpop crushes!) and SPICA among others 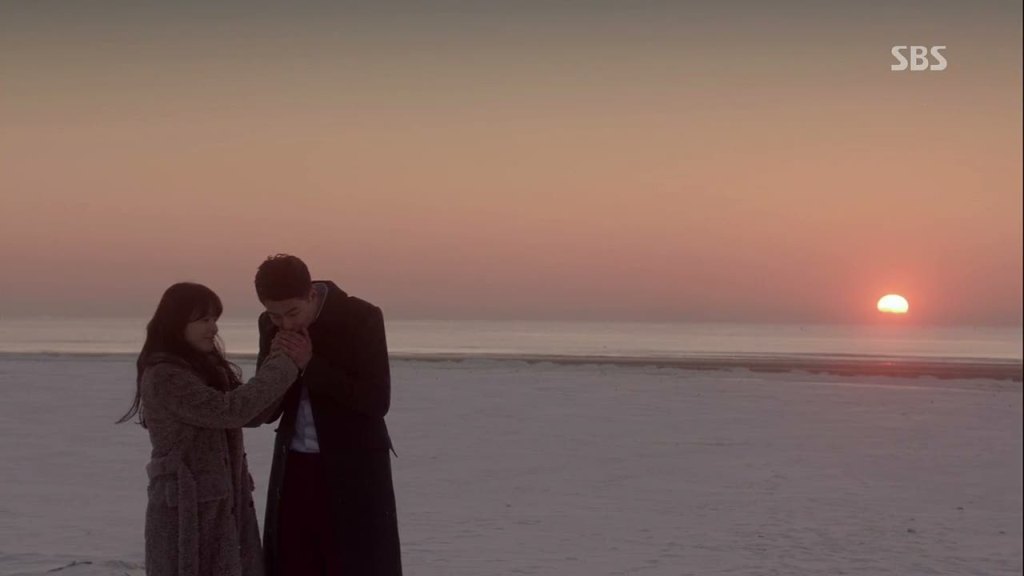 Watch episodes 1-5 at Viki OR DramaFever

Gaining much interest before their official debut, rookie idol band Iconize has finally released their debut single ‘With Iconize’.

Their title track “I Am a Very Talented Child‘, was made by the producer of Buzz, Go Suk Young and the song’s mid-tempo beat combined with its personality filled lyrics, creates a fresh, new generation sound.

As the "wholesome girl makeup" of f(x)'s Sulli, who has most recently been selected as Etude House's model, became a topic of interest the related product is gaining much popularity and receiving attention.

The Baby Choux Base from the Sweet Recipe Makeup Collection which Etude House has most recently launched was noticed as the product used in Sulli's self makeup video, a topic of interest among netizens, and set a record when the 100,000 unit stock sold out.

Baby Choux Base is a product which includes only the positive qualities of makeup base and primer and simultaneously helps correct skin tone and clears the skin's complexion.

According to Etude House, this product creates a complexion that is dewy within yet soft and smooth on the surface, and the silky control powder controls sebum to maintain a soft and smooth complexion without oiliness or shine for a long period of time.

In addition, if one selects and uses the hue that suits one's personal skin tone between the three hues of mint, pink, and peach, a natural but smooth porcelain-like makeup look is achieved.

In particular, as the Baby Choux Base became known as the product that Sulli used when she most recently appeared on a beauty program and showed a makeup look that was natural like a makeup-free face yet cleanly corrected of blemishes and skin tone, consumers who are seeking the product are continuing to make inquiries even after it became out of stock.

An affiliated representative of Etude House expressed, "As Sulli's self makeup secret method rose on the real-time search rankings on portal sites and gained popularity, the interest from customers in the Baby Choux Base, which became known as Sulli's makeup secret, is explosive," and "As a product that can correct skin tone and complexion with a natural look like that of Sulli, who produced a makeup look with a wholesome girl feel, the sales increased more and more through the word of mouth of customers and we are planning to enter into additional production."

I am disappointed Woohyun isn't the guy in the tub.
Collapse