Junsu gets his revenge for this and, obviously, results in group nipple play. 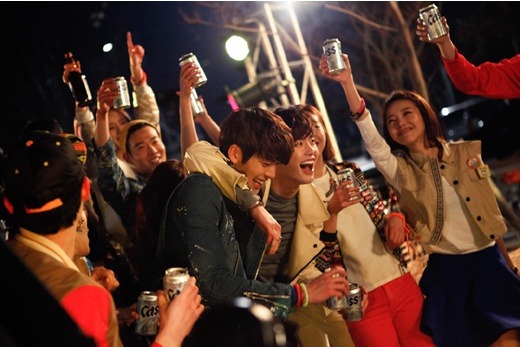 Following the drama as ‘Best Friend’, actors Lee Jong Suk and Kim Woo Bin sparks discussions over their photo of an advertisement.

Recently, an online bulletin published a photo of them together from a scene titled as, “Kim Woo Bin and Lee Jong Suk CassCF Scene Still (capture)”.

In the photo, Kim Woo Bin and Lee Jong Suk are surrounded by a lot of people with a beer in hand. It is a scene where they are dancing in a club, as seen in the photo, Kim Woo Bin was enjoying the atmosphere with a delightful laugh that seems to burst, and you can feel a vibrant atmosphere with Lee Jong Suk’s distinctive killer smile. In particular, Kim Woo Bin was compelling a sense of fashion different from the tracksuit pants that Lee Jong Suk was wearing, adding confusion about what the content of the CF will be.
( Collapse )
source: TVReport News translated by withljongsuk 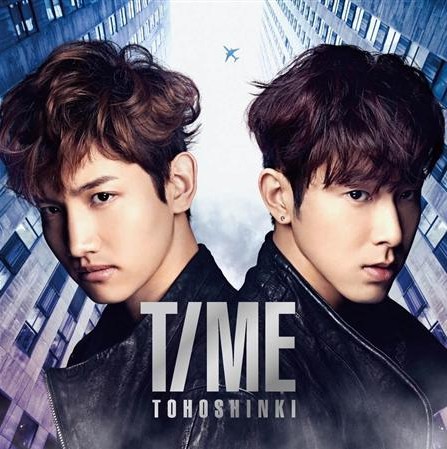 " TVXQ has set another record in Japan!

Oricon announced, “It’s the first time since Avril Lavigne‘s ‘Every Damn Thing‘ that a foreign artist sold more than 200,000 copies for two consecutive albums in the first week, this last occurred 5 years and 11 months ago. For a foreign group, the only other time this occurred was 12 years and 10 months ago when Bon Jovi achieved it with ‘Crush‘.” "

I hadn't paid much attention to them before but their new single has been on repeat even already & I'm already in love with 'Easy Go' & 'Don't Trust Her'. Good luck with your sexy concept girls!!!

Out of the celebrities summoned for propofol abuse, it has been revealed that Park Si Yeon and Lee Seung Yeon had been administered propofol more than 100 times.

The Seoul Central Prosecutors’ Office released their intermediate investigation results, where they revealed that they would be charging two doctors and a ‘Lee’ that has been administering propofol. They also indicted Park Si Yeon, Lee Seung Yeon, and Jang Mi In Ae, who have been regularly administered propofol 100 times or more. For 4 others including Hyun Young, who had a small amount of propofol adminstered for a short time, a fine will be issued.

Jun K: I really want to go to Greece! Invite me please!
Greek fans: Please! You have fans here! (goes on about country)
Jun K: *tries to decipher* WOW! (LMAOOOO)

Taec was being so snarky to the Cali fan who didn't have posters of them in her wall. "You guys should send me some.." Taec says, "So you want us to send you some NOW..."

So many funny and awkward moments, lol. The other members are really catching up with their good English. Wish Chansung was here!

smh @ intel's flop timing this should have been released last summer

With Gangnam Style playing all around the world, a songwriter decided to pick a fight with YG Entertainment, claiming that the song was plagiarized.

On March 14, YG Entertainment revealed that there was songwriter who claimed that Gangnam Style was copied from his own song.

“Last year (2012), there was one songwriter who filed a lawsuit against Psy’s Gangnam Style,” said YG Entertainment. “But it’s pretty easy for anyone to figure out that Gangnam Style was not plagiarized from the songwriter’s song.”

It was also revealed that the song, titled Bad Style, was released in November, four months after Gangnam Style. The songwriter was claiming that YG Entertainment stole his product from the past.

“There were a couple of forceful cases like this. We don’t necessarily feel the need to take drastic action against this,” added YG Entertainment. “The lawsuit asks for monetary compensation. It appears that this person is using Gangnam Style’s popularity to receive money.”

The monetary demand is said to be more than 100 million won.

Meanwhile, Psy will be holding a concert on April 13 to reveal his new single.

“I have a complex,’’ explains Won Hee, a petite 27-year-old office worker as she points to her chin, which she says is unshapely. “This surgery is for me. It’s to improve my self-confidence.’’

Won is sitting in the courtyard of a medical complex in Apgujeong-dong, southern Seoul ― the nexus of the nation’s plastic surgery boom. She has just consulted with a doctor about a procedure to shave her jawbone into the narrower “V-shape” favored among Koreans.

From where she sits, one looks up and sees six floors of clinics specializing in the full range of procedures from the popular double-eyelid surgery, which makes the eye appear bigger; to tummy tucks and nose jobs, to the more invasive jaw reduction that Won wants.

If you were ever curious how super skinny idols can have such toned stomachs, the secret has now been revealed!

On March 13, SBS’s “Midnight TV Entertainment” revealed that the very secret is none other than body makeup.

Rainbow’s Go Woori recently confessed during a variety talk show, “There are many people who draw in their abs. My abs, which was recently a hot issue, was also drawn.”

there's a video for the segment but I can't embed it, click here to watch it

With North Korea's threat of war looming over the country, 112 is receiving an explosive number of calls asking what will happen in the event of a war.

On March 14th, the Kyungnam Police revealed that they have been receiving an influx of calls and texts from the 11th through the 13th since North Korea declared the 1953 armistice invalid. They've received a total of 800 texts in total thus far.

The questions range from innocent inquiries like "Is North Korea stronger or is America stronger?" and "Where will North Korea shoot their nuclear weapons?" to pranks like "Will I be drafted as a student soldier in the event of a war?" and "Is our country screwed if we go into war?"

Most noted, however, are questions from teens and elementary/junior high school students who are calling by asking for a certain celebrity to be saved. "Please save our INFINITE oppas first if we go into war."

A representative said, "We've been receiving 300-400 calls a day and we're afraid that it's going to interfere with our work. We're trying to calm everyone but students are spreading groundless rumors that are causing more unrest. The schools need to talk with them about this."

The mini album is called "Life" and it comes out on March 14th. With just days away from their comeback, EvoL shared the unfortunate news that member Hayana was recently sent to the emergency room due to health complications resulting from stress.

Hayana, who was practicing for her comeback stage and upcoming album release in the practice room on the 13th, had to halt filming for her group’s choreography video upon experiencing severe abdominal pain and was immediately rushed to the hospital.

Stardom Entertainment revealed, “It is unfortunate that we have to experience such a thing following news of their comeback. We will manage our artists to steer away from the internet backlash, and we hope that rumors that haven’t been verified by EvoL or Stardom Entertainment don’t blow out of proportion. During that time, the EvoL members’s comeback was delayed due to unfortunate happenings unrelated to the group. But they kept on working hard to prepare the best comeback stage. We will support them to the best of our ability so that all five members can perform the stage they dreamed about in a healthy manner.”

I don't know if this is her title song, but I really like it! A great mix of cute and sexy but not too much of either imo. Also Ilhoon and his star hair clips are qt. 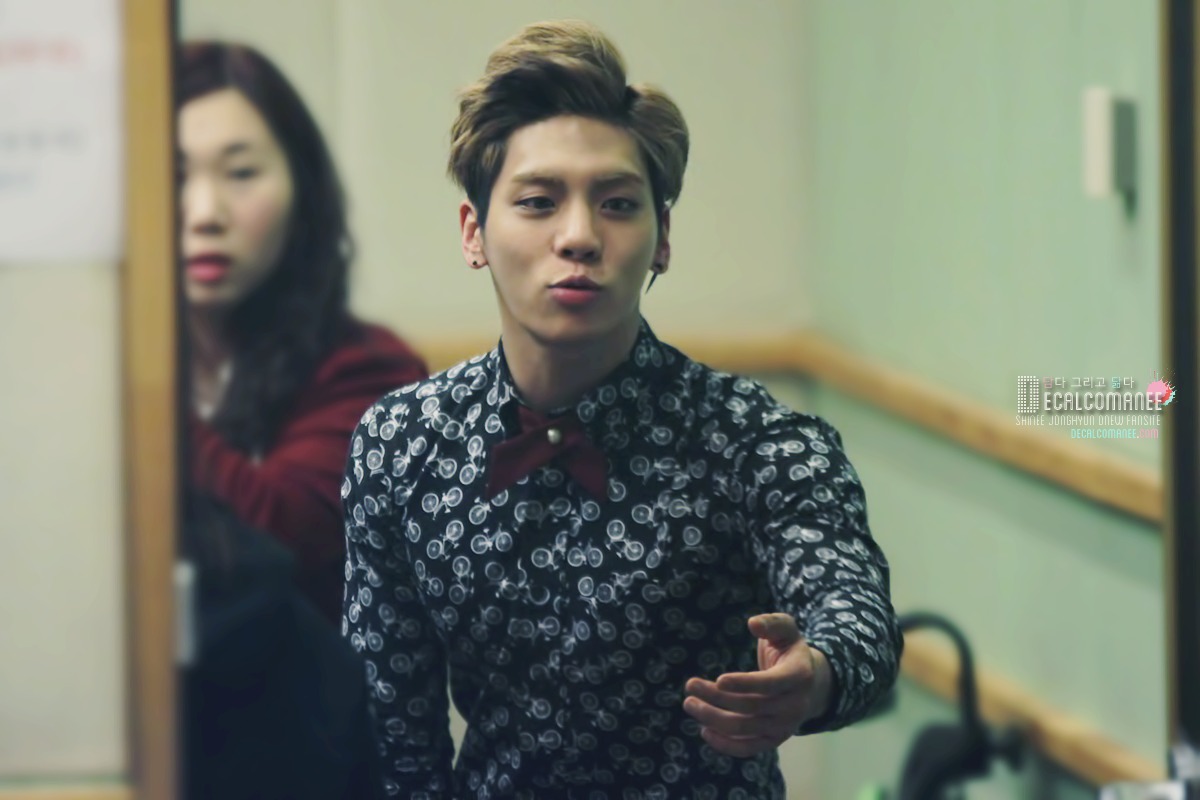 SHINee's Kim Jonghyun appeared on Kiss the Radio on March 13 where he performed several covers, reaffirming his role as SHINee's lead vocalist (looking at you

meridianslair). Check out the covers below!

This cutie. Messing up the mic and everything. He got sooooo into "See Through!" I wish he'd do songs like that for his solo featuring Key instead of "Internet War" ;~~;


So it begins! I wonder if she did business with Daniel.

Detailed look at the role that managers play in securing singers slots on music shows.

Some Top Celebrities Rumored to be Involved in Ongoing Drug Investigations

Praying for a "weed" tag.

So, who do you think will get caught next?

You may soon be seeing an SM Entertainment-produced variety show!

After merging with AM Entertainment back in September, SM C&C has absorbed video content producer Hoon Media.

Hoon Media is a major player in the video content production business, producing an incredible number of hit variety shows such as ‘Happy Together ‘, ‘Heroine 6‘, ‘Music Bank‘, ‘1 vs 100‘, ‘Qualifications of Men‘, ‘Vitamin‘, and much more.

Since SM C&C has merged with the company, SM C&C now has a foundation in place to start creating their own TV programs and variety shows. SM C&C already houses many of the top MCs such as Kang Ho Dong, Shin Dong Yup, Lee Soo Geun, Kim Byung Man, and Jeon Hyun Moo. With this merger, they may soon be using this talent on their own variety shows which could air all across Asia.

SM C&C said, “Through this merger with Hoon Media, we’ll achieve even larger growth in 2013 with the content business as our background.“

I.. Don't know what to think about this.
Collapse