The March 29th episode of CulTwo's Veranda Show featured a segment on sasaeng fans along with a special sasaeng fan guest at the studio.

- Sasaeng fan 'L' who's been a sasaeng fan from her 2nd year of junior high to 3rd year of high school: "(I became a sasaeng fan) because you can talk to the celebrities. When you wait at the dorms or other places they frequent, they start to recognize you and you can talk to them. I went because you could get closer. When they recognize you, you're overcome with a feeling of pride, possession, and other imaginative thoughts."

- To get into the dorms, sasaeng fans will use one fan to distract the security guards (pick a fight, etc) so that the group can get past the gates and to the dorm. They'll hide in the storage room or the attic.
( Collapse )
TV Report via Nate | Netizenbuzz

The boys of Shinhwa are back with their sleeves rolled up. 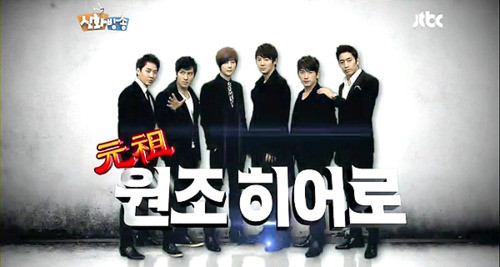 After a month long break, the group’s namesake show, “Shinwa Broadcast,” will be back on television with a new format. The updated format takes the shape of a food variety show in which the members compete to cook up the best meal for various families. Included in the competition will be the mothers of these families and the rest of the family members will have to figure out which meal was cooked by their real mother among the choices provided by the competing members. The families will be chosen among celebrity families and will not be limited to the mother figure but will also include mother-in-laws, husbands, and wives as viable competitors.

If the previous format of “Shinhwa Broadcast” mostly drew in young viewers, the producers of the show hope to reach a wider demographic with the new format.

“Shinhwa Broadcast” returns April 7 on JTBC. Can’t wait to see what antics the forever man-boys will come up with this time!

source: jaybumaom0425 @ yt
I've been burned many times judging a song by it's teaser, but I think I'll like this one.

I was squealing so much throughout this interview, I thought I would share the feels. The best parts are troll!Soohyun, Dongho's English and talking about AJ and psychology.

Man In love + Be Mine

After her stunning success as one of the ‘monster rookies’ of the past few months, soloist Lee Hi is becoming more important in YG Entertainment‘s future plans.

According to a YG representative, CEO Yang Hyun Suk has personally directed Lee Hi to become fluent in Japanese within three months. This is in preparation for her upcoming Japanese debut, which will be held in conjunction with Avex.

As one of the top record labels in Japan, Avex has previously partnered up with YG Entertainment for 2NE1 and Big Bang‘s Japanese debuts.

The ‘K-Pop Star‘ rookie’s overseas debut is slated to take place within this year.

North Korea said Saturday that inter-Korean relations have entered into a state of war and all cross-border issues will be dealt with in a wartime manner, the latest in a near-daily series of strident threats against the South in recent weeks.

The warning came a day after North Korean leader Kim Jong-un put strategic rocket units on standby, threatening to strike targets in South Korea, the U.S. mainland, and its military bases in Hawaii and Guam, in anger after nuclear-capable U.S. B-2 stealth bombers participated in joint military drills in the South.

"From this moment, the North-South relations will be put at the state of war, and all the issues arousing between the North and the South will be dealt with according to the wartime regulations," the North said in a special statement issued by the country's government, parties and other organizations, according to the Korean Central News Agency.

Article: Reality behind trainees being used for sexual favors revealed "$1,000 if you're a trainee from a big agency" shock

Former celebrity trainee revealed, "I was a minor at the time but still received countless offers to go out and drink with (the higher officials). There are actual entertainment agencies who downgraded into becoming brokers to hook up trainees with sponsors."

A broker revealed, "We have the profiles of celebrity trainees, students majoring in the fine arts, miscellaneous works like home shopping stars, as well as trainees under big name agencies. It costs the sponsor $250 for one meet up with a trainee. If the trainee is young or from a bigger agency, the cost rises to the $800 to $1,000 USD range. Sponsors are asked to make appointments the day before and are required to be registered in the client list."

The episode airs on the 29th.

Mods there is an article on Soompi but it says the same thing except the translation on Netizenbuzz seems better to me.

4minute will return to the sound of their debut album.

A representative of 4minute’s agency, Cube Entertainment, has explained, “4minute recently began to record their new album. The direction of the overall concept has been decided and 4minute will show the groovy and powerful sound that they showed during their debut.”

4minute received much love through their fierce and addictive electric sound during their debut, with songs such as “Hot Issue” and “Muzik.” Through this album, 4minute will put their best face forward with a music style that they are most confident in.

The representative continued to explain, “The members have thoroughly participated in the selection of songs, choreography, styling, and more for this album. The ideas and musical inclinations of the members are expected to be incorporated as is for this comeback. The girls will show an upgraded version of their debut concept on stage. This album is also expected to include self-compositions from the members.”

4minute’s new album will be released approximately a year after their 4th mini album, “Volume Up.” 4minute also promoted through their unit 2YOON and actively promoted overseas. 4minute’s new album is expected to release some time between May and June.

A lot of drama happened in the Hallyu8 forums yesterday, when Hallyu8 user ♡Meli made a post supposedly revealing that EXO-K's Baekhyun made a joke about autistic children.

Flawless Angel!Kris welcomes you to this messy EXO post!