Remember when JYPE announced Sunmi's still training under the company and receiving vocal and dancing lessons but denied her return to the Wonder Girls?
Well, Sunmi might be gearing up for a solo debut right now.

I’m just laughing at the all-over-the-place feeling of Heirs, from the casting to the script concept. But it appears that Kim Eun Sook is going to throw whatever the heck at the board and see what sticks. She’s got established young actors Park Shin Hye and Lee Min Ho returning to high school, if fangirls or fanboys want idols then she’s nabbed Krystal from f(x) and Park Hyung Sik from ZE:A, if it’s the up-and-comers then Kang Ha Neul and Kim Ji Won fits the profile, if it’s the current It Boy then none is hotter than Daddy Gumiho Choi Jin Hyuk. And if she wants to appeal to the crowd that demands talented and quirky, she will give you Kim Woo Bin (who looks like an alien but is too awesome a talent to be bogged down by his non-conforming striking looks) and now Im Joo Eun joins the cast as well.

one on hand yesss she needs more relevance but on the other hand she's too gorg & talented to be playing second fiddle to some of the basic "actors" in the cast and lmao @ her playing a teacher while lmh is playing a student, srsly?

Though she couldn′t avoid being asked questions about the issue, she did manage to avoid answering them. 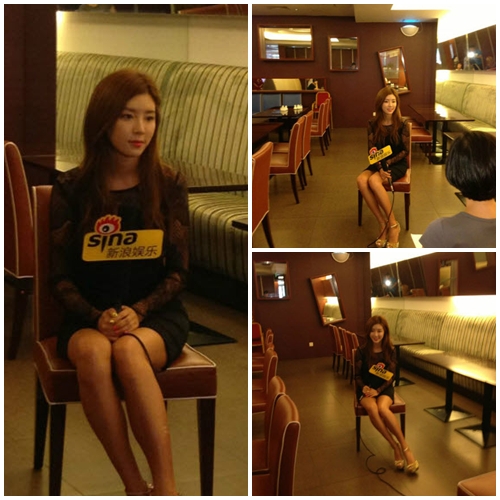 The press conference for Bunshinsaba 2 was held on July 14 with director Ahn Byung Ki and actress Xin Zhi Lei. Park Han Byul appeared clad in a pink and black one-piece dress, shining in her first public event in a while.

She was soon bombarded with questions about her boyfriend, Se7en. The issue had also made it into the Chinese press, being referred to as the ′Se7en massage parlor incident′.

Park Han Byul, however, didn′t open her mouth on any questions about her boyfriend. She also turned down such questions asked during interviews with local media outlets such as Sohu.

The outlets reported, "Park Han Byul didn′t answer any questions about her boyfriend′s massage parlor incident, bringing down the general mood at the venue. Director Ahn Byung Ki had to calm everyone down, asking them to only ask questions about the film."

Bunshinsaba 2 is the sequel to the Chinese remake of the Korean film Bunshinsaba. It is director Ahn Byung Ki′s second Chinese film, and will premiere in the country on July 17.


lol @ "bringing down the mood". she was there to promote the movie, not talk about her private life

2,639 of you took this survey and these are the results! You, the members, non-members, the lurkers. Thank you for participating.

This post will be a combination of survey + google analytics.
( Collapse )