1. Top actress A is earning some criticism for her active dating life. For the past few years, A has been involved in quite a few dating scandals but none that were brought to public light. Earlier this year, industry reps actually found out the identities of the men she's dated, causing her image to downgrade to an 'easy woman'. Even among other fellow actors, A's active dating life is on the chopping block. One rep said, "There's no end to A's tastes. From stars to even 'normal' celebrities, she's dated them all." B also shocked the people around him by revealing, "She dated me for three years but it seems she dated others during that time as well."

2. There are many actresses who enjoy posting up selcas, two being C and D in particular. They put up a lot of fan service on Twitter through their selcas whether they're working or on hiatus, but the one thing they both have in common is that the progress of their plastic surgery treatments can be clearly seen. Their dramatic transformation can be seen in their jaws, noses, and eyes. One insider said, "I can understand why they'd want to document their faces so much since I'd be shocked myself seeing myself so changed every time I came out of surgery. Women who get breast surgery often become addicted to taking bikini photos."
( Collapse )

CEO Yang reported the following during his phone interview with a reporter on the 5th, “Keeping the promise that we made about the ‘WIN’ teams and how one of the two team’s victory depends 100% on viewer votes and solely on the viewers’ votes is the most important thing” and that “I announced during the first production press conference and on the first episode of the show that the winning team will debut immediately after the show is over and that the losing team will either disband or spend many more years training, however I (and YGE) think that a definite disbandment for the losing team is the better way to go once the winning team is separated away.”

CEO Yang Hyunsuk continued, “There is no doubt that both teams have gained much popularity, fame, and fans through this program, but because of that first promise we made with the public and people, and to follow the original guidelines and rules set forth on this show, the losing team will officially and immediately disband.”
( Collapse )

i hope he realizes that the winning team will be gaining a lot of antis who want nothing more than the winning team to fail. if he was smart about this he would do a 2am/2pm concept. and lol im sorry but im so embarrass for team b. damn that must suck to be getting called out like that AND putting the company you train at in a possible legal matter.

6-membered T-ara revealed a cute picture of T-ara on the 4th. The members were in their costumes and said "We are finally coming back in our own country after a long time, so our hearts are nervous."

T-ara's music video shoot will be over two days, October 4-5, with the first day being completed today.

T-ara hope that "Number Nine" can be popular throughout Korea with it's two contrasting appeals. The performance and music video is also supposed to be spectacular and is directed by Zanybros Hong Wongki.

T-ara will comeback first at the Hallyu Dream Concert on the 6th, and then have their broadcast TV comeback on the 10th which is the same day they will release their 5-song mini album.

wtf is with the back and forth thing
QUA gifs here

Kang Moo Yeol is a third-generation chaebol who has the both the looks and wealth, seems to have it all on the outside, but grows up with family issues and pain from the loss of his past love Han Yoo Rim. Meanwhile, Han Yoo Jung is a diligent and bright, and very independent woman who has a tomboyish and unruly personality which helped her overcome the sudden loss of her family. She is Han Yoo Rim's younger sister and will get involved with Kang Moo Yeol 10 years later. Both Kang Moo Yeol and his half brother Hong Soo Hyuk will fall in love with Han Yoo Jung. But, Moo Yeol and Yoo Jung are star-crossed lovers. Their tragic love story begins because of a tragedy due to their parents. How will they escape their dreary surroundings to succeed?

DON'T GIVE A CRAP ABOUT THE DRAMA AND JUST WANT TO WATCH SEOACTRESS??? soshified has subbed her cuts ep1 and ep2

sorry this is late, i tried to put my fist through my face after watching glee

Song is fun and video is pretty creative 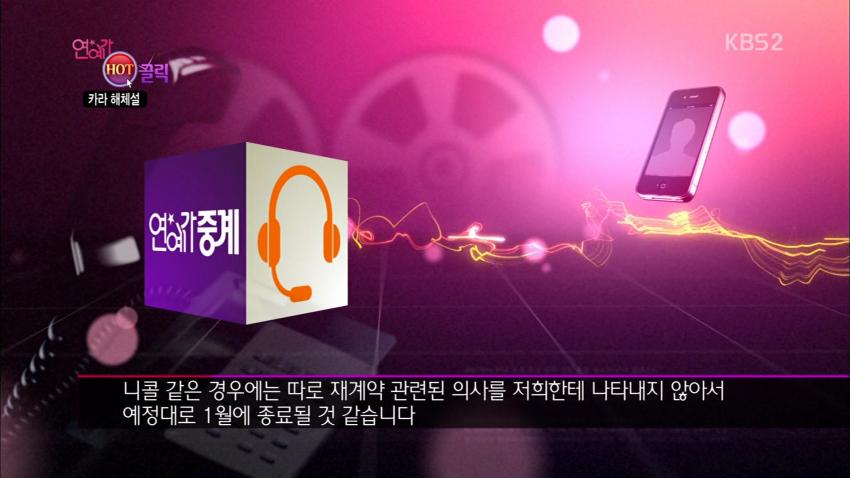 In an interview with KBS, DSP released this information, "For Nicole, she has not shown us ANY response regarding the contract renewal. So, we are assuming her contract will expire in January."

Nicole has not shown any indication, meaning she didn’t say a thing. Everything so far is in verbal from the three girls (Seungyeon, Gyuri and Hara). Nothing is concrete. Jiyoung has 7 months to go on her contract, of course she is gonna say she is still thinking.

for a timeline as to going with kara's contract stuff


september: contract stuff going fine
octobr: -japanese tabloid says kara is disbanding after tokyo dome
- dsp denies kara disbandment
- dsp says nicole has not resigned, that gyuri, hara, and seungyeon resigned for two years & jiyoung's still thinking about it
- dsp tells kbs that nicole hasn't actually talked to them and that the others only gave them a verbal agreement

SHINee's Key is on the chopping block because of a scheduled musical cancellation due to his team's promotions. Currently starring in the musical 'Bonnie & Clyde', the performance scheduled for the 10th had to be canceled because it overlapped with SHINee's comeback schedule.

A representative of the musical said to MBN Star, "Because of SHINee's comeback pre-recording, we had no choice but to cancel the musical performance. We refunded the audience members who requested it and rescheduled it for the 25th. Although we have Um Ki Joon, Han Ji Sang, and Park Hyung Shik in the same role, it is impossible to switch out the cast due to schedules already being confirmed. Especially in the case of Key, him being an idol means that the majority of the ticket sales are his fans so it's difficult to switch him out for someone else."

Alumni Behind the Scene 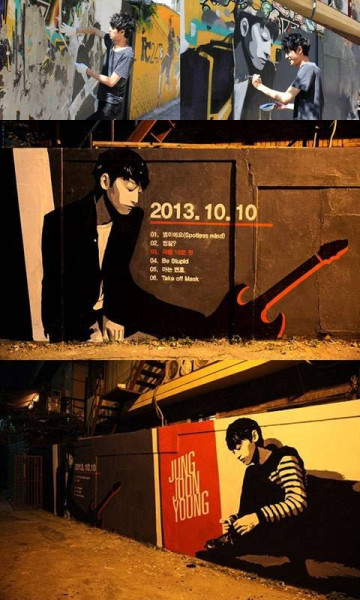 Jung Joon Young got artsy for his debut album tracklist by painting it on a wall near Hongik University with the help of art students!

The singer, who impressed with his debut single and pre-release "Spotless Mind", tried to do his best in helping out the art students, taping boundaries and painting the background. Laughs were brought when Jung Joon Young attempted to draw the guitar on the wall himself, but he ended up needing the art students to re-do his drawing.

In addition to the graffiti art, the singer also revealed the tracklist to his upcoming album through the decorated wall.
His agency CJ E&M stated, "The sound quality was the focus of this album which will showcase his thoughts on the sound of his music. Rather than giving a feeling of a mechanic sound, we teamed up with some of the best engineers in the studio to record a real sound that comes across like live music. The core of this album is the new color of music that stems from the high quality sound and rock music."

Apparently this is the ending theme song for the J-drama "Tokyo Toy Box" starring Kamame Jun. No word yet on when/if/how this song will be released in its entirety.

Party Starts Sunday, October 6 8:00PM KST
(here's a time converter in case you need it, although it's probably happening as you're reading this...)

up bright and early, shinee's got me hyped, waltzing into this post feeling good.