SISTAR will be representing Korea at the ABU TV Song Festival 2013. The festival is held in Hanoi, Vietnam on 13.10.26

S.M.ENTERTAINMENT is set to open a ‘SMTOWN HOLOGRAM V-THEATER with UNIVERSAL STUDIOS JAPAN’ at UNIVERSAL STUDIOS JAPAN.
Starting from December 13th to February 16th 2014, S.M. will demonstrate Hologram shows of S.M. Artists’ live performances, displaying the viewing system in a three-dimensional form, as if the artists were presented live in front of the audience.
‘SMTOWN HOLOGRAM V-THEATER,’ not only provides the opportunity for fans to easily watch their favorite artists performing live in multiple locations at the same time, but with superior high quality contents, it is also expected to receive greater attention as a pioneering entertainment scheme.
Inside the ‘SMTOWN HOLOGRAM V-THEATER’, an exhibition area and a live performance area to screen the hologram are provided. It is designed to view the exhibition of different items such as pictures, costumes, and merchandise products of the artists, then to enjoy the holographic concert of 5 teams; TVXQ!, Super Junior, Girls’ Generation, SHINee and EXO.

2AM to release a new mini album in November
2AM is finally set to release a new mini album next month, so if you've been craving some 2AM ballads, make sure you stay updated!
This comeback will mark their return in eight months since their album 'One Spring Day' last March. The album concept will be 'nocturne' which is also the title of 2AM's upcoming Christmas concert.
However, with Jinwoon's unfortunate injury, it is not yet confirmed whether the group will be promoting the release. Big Hit Entertainment stated, "The details concerning their comeback will be decided after checking on Jinwoon's recovery. It will be an album that will not disappoint fans who love 2AM's ballad music."
The ballad idols will also hold their '2013 2AM CONCERT-NOCTURNE' at SK Olympic Handball Gymnasium on December 7-8. 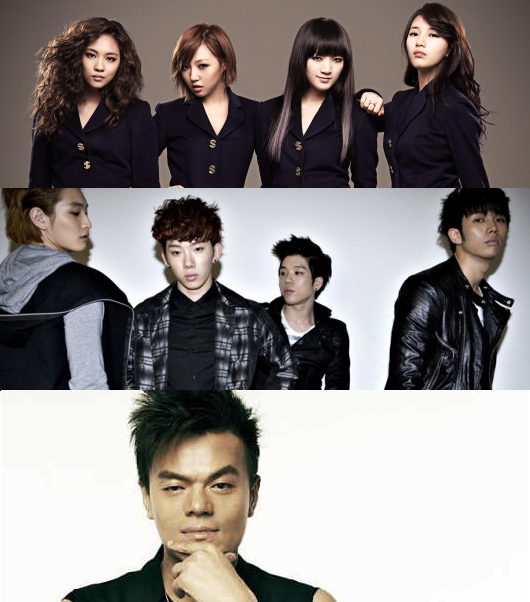 J.Y. Park reveals his crazy schedule working on miss A's November comeback, preparing for new group's debut & more
Earlier this month, miss A's Min hinted to her fans that the group will be making a comeback this year.  Well, here is the additional information everyone has been waiting for!
J.Y. Park, who recently returned from his five night six day honeymoon, is already being quite the busy man!  Starting on the 21st, he started to take part in filming for SBS's 'K-Pop Star 3.'  Starting on the 30th, he returned to KBS 2TV's 'Cool Kiz on the Block' and will continue on the show until December, meaning he will have to participate in two shows at the same time for a few more months.
In addition, JYP Entertainment fans, J.Y. Park is producing miss A's new music set to be released in early November!  That means within a few weeks, the fierce girls will be back.  However, that is not all.  J.Y. Park is also preparing the launching of his new group for next year!
Lastly, he is going to have a concert called 'Bad Party - The Halftime Show' from December 19 to 22 at Seoul Bangi-dong's Olympic Park.  He is sure to get super fit with the concert dancing practices and the basketball games in 'Cool Kiz on the Block.' He also has many various exercising equipment at his house for the newlywed couple so he could do some weight training.
A rep of JYP Entertainment said, "On top of being in shows and preparing for his concert, he also is producing for the new group debuting next year so that he has not a single day of rest . . . From singing to producing, his activities are spread over a wide terrain."
Hopefully, he still gets enough rest and manages to take care of his health as he lives by this crazy schedule!

note: miss A's title track is rumored to be produced by E-Tribe, JYP and Team Onesound (Oneway) are working on other songs from the album. Also, no one knows what group JYP had in mind - the girlgroup or one of the upcoming boygroups. 2PM is also working on a new korean album.
allkpop 1 l 2 Sports Donga

Nominate Non-Kpop female biases in this post. I know girls don't get the same amount of interest, esp actresses but I hope people can nominate as many as possible. Counting on you Omona. Remember the nominations must be Actresses, models or MC's. Just as long as they're Non kpop.

Voting will start on Monday. Till then enjoy.

Since their debut in 2006, Big Bang have transformed from being just another K-pop group to becoming true global music icons - redefining what it means to be true artists in the K-pop music industry. Mnet America proudly presents HEADLINER, featuring G-Dragon, Taeyang, T.O.P, Daesung and Seungri. See how they rose to the top to become the trendsetters we know today.


Watching this made me love them even more :')

Seriously though, is it? I'm not getting excited quite yet b/c this could just as well be your usual run-o'-the-mill idol talk pandering to what the fans want to hear in the respective country they're at right now. Yet other people seem to take a concrete announcement for a Germany concert in the next couple of months (???) from this?
Either way, Young-Jae's German is adorable. :3

In the midst of her success with her latest album 'Modern Times', IU has been caught up in a plagiarism controversy over "The Red Shoes".

Many listeners have been commenting that the track, composed by Lee Min Soo and lyrics written by Kim Ee Na, is noticeably similar to Nekta's "Here's Us", which was released in 2009.

Not only have some netizens compiled comparison clips of the two songs, but the phrase "IU The Red Shoes plagiarism?" has been climbing the ranks of search terms.

look at akp sourcing so many sites!!!1

This is the second one that I have seen. I don't know if everyone remembers the one with Shinhwa's This Love, but I believe its the same person 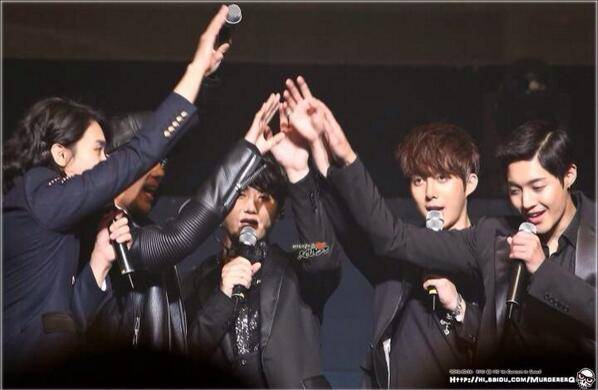 Check out photos of Girls’ Generation at the “No Breathing” VIP premiere below.

I couldn't find individual cuts for everyone :\ But it was a good episode!
Collapse