via 스제N님의 채널 and arirang radio

( Collapse )
for those of you that don't know they're in the same company
hehe he has a one piece notebook. I hoep the rest of u-iss post up some covers ;_;

Popular Korean actor and singer Seo In Guk is best known for Answer Me 1997 and Master's Sun, but he first became famous for winning the Superstar K talent competition for singing. When asked to choose between singing and acting, Seo said that they were like both his hands, and he felt he wouldn't give up one for the other. His fans would agree as we love him in everything he does, and in this latest photo-shoot, he shows both his lovable cuteness and charming masculinity.


Seo In Guk recently did a photo-shoot for InStyle Korea's July magazine, and he also discussed how he felt about singing and acting. Here's his full answer to the question about choosing between singing and action:

"This question is a bit difficult, so I prepared for it. I can use both my hands well. To make me choose one from being a singer or an actor is like making me use only one hand. I will work hard to excel in both areas. I think this is the most accurate answer."

During the photo-shoot, Seo put on sleek outfits and showed his irresistible good looks in different surroundings.
He also mentioned his new romance comedy drama, King of High School, where he plays an 18-year-old student who pretends to be his older brother who works at an IT company. And of course he meets an older woman. This sounds totally like a fun noona romance.

Seo revealed that before he got on Superstar K, he was so poor that he would stay at friends' places and moved around a lot. He said he would frequently remind himself of the difficulties of the past so that he wouldn't forget his roots. He is definitely an impressive young man on the rise, and we'll surely continue to see him succeed in a career combining singing and acting.
[InStyle Shoot]

idk until when this link will be viewable! 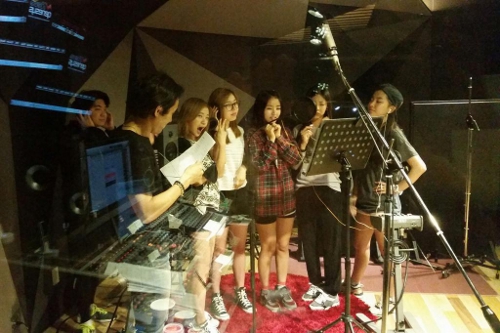 I recommend watching the Umbrella cover. 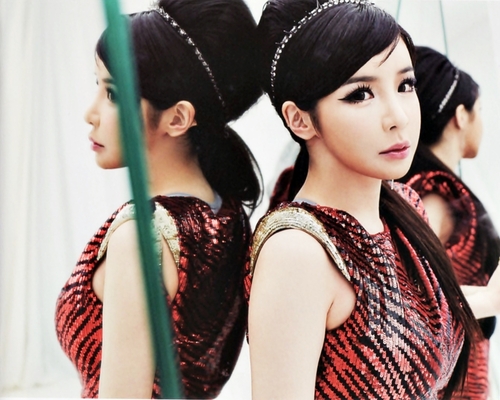 2NE1 member Park Bom will not be attending next week’s filming for the variety show “Roommate.“

On July 5, Park Bom said through her agency, YG Entertainment, “I am very sorry to all for having a great controversy because of me. Because I feel terrible, I don’t have the confidence to film for ‘Roommate’.”

Representatives of “Roommate” confirmed her statement that she will not participate in next week’s filming. However, Park Bom will not be edited out of the episodes she had already filmed, and will appear in a few episodes for the next few weeks.

Last week Park Bom was caught up in controversies regarding an alleged drug smuggling case and rumored falsification of information regarding her real age.

MV for the track '더' (which I've seen translated as 'More').

!Parental Advisory!-Lol, well just wanted to let ya'll know. Another side to hip-hop in the K-Entertainment industry. It's moody and angry (lack of better word?/judging by some of the content) and I think some will like it, if only for the producer Nochang, who lends his singing to some of the tracks. This album came out last month! I'm late as usual, lol.

Choi Siwon will be starring in a Hong Kong movie.

On July 4, various Chinese media outlets reported that Choi Siwon was cast in Breaking Through the Wind, to be directed by Hong Kong director Lin Chaoxian.

The singer will appear as a Korean Chinese cyclist.

Breaking Through the Wind will be about how young cyclists overcome their difficulties and strive to achieve their dreams.

The star is currently training in Taiwan.

im going to practice for movie "TO THE FORE" on the mountain in Kaohsiung. It will be fun but tough.. help me! lol ;; pic.twitter.com/Lrp7zlUpcF

I met a new friend in the heavy rain, I gave her a name "Lost" pic.twitter.com/CK1aThtksi

[Section TV interview on the set of a photoshoot, shirtless and with smoky makeup]No subs but worth for the eye candy


Siwon of Super Junior appeared on this week’s episode of the MBC Entertainment news program, “Section TV,” for an interview, greetings fans with news about his group.

Siwon commented that Super Junior was currently preparing for their album, although their title track has not been selected it. As for Siwon himself, he is also busy traveling overseas to film his movie.

Siwon showed a lot of love for his fellow Super Junior members, equating the group to “family.” He added, “I know it is cheesy, but it is true.”

Specifically regarding member Eunhyuk, Siwon called him by the “affectionate” nickname “Stupid Anchovy.” “He is the type of person to give me a razor as a gift.” Siwon explained the story behind the razor which started from Siwon’s growing mustache (which is now gone), “Many people have a misconception of me, but I really like to be comfortable. I was too lazy to shave so I didn’t. It started with Eunhyuk uploading a picture of a razor on his Twitter and writing, ‘Come to the dorm.’”

He also commented on ranking number 7 on ‘The 100 Most Handsome Faces’ chart by saying, “I’m very very thankful. I’m happy about it.”
Then he ambitiously said, “But I would like to rank in top five next time,” and smiled.
When asked what he would rank with his bearded face, Choi Siwon answered, “I think I would rank about 1,234,722,” causing everyone to laugh.

He also mentions getting closer to Kit Harrington (they probably met in London during the Jimmy Choo show), and taking a picture with Kate Beckinsale.

The kid sure is working hard! Get that money I guess

Transcript of video:
● Cultural Revival
Tickets to K-pop male trio JYJ’s concert next month sold out in just 20 minutes.The large-scale concert is to be held in the 20-thousand-seat Jamsil Main Stadium, but the ticket vendor site was flooded with JYJ fans looking to purchase their tickets. 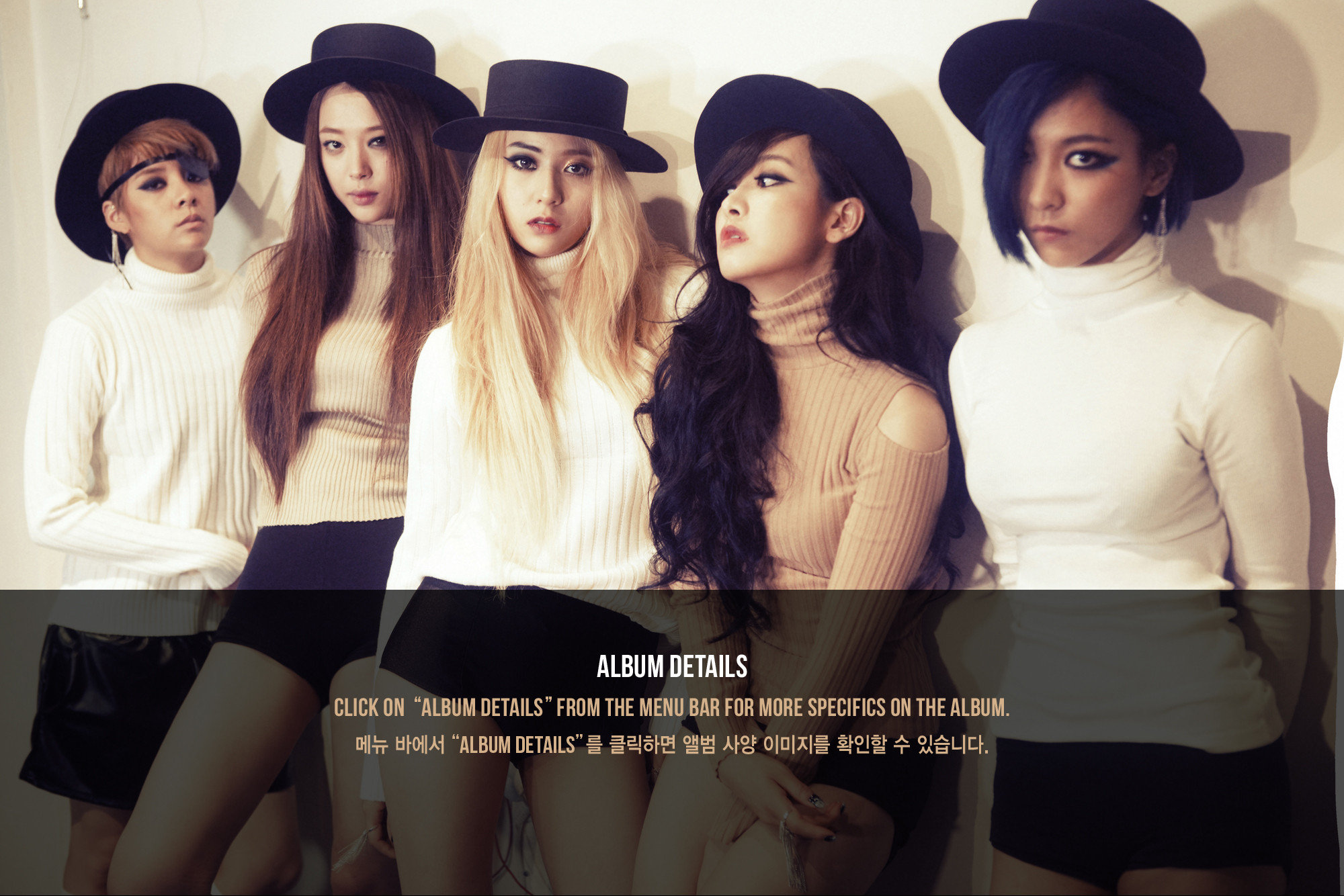 ( Collapse )
You can pre-order the album on YesAsia and KPOPTOWN. There are two versions "sleepy cat" and "wild cat".
Source: f(x)'s Official Website 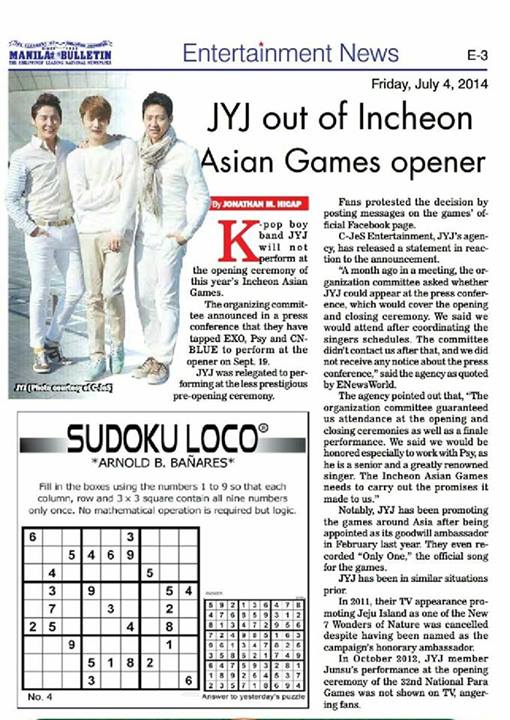 K-pop boy band JYJ will not perform at the opening ceremony of this year’s Incheon Games.

The organizing committee announced in a press conference that they have tapped EXO, Psy and CNBLUE to perform at the opener on Sept. 19.

JYJ was relegated to performing at the less prestigious pre-opening ceremony.

Fans protested the decision by posting messages on the games’ official Facebook page.

One message read, “We want to JYJ perform for the opening and closing ceremonies of the Incheon Asian games 2014.”

Another went, “My wish is for JYJ to be able to perform on the main stage of IAG’s opening and closing ceremony.”

Yet another added, “I wish that you would do the honourable thing and respect JYJ. They have done so much to help promote IAG.” 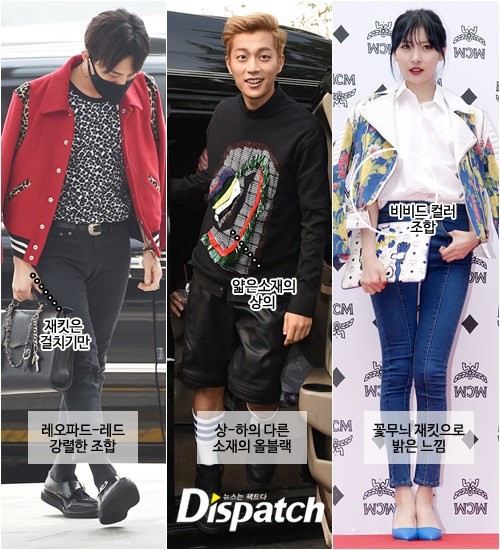 July, the real summer has begun. The sweat oozes out. Naturally, people wish to wear thinner clothes. However, summer of fashionista is the opposite. Their fashion clock heads exactly toward the autumn. They even wear long-sleeve shirts, long pants and even leather jackets.

( Collapse )
sources: CJENMMUSIC Official, pop!gasa
This was actually released about two weeks ago? But no one's posted it here yet and I thought it's quite interesting, so here it is.

submitted twice because i forgot sources
Turn on CC for subs as before.