it's so good crayon pop's next comeback better slay

[INFO] Mamamoo is scheduled to make a comeback in Mid-November with an upgraded sound!

On October 15, ZE:A's Lee Hoo, formerly known by his stage name Junyoung, broke his silence on Twitter and posted, “D-7 10/21 After 9/21.. “
Lee Hoo seemed to be counting down to an event, with 7 days remaining on the counter.

A few minutes later, he posted once again with the text, “Just as it’s shown. Don’t believe it. [Don’t believe everything you see] #zea #moonjunyoung #leehoo #October 21 #it’s October let’s talk honestly,” along with a photo of a receipt and proof of of income document, a cigarette graphic hiding other personal information.
The document reads a 33,200,000 won ($31,188~ USD) yearly income for Moon Junyoung for the year 2013. The average income in South Korea is $31,051 USD per year [1].

source: koreaboo
akp (I know...) Soompi posted a translation of a fan tweet he rt then deleted which divided that amount between 9 members so I'm not sure if this statement is what he earned or what the group made as a whole (or something SE fabricated???) :\ 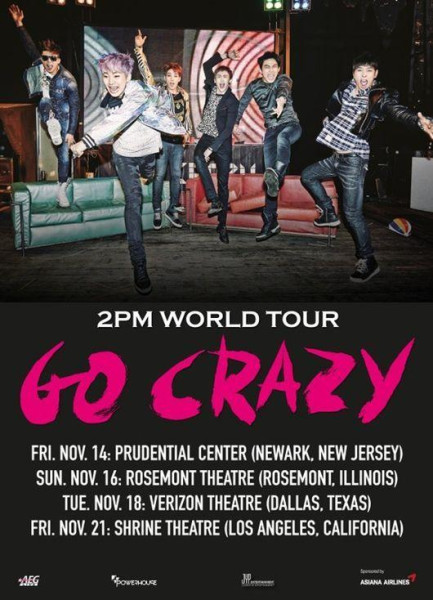 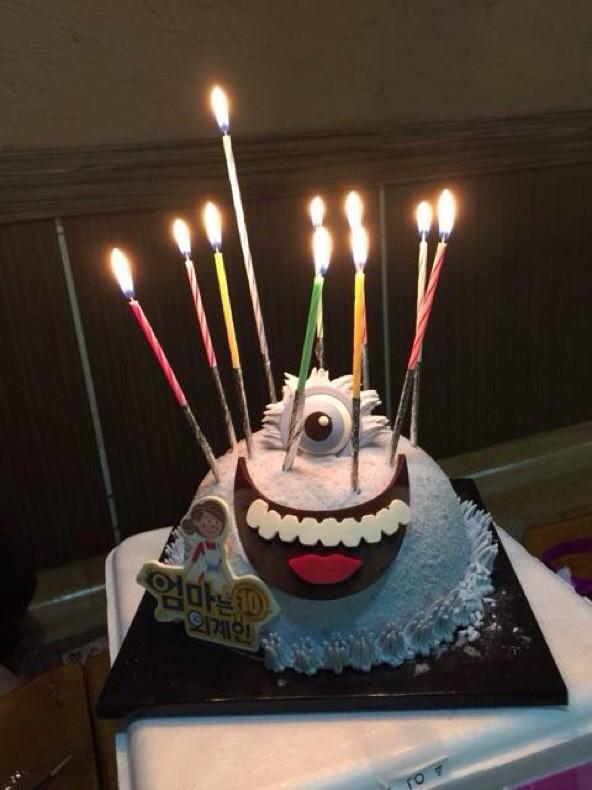 Friendly reminder that Zelo is still a legal minor in Korea (Don't be like the creeps on tumblr/twitter, I beg you Omona)

California has got a healthy amount of B1A4 lately with the K-pop boy band recording their "Solo Day" music video in Los Angeles in May and then performing at KCON 2014 in downtown L.A. this summer. But the rest of the country got a chance to get close to Jinyoung, Baro, Sandeul, CNU and Gongchan via the just-wrapped U.S. leg of their Road Trip tour. And their New York audience sure seemed appreciative of the trip.
While concertgoers weren't fainting like they were at INFINITE and B.A.P's recent concerts, it was most remarkable how intense the fan support was inside NYC's Best Buy Theater.

There was the usual fan hysteria before the guys hit the stage -- like any show -- and it was kept high throughout performances of early singles "OK" and "Beautiful Target." It soon became clear the audience was filled with longtime, committed fans. Every member got huge screams when they sang their lines while the signature "sprout dance" move in the band's "Beautiful Target" choreography had attendees shrieking. B1A4 debuted in the K-pop scene in mid-2011, just as the music was gaining international traction, so these early songs very may have been the initial tracks in helping solidify a new generation of excited, American K-pop fans.

[pretty long article]
The enthusiasm stayed high with yelps and hollers seemingly from any type of slightly suggestive dance move -- whether it was a slight shimmie or a crotch grab -- to any time a member had a vocally challenging riff or rap section. The crowd even yelled supportive chants throughout certain singles. It was all likely comforting for the group who were not totally in-sync with each other during early numbers like "Oh My God" or "Because of You."

But nerves eased as the guys were allowed to get a little more free onstage. After performing "This Time Is Over," the quintet brought a video camera backstage where they showed fans their changing area in addition to a ton of kissy faces for the camera. The boys came back to perform an unexpected, sing-a-long cover of Bob Dylan's "Knockin' on Heaven's Door," led by Jinyoung on guitar.


By the time the guys got to 2014 singles "Lonely" and "Solo Day," coming smack dab in the middle of the setlist, it was clear they were in their element with their sharpest performances up til that point. The "Lonely" number also let B1A4's backing band -- an expense usually not spent for K-pop acts touring the U.S. -- shine with additional live instrumentation added. The four piece (consisting of guitar, bass, drums and keys) was an awesome addition throughout the whole show, but the songs like "Lonely" and "Who Am I" stood out sonically for the added instrumental riffs.
While their backing band was the most striking technical difference between B1A4's concerts versus other recent K-pop showcases, the boys pinpointed to Billboard another reason their show stands out.

"We can't say that our concert is different from any other band," B1A4 leader Jinyoung says via translator. "But what we're trying to do is communicate more with the audience through our music and that's what we think is most special during our concert."

The guys didn't speak a ton of English to the U.S. audience -- though the band agrees that Baro has the best grasp on the language and is "always studying somewhere" -- the fivesome worked hard to make a connection with attendees; whether that was pulling a fan onstage to serenade during "Chu Chu Chu" or going into the camera pit to take selfies with them.

While fans can watch the guys' stateside adventures on Mnet America's Go! B1A4: Road Trip YouTube series, the boys told Billboard they're currently recording new music off-camera. While there is no concrete release dates, CNU says their next release will be related "to the season the album is released during" with Jinyoung adding they're looking to share the music "as soon as possible." They've discussed solo or sub-unit options within B1A4, but the group adds they're opting to keep those types of performances for their concert dates at the moment.

But whether as soloist, units or the full B1A4, it's clear B1A4 has done a fine job established a super-supportive fanbase that will cheer them on while the band pays them back, first and foremost, with performances of high musicality and the occasional selfie.

This gif has no relevance to the post lol but I'm soooooo excited for a possible winter release - it seems like a lot of of i-fans found Lonely boring but it's one of my fave B1A4 songs so I'm hoping for something along that vein or TTW!

Luhan filed for contract termination from SM Entertainment recently, and more details of the situation has surfaced as the lawsuit moves forward.

According to legal circles, on October 15th, the Seoul Central District Court received Luhan’s filing for contract termination from SM Entertainment as Civil Case 46. After Luhan’s filings to the court were delivered to SM Entertainment, there were several written correspondences between the two parties. The initial pleading date for this case will be arranged very soon. However, there is still an opportunity for a settlement to be reached before this.

Just like with Junyoung's income statement, I'd love to see the figures on how much the company took in and what the expenses were vs. how much of that the artists actually saw. 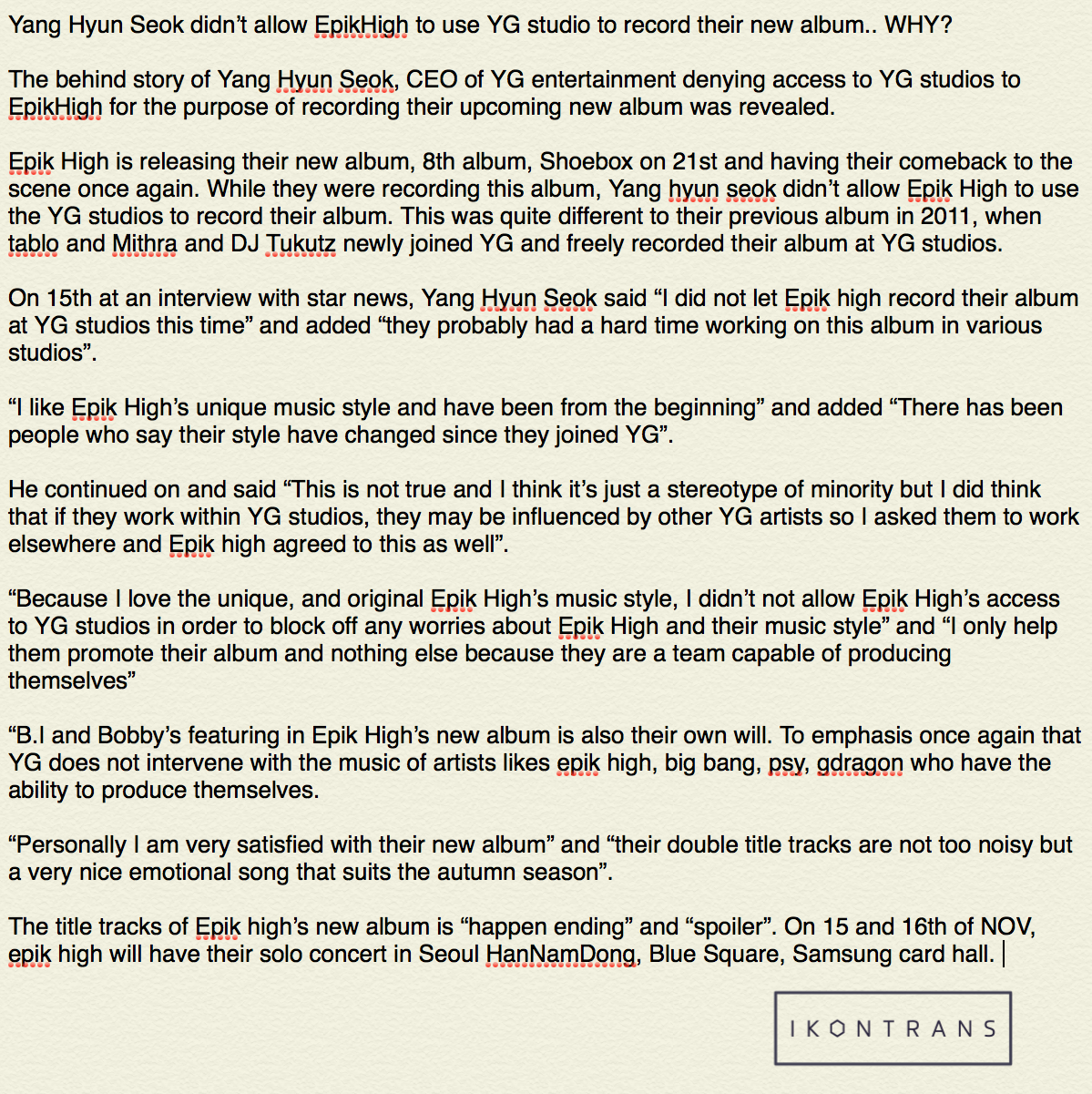 Why yes that is a Younha feature...

Matoki stuff, oh yaaaaay!!!
Looks cool but costs money otl but get money boys , I guess..
It's available in Android and Apple. If some of you guys do buy it, share a review of it :) 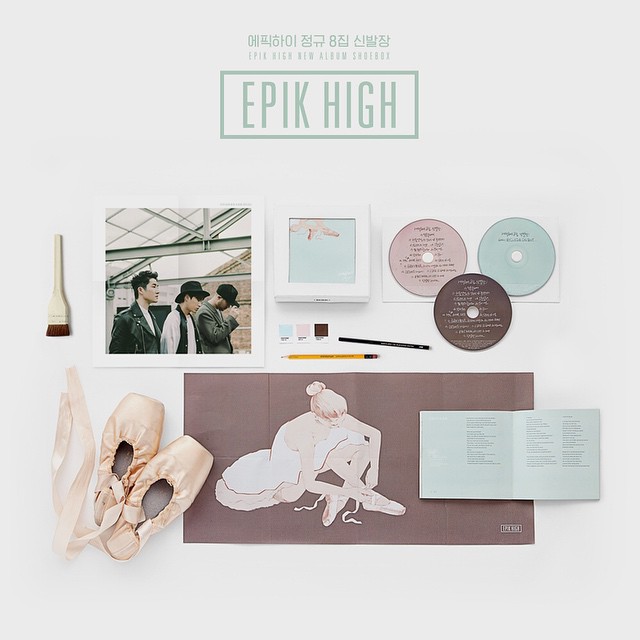 IT'S BEAUTIFUL YOU GUYS

Bonus track on the new editions of 'THE BEST': 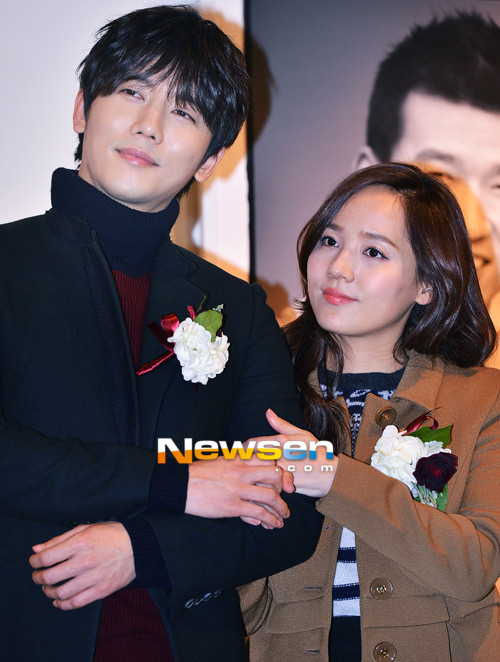 According to Eugene′s agency, Eugene is currently seven to eight weeks pregnant. As she′s in the early stages of her pregnancy, Eugene is focusing on taking care of her health. 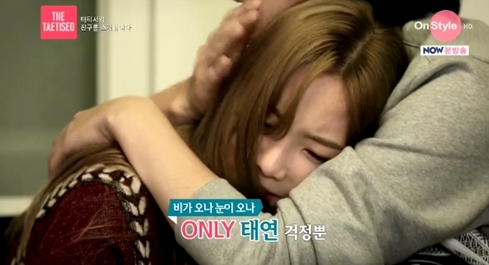 During October 14’s broadcast of On Style’s The TaeTiSeo, he touched Taeyeon’s heart by giving her a piece of advice. 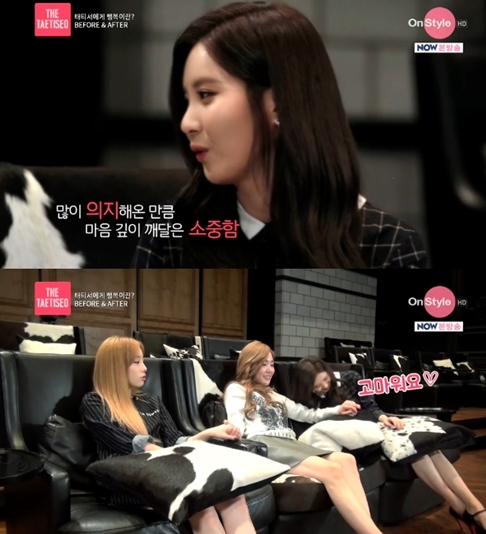 Girls’ Generation (SNSD)’s Seohyun expressed her gratitude towards the SNSD and Taetiseo members.

During October 14’s broadcast of On Style’s The TaeTiSeo, Seohyun expressed her gratitude towards the SNSD and Taetiseo members for spending the last ten years together, including her trainee days. 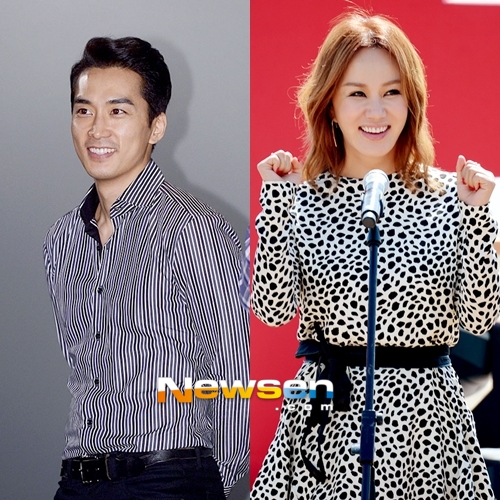 Song Seung Heon and Uhm Jung Hwa will be acting opposite each other in the film Wonderful Nightmare.

Wonderful Nightmare is about a successful lawyer who loses her life due to heaven’s mistake and is reborn as a housewife, who tries to go back to herself as a lawyer. Apart from Uhm Jung Hwa, who has been cast as the lawyer-turned-housewife, Song Seung Heon joined to take on the role of her husband and government official.

Five Korean indie bands will fly to Austin, Texas, in March to take to the stages of the South by SouthWest Music Festival, according to the state-run Korea Creative Content Agency.

The Barberettes, [su:m], EE, Asian Chairshot and Eastern Sidekick were handpicked by SXSW director James Minor during the Seoul International Music Fair, or MU:CON, hosted by the KOCCA from Oct. 6-8 in Itaewon, Seoul. 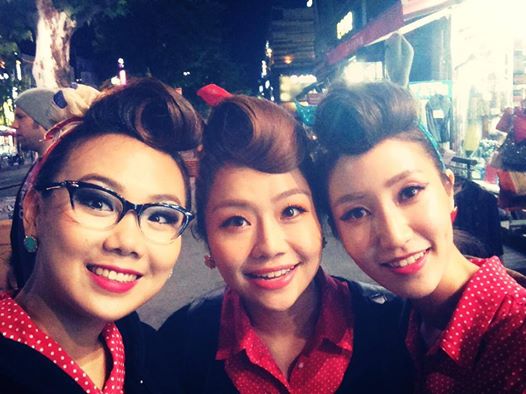 At the annual MU:CON, which brought in international music scouts from around the world, six more local acts won the chance to showcase their music at three other major music festivals ― France’s MIDEM, Singapore’s Music Matters and Canadian Music Week. They include IDIOTAPE and Glen Check, both invited to the Singaporean fair; Rock ‘n’ Roll Radio and Loro’s, both invited to the French festival.

Three renowned music producers, who participated in the Seoul event, also chose one team apiece to work with.

Rodaidh McDonald, a producer at the U.K.-based independent music label XL Recordings, chose local crossover band Jambinai and will produce the band’s digital single, the KOCCA said. Similarly, Tony Maserati who has worked with Beyonce and Usher will pair up with Sultan of the Disco, while Jimmy Douglass, famous for working with Snoop Dogg and Justin Timberlake, will work with the Solutions.

[INFO] Topp Dogg’s Comeback
Topp Dogg is scheduled to return by the end of october. They just finished filming the MV and are currently busy with all the preparations for the comeback
source: Cho PD's twitter + fytoppdogg

In related news, Evol recently had a showcase in Malaysia which is the first time all 5 girls have done anything together in a long time! They said that a comeback is in the works but nothing's concrete yet. I'm hoping it'll happen after TD's comeback and that the guys can FINALLY rest. 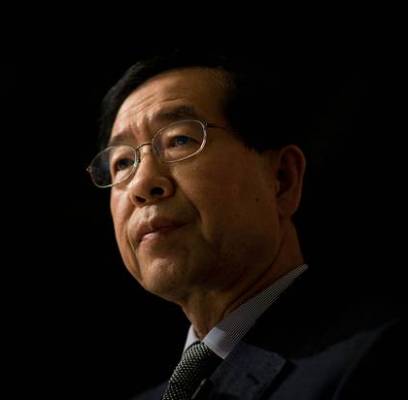 In an interview with Bay-Area daily the San Francisco Examiner, published on Sunday, Mr Park said that he hoped South Korea would become the first Asian nation to legalise same-sex marriage.

His stance on gay rights could invite controversy from the country’s social conservatives, yet he has been cited as a likely candidate for the 2016 presidential election. Coming out in support of gay rights is a rarity in South Korea, with a vast majority holding negative attitudes towards LGBT people, according to recent polls.

Mr Won-soon, who started his career as a human rights lawyer, said: “I personally agree with the rights of homosexuals. But the Protestant churches are very powerful in Korea. It isn’t easy for politicians.” A Seoul city spokeswoman confirmed the mayor’s comments to the Wall Street Journal, which were made in late September during a visit to San Francisco.

Politicians are under considerable pressure from religious groups that oppose gay rights. This year’s annual gay-pride parade in Seoul was met with protests by Christian groups, and the authorities of the district that hosted the event later announced that they opposed it.

Local think-tank Asan Institute for Policy Studies showed just 21.5 per cent said they had little or no objections to homosexuality, with a quarter saying they supported gay marriage.

However, due to an increase in mainstream media coverage, South Korea’s views towards homosexuality have improved in recent years, with an advance in the number of films and television shows that feature gay characters.

It's progress atleast, esp in such a conservative, family orientated society. Baby Steps. 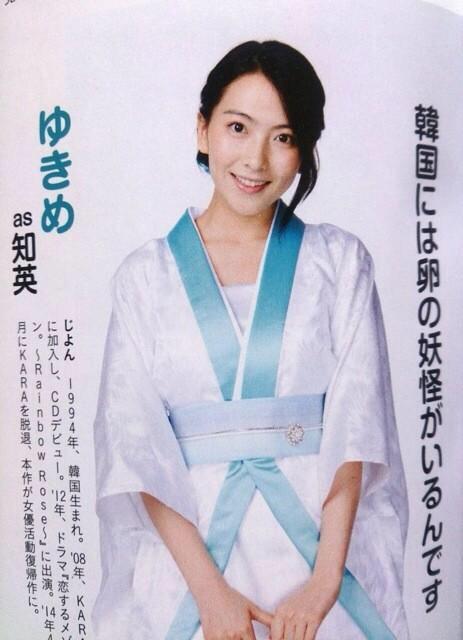 "If you look closely it's not a kimono but based off a chima jeogori. I wonder if they could cancel this drama"

i wondered if this could be posted here. if not, im sorry mods!

delta and iota never really stood out to me much, but they're definitely growing on me now. song was really nice and mellow.

still waiting on that pass out mv tho.

"No Make Up" feat Zion.T and HA: TFELT