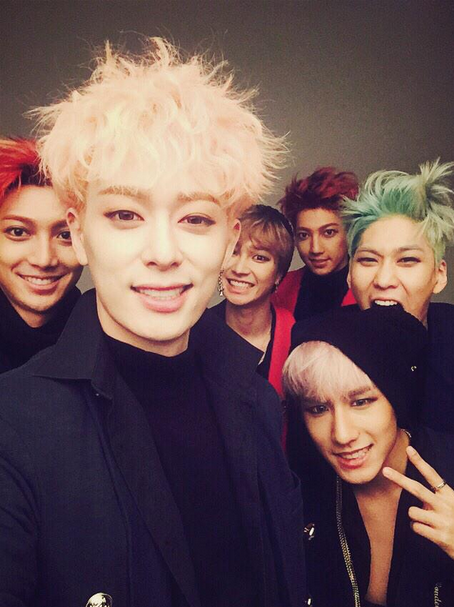 
I know there have to be Bestfriends on Omona somewhere right? Come out come out wherever you are! OP will keep making posts as long as necessary.

Revel in the utter perfection that is Kim XIA Junsu 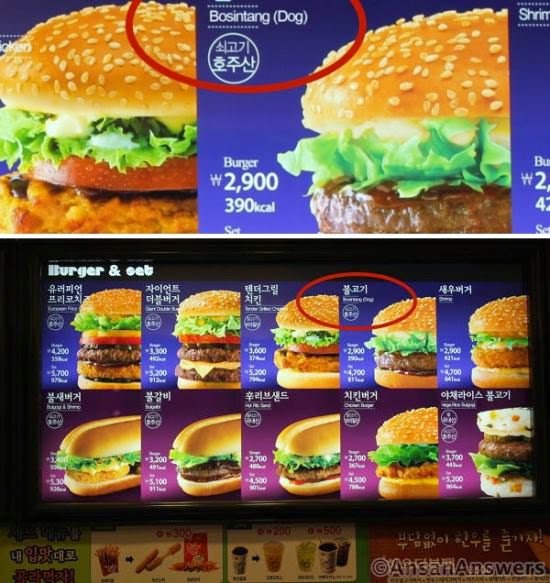 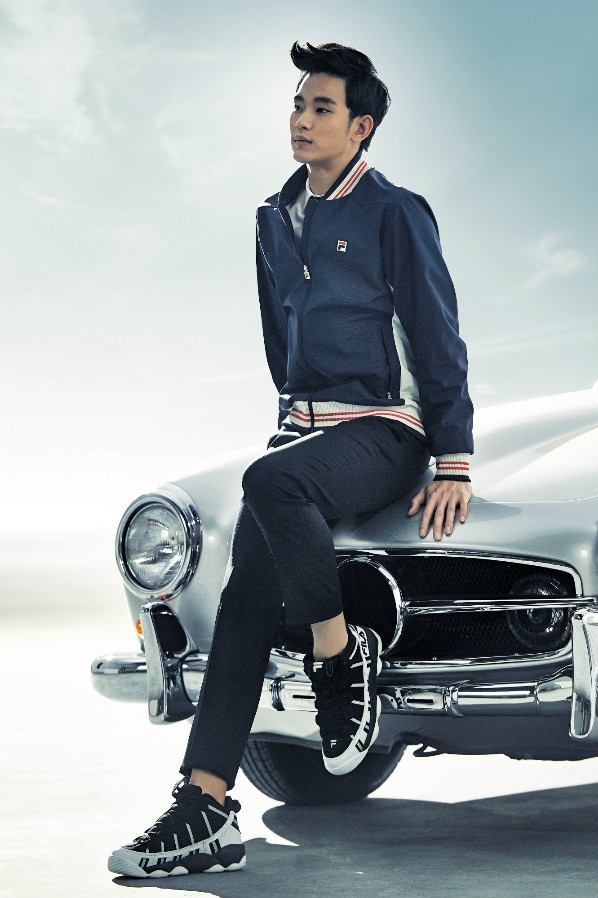 Kim Soo Hyun is making sportswear elegant in his latest CF for FILA Korea. In the new commercial showcasing FILA's Heritage collection, the handsome actor take casual chic to a new level as he sports his sneakers in a sleek high-end sports car.

[TAKE A LOOK @ THE VIDEO HERE] 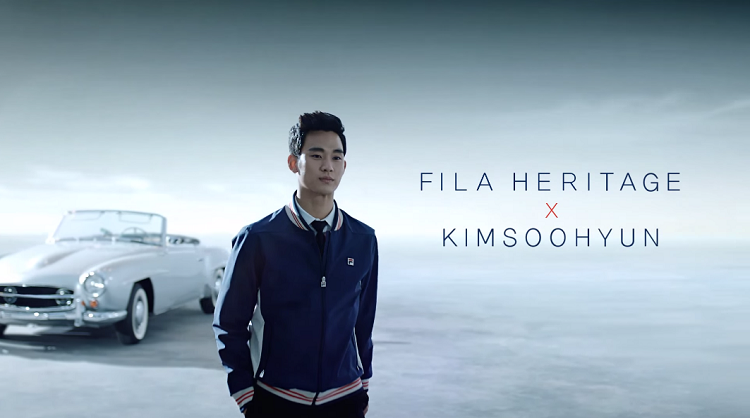 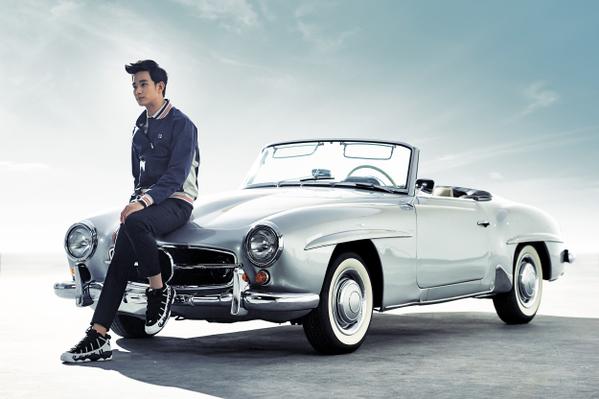 Bullying, abortion, suicide and the pressures of private education. The Private Investigators Club at the prestigious Seonam Girls’ High School tackle all of these tough challenges of their fellow classmates and try to solve the problems. The five members of the club – An Chae Yool (Jin Ji Hee), Lee Ye Hee (Hyeri), Yoon Mi Do (Kang Min Ah), Kim Ha Jae (Lee Min Ji) and Choi Sung Yoon (Stephanie Lee) – are tough, fearless and shrewd. But will some cases go beyond their capabilities? What will their teacher Ha Yeon Joon (Kim Min Jun) and principal (Hwang Seok Yeon) think of the girls’ amateur sleuthing activities? “Seonam Girls’ High School Investigators” is a 2014 South Korean drama series directed by Yeo Woon Hyeok. It is based on the 2013 novel “Seonamyeogo Tamjungdan: Banggwa Hooui Miseuteori” by Park Ha Ik.

If I have left out any triggers, PLEASE LET ME KNOW

if you saw the post about the lesbian kiss scene and want to just watch their eps, they're episode 11-12. i definitely thought this drama was just going to be lighthearted and funny but they've tackled so many topics i didn't think they would. i have so much respect for the producers/writers of this drama. ep 3-4 wrecked me, i cried so much. EPISODE 11 AND 12 OMG i identified with it so much. this story was so incredibly important and it was done well.[spoiler]
INTENSE LESBIAN KISS I WAS NOT EXPECTING IT TO BE INTENSE. i thought it would be like a peck or the usual awkward korean drama kisses


[debating whether to watch this? click for some gifs! (spoiler!)] 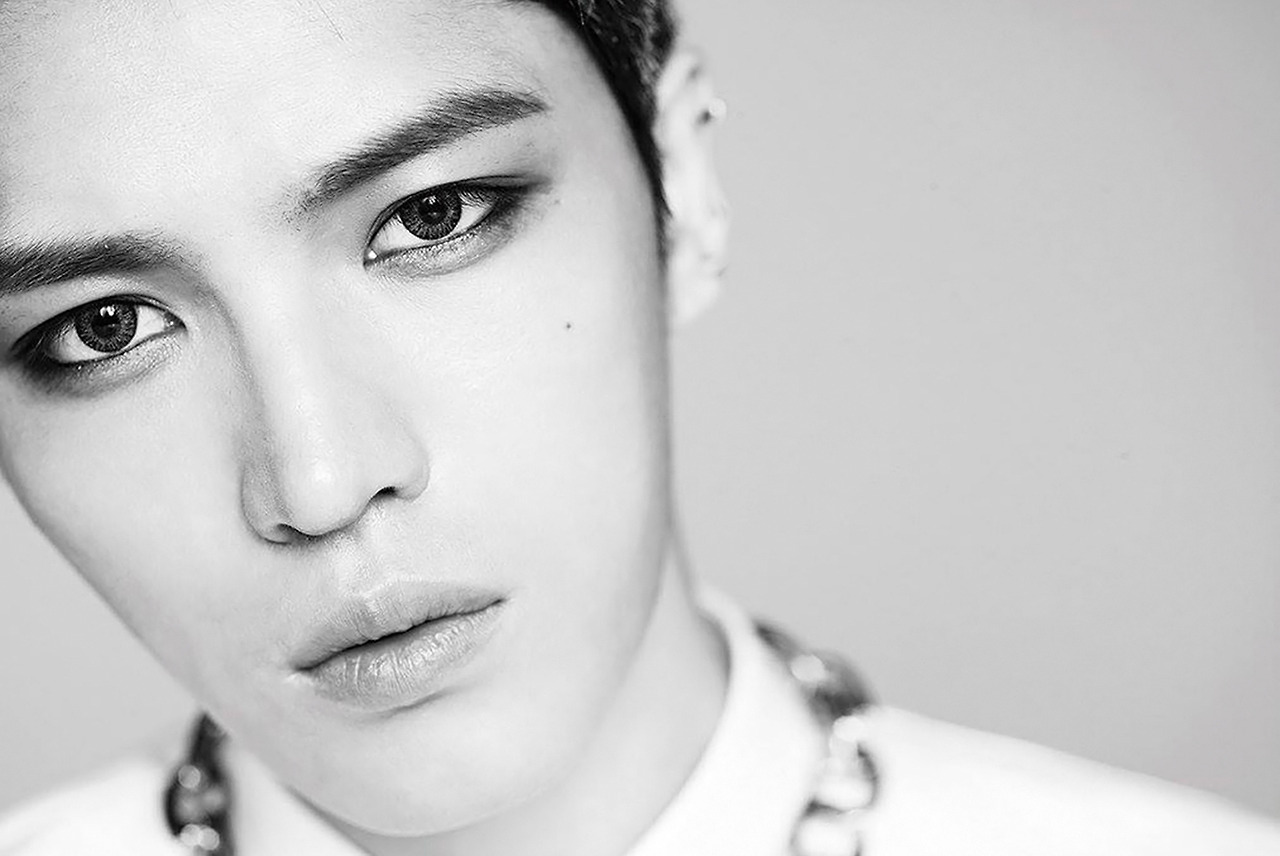 JYJ’s Kim Jaejoong shared his thoughts on the impending enlistment weeks and how he will use the remaining time.

The singer and actor, who just wrapped up the KBS 2TV mini series “Spy” yesterday, stated on an interview with Star News, “I want to create good memories before I enlist. There isn’t much time left and I think fans would be the ones most regretful. This is why with the remaining time left, I am going to meet and make time for them. My plan is to give time to my fans who have given me so much support and love.”

Kim Jaejoong shocked his fans when the specific date of his enlistment was announced. He gave a message to his fans through the same interview saying, “I will return healthily, and [fans] should not worry too much. I am very thankful to all of you for giving me so much support and love.”

Kim Jaejoong will be entering the military on March 31.

The song is called Promise, Chen wrote the lyrics, Yixing composed the song and Chanyeol wrote the rap.

Sometimes, I close my eyes and fall into the thought of you
You habitually imagine of that familiar image of me
Despite my clumsiness, you still like me no matter what
But do I deserve to be loved by you?

You who have always been waiting for me
You who embrace me with your arms
I won't forget
I will make you happy
like the 'we are one' word I've told you.

Although time passes, there is a word I cannot express,
sinking down in my heart.
'I'm sorry' 'I love you'
asking you to believe in me like this time
I will hug you and hold your hands
If I am able to express my heart,
I will devote myself to you.

I want to protect you
whenever

'Things will be better or it will be forgotten as time passes'
Since those consoling words might not be able to conform you, I feel uneasy again.
Don't go. I wanna hold you back.
I know that it is difficult to keep believing in me since the promise was broken once.
However, I wanna stay with you forever, living and sharing breath.
I wish we were happy like that in the beginning.
Thank you, I'm so sorry, love you.
Even if I have given my all to you, it's not gonna be enough love
I'll protect you all my life.
yeah it's okay to just follow me.

You who always wait for me
Go straight on, thankful 'you'

I will never forget.
I will make you happy
like the 'we are one' word I've told you.

Although it might be hard and tiring,
I will go up on the stage again
once again, I will encourage myself to do it.
For you who have been waiting for me,
I will hug you and hold your hands.
If I am able to express my heart,
I will devote myself to you.

Those joyous days
My birthday's stage, I spent with you.

When your heart feels terribly hurt, I will definitely embrace you.
Although time passes, there is a word I cannot express,
sinking down in my heart.
'I'm sorry' 'I love you'
asking you to believe in me like this time
I will hug you and hold your hands.
If we can stay together endlessly,
I will devote myself to you.

The last day of March, 2012.
For us, spring was still far away and
as if mocking us, a fierce winter wind kept howling
but that heart-warming day,
the moment we first me you guys remains unforgettable.

Greeting in sync by shouting out
our first slogan 'WE ARE ONE!' at the top of our voices
was not even an easy task,
when standing in front of cameras, why we would all turn into a blank paper...
it was nothing but a complaint of clumsiness.
However, again, we would like to say thank you to you guys
who still enjoyed and adored those poor images of us

We had promised you.
All the loves we received, in order to return them to you and
make you all happy,
we had done self-reflection and achieved many wonderful things.
It was possible because of you guys.

We were blissful as, in fact, we are one.
However, hardship had hit us faster beyond our expectation.
It was such a chaos and it brought us to tears.
Also, we were upset.

Anyway, our hearts were torn because of
you who were getting hurt than anybody else.
But it is not going to hurt anyone again.
Getting hurt is natural,
it is only to make us become stronger.

Today, at this very moment, we'll again promise you.
To return all the loves we obtained from you, until that moment,
we will move forward and stay together and
put our passion and talents for you guys,
who has always been believing and waiting for us.
Like this very moment, to let us see all of you,
please stay by our sides and remain in that position as always.
EXO-L, thank you. We love you.
WE ARE ONE!

Turn on the cap 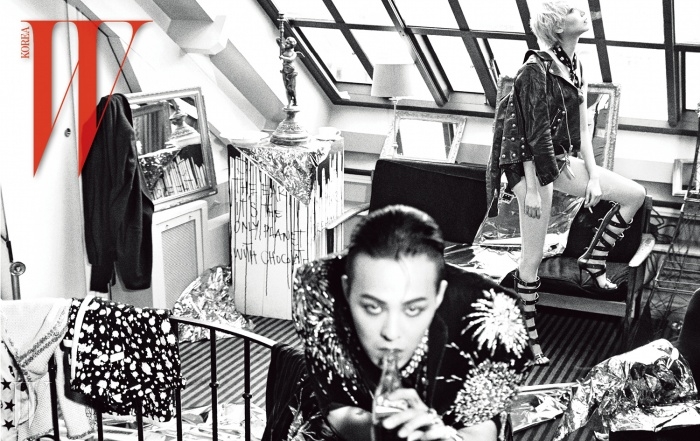 Fashion magazine, W Korea unveiled its dark but attention-grabbing photoshoot with a wide range of artists.

The black and white pictorial, titled ′Their Secret Afternoon: Nutthin′ But A ′G′ Thang,′ was unveiled to celebrate the magazine′s 10th anniversary. 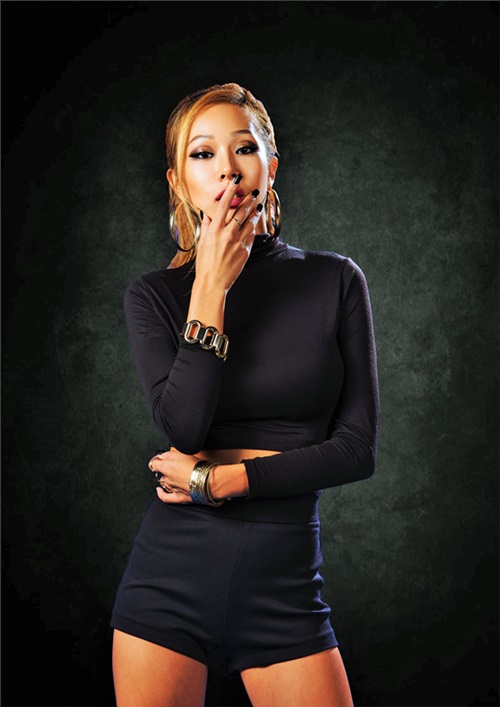 Jessi confessed that she struggled with Korean culture as a Korean American.

Currently appearing on Mnet’s Unpretty Rapstar, Lucky J’s Jessi spoke honestly about what she struggled with during her life in Korea during an interview with Newsen. 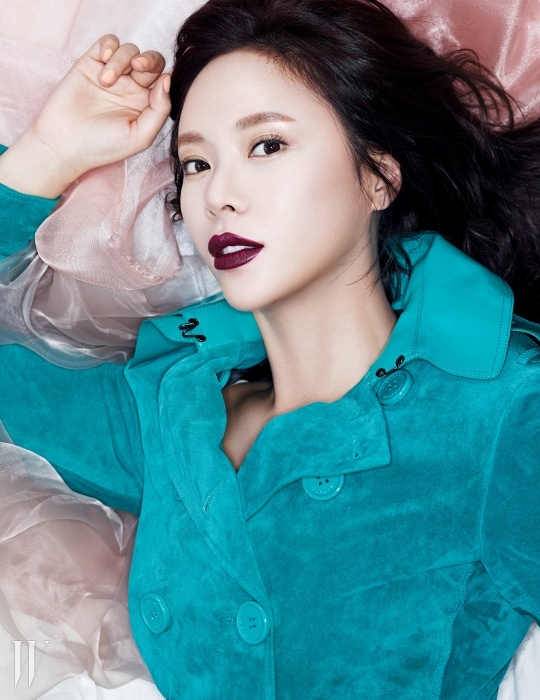 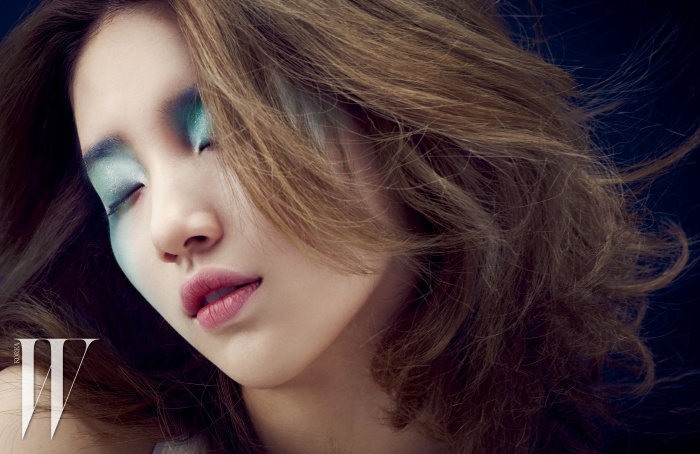 [OP&apos;s Favorite Busanian Makes The Most Of His Days Off In Tokyo]

RT @0430yes Dear Changdae-hyung^^ @changddaiworld For the never-changing heart... I am thankful again and again https://t.co/QyDhUyl2PS


{Note, he changed the caption to 'Thanks My Love' on IG afterwards. Don't ask OP questions OP does not know how to answer... But he looks happy, so OP is happy.}


I never thought I would ever adore this kid as much as I do. He looked so ecstatic in that IG video, it kills me a little bit. He's off to Osaka in a few days to finish off his showcase run. Have you listened to his album? If not, check it here!

I want to play with them. I mean, I would totally give up my perfectly good career to become their nanny. Il Gook-ssi, check my reference, please! 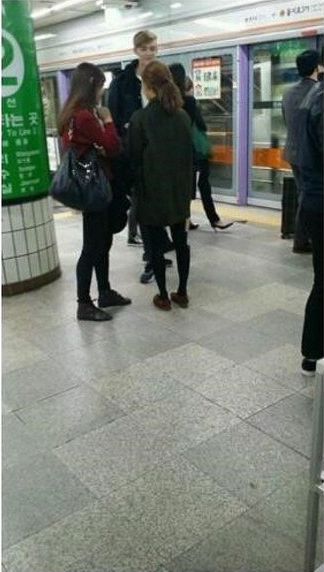 Article talks about how Korean men responded to the picture above with comments like, "I've always heard of Korean women going crazy for white men but I didn't think it'd actually happen", "It's because Korean women act so cheap like that that white men think easy of them", and "I saw posts going around by white men making fun of Korean women and I can see why now"


...so, interracial relationships are a big no-no in Korea, i'm guessing?

Girl group f(x)‘s Amber confesses her feelings about the prejudice she faces because of her style.

On the March 6 episode of MBC‘s “I Live Alone,” Amber, who is recently gaining attention for her amazing work on the variety show “Real Men,” appears as a guest.

The singer confesses that “I look strong [on the outside], but I get hurt easily,” speaking about the prejudices she faces because of her boyish style.

Amber adds, “I’m a girl, aren’t I? But people get surprised when I go to the bathroom. They say, ‘I think you’ve come into the wrong place.’ I really understand their mistake, but honestly, I can’t help but feel hurt and I don’t like it.”

She also says, “What I wish is for people to say it nicely. People tend to say it in an attacking manner.”

[netizens comments]
1. [+6,090, -279] I really hate it when elders won't think twice about asking boyish girls if they have a penis because they look so masculine... Age doesn't grant you the right to do whatever you want, so many elders don't think before they speak.

5. [+463, -19] In a world where everyone gets plastic surgery to look like one another, I like it that Amber has a unique style of her own

6. [+415, -38] What's wrong with a woman who dresses masculine;; I find it great that Amber can express her own style like that

9. [+202, -51] Americans prefer strong women. Sure being sexy is important and all but you have to be sexy and strong. If you act like women do in Korea with the baby act and aegyo and high pitched nasally voices, you'll be treated like a psycho over there. You'll never see American women do all that nasally aegyo like Korean women do. 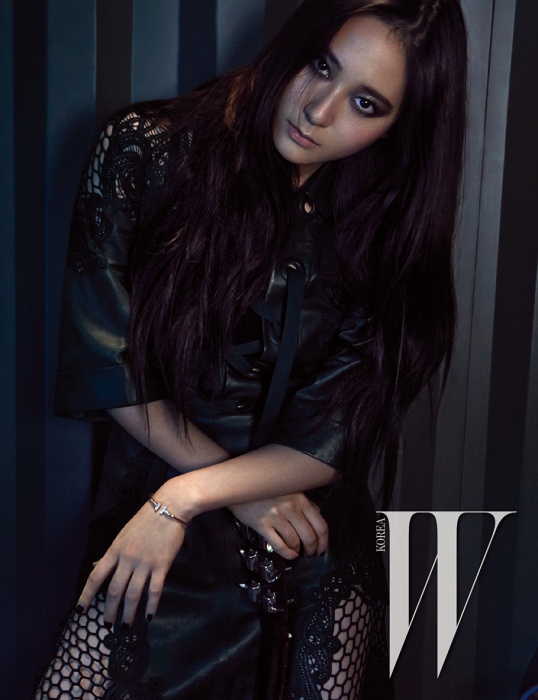