Former members of Wonder Girls Sunye and Sohee have showed their continued love and support for their group by dropping by “Music Core” to see them perform their comeback stage!

Prior to Wonder Girls’ comeback earlier this month, JYP Entertainment announced that Sunye and Sohee had officially withdrawn from the band. Sunye is said to be focusing more on her family, while Sohee will be working on other projects. Nevertheless, both the former members have been incredibly supportive of the group during their comeback. Member Yeeun recently said on “Yoo Hee Yeol’s Sketchbook” that Sunye had even come to the music video filming for “I Feel You” with her daughter.

Real Hoya
This is his own yt channel

Four new tracks. ;_; I can't wait 'till the 16th, but I gotta say, so far Devil sounds better than this. Also, I can't believe there's just a month left until Donghae enlists. OP is crying.

Here is iKON's pre-debut warm up single! Their debut mini album and double title track release will be on October 2nd.

(What are groups calling the ballads and pop songs they release prior to debut?)

By Kim Se-jeong for The Korea Times

Almost 5,000 female employees have been fired every year while on maternity or childcare leave since 2010, data showed Sunday.

According to the data submitted by the Ministry of Employment and Labor to Rep. Min Hyun-joo of the ruling Saenuri Party, 26,755 women lost their jobs while on leave for childbirth or childcare between 2010 and June this year.

The related law guarantees 90-day leave for childbirth, and up to one-year leave for childcare. Under the law, it is illegal to fire employees who are on such leave except for very limited cases such as a company closing down. [ Read more... ]

"This striking number is an example of how poor Korea's corporate culture is in terms of promoting balance between family life and career," Min said. "The government should come up with solutions so that this does not continue to happen."

Of them, more than 9,700 were fired due to firms' financial troubles. Some 1,700 lost their job because companies' relocated or changed their working conditions.

About 15,300 were dismissed because of "other reasons," which the companies did not specify.

"This contradicts the government policy to help female workers keep working through various measures for childbirth and childcare," Min said.

Helping workers attain a balance between work and family life has been the top priority for the Ministry of Gender Equality and Family. This is part of measures to fight the nation's falling birthrate.

More women now return to work after having babies but many settle with one baby because of the poor environment for raising children and maintaining a career at the same time. This also pushes many single women to not marry or postpone tying the knot.

Free childcare to be limited for housewives

By Chung Hyun-chae for The Korea Times

The government is moving to limit the time non-working mothers can use daycare centers.

But the move has prompted a backlash from the mothers, who claim it is discriminatory.
The Ministry of Health and Welfare said Saturday that it plans to create tailored programs for both working and stay-at-home mothers.

According to the plan, non-working mothers can leave their children aged four or under at daycare centers for free for up to seven hours a day.

If they want to use the centers for longer, they will have to pay for the additional time.

Currently, children of either working or stay-at-home mothers can be left for up to 12 hours a day for free. [ Read more... ]

The ministry reflected this in its 2016 budget plan, and aims to implement it in July next year.

"We came up with the measure in order to improve the current free childcare program," a ministry official said.

If the new system is implemented, children who go to a daycare center at 9 a.m. should be picked up at 4 p.m.

"Given that non-working mothers' children stay at daycare centers for six hours and 56 minutes on average, the new policy should not cause a lot of inconvenience and trouble to them," the official said.

Exceptions will be made for families with three or more children, single-parent families and families with a disabled member. Housewives who are pregnant or are looking for jobs also can leave their children up to 12 hours as before.

Government officials say the time limit is necessary because many non-working mothers who do not need childcare service leave their children at the centers because it is free. They say the number of such hiked after the government provided free childcare programs.

However, the plan has sparked a backlash.

"The government discriminates against stay-at-home mothers," an Internet user wrote on the nation's largest online childrearing community. "Maybe it would have been better if I hadn't had a child but had focused only on my career. They treat non-working mothers as idlers who just spend time chatting at cafes."

"I don't know how to prove that I am working as a freelancer," another user said on the same community.

There is also a concern for loopholes as some housewives pretend to be working mothers.

"I know a mother who does not work actually but obtained a certificate of employment from the company her husband runs," a working mother, surnamed Kim, said. "There may be many such people. I wonder how the government can sort them out."

Countering the worries, the ministry vowed to detect such people, but did not say how.

The ministry also explained that the new policy would save 40 billion won from the childcare budget, and it would spend the money on better treatment to caregivers and improving the quality of child care services. 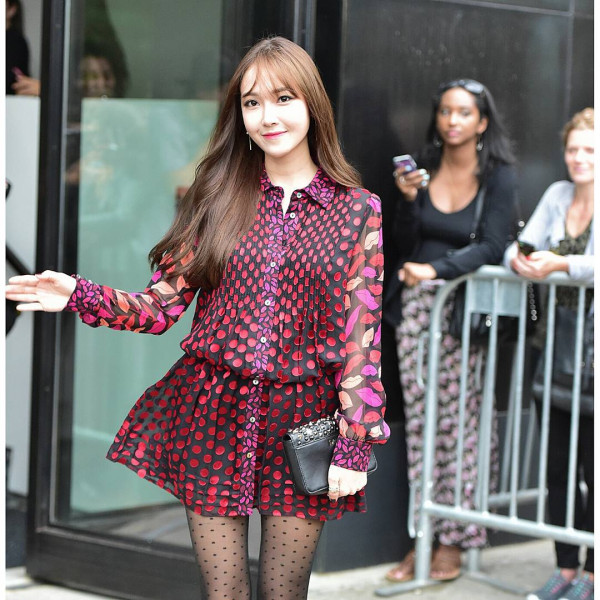 The audio is not very good, but it's an interesting interview! 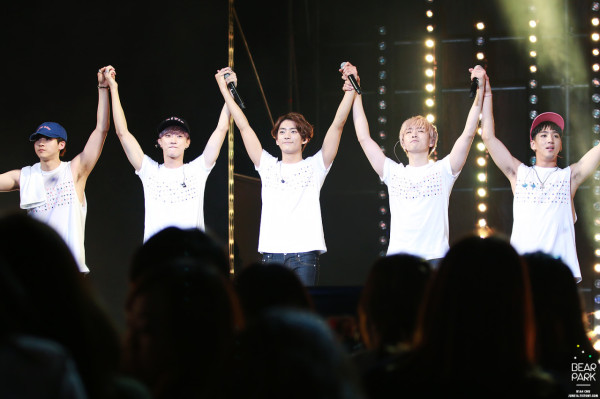 (c)
Last week B1A4 finished 'Sweet girl' promotions with an special concert, this journalist wants to encourage you to root for them in their next comeback
( Collapse ) 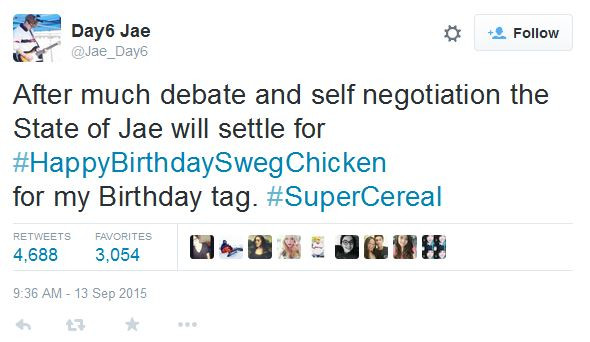 Park Jaehyung from Day6 celebrated his 23rd birthday on September 15th (it's already his birthday in Korea, though there's still a day left over here.)

Happy birthday to the oldest chicken!

[JIN] Everyone it’s lunch
time did you eat lunch yet 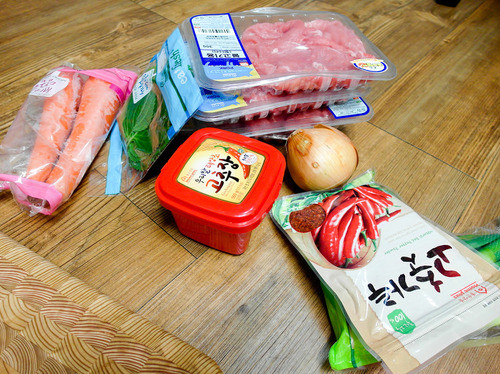 He has a ton more
recipes that he does for the guys and they all look hella good even though I
don't really fuck with red meat like that. I might do this every so often. He
should probably put out a cookbook at this point.

They had so much fun omg, Yeri is the cutest and Irene is hilarious. SoshiVelvet gives OP life!

GOT7 COMING BACK <MAD> #GOT7 #MAD pic.twitter.com/LIAzaZ4vPK 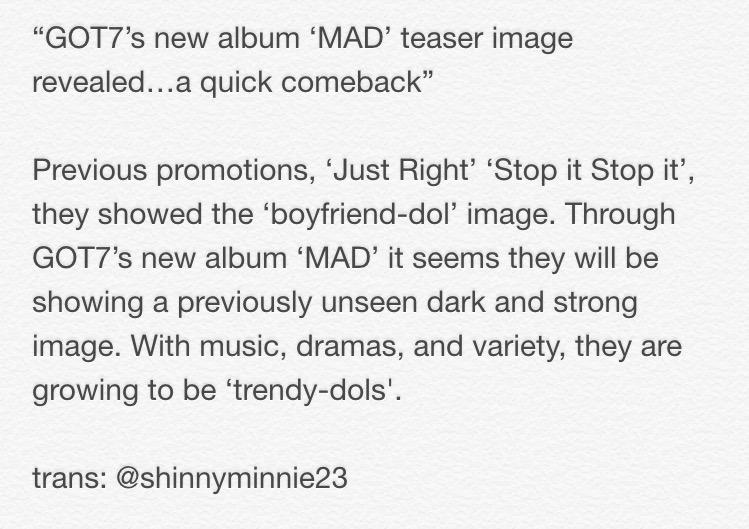 (it's in quotations because it's not an actual comeback.) 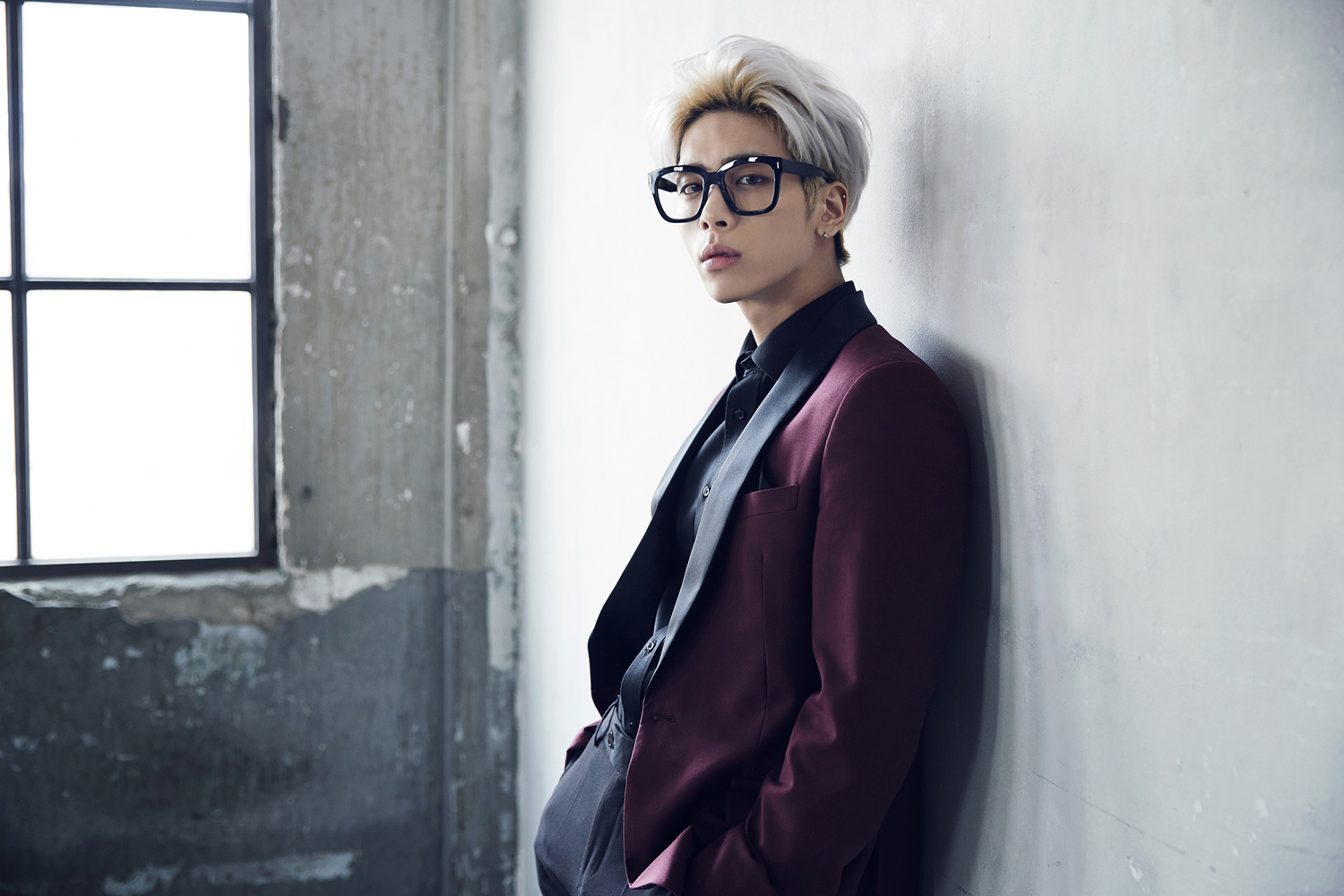 a quick round up of newly released information on the release of jonghyun's upcoming album, the collection [story. op. 1], translated by yours truly. the title track of the album has been confirmed to be "루의 끝 (the end of a day)" which was featured in the first teaser released for the "comeback" (that confirmed the mysterious teaser released on the 13th being for jonghyun) and the newer teaser which can be found below. the song was previously released for jonghyun's composition corner on blue night radio, "the man who composes", in november of last year. there will be a total of nine tracks on the album, which will be released digitally at midnight kst on september 17th and physically on the 18th. all of the songs, minus one that is said to be new, were also revealed in the past on blue night. jonghyun composed and wrote every song on the album (some with the help of his composition group / high school friends, wefreaky).

jonghyun will be "revealing" the title track for the first time outside of the radio show to the public via a live stream on naver's v application on september 16th at 10pm kst. during the broadcast he will also showcase other songs from the album and talk about each, the album creation process, ect.

Taeyeon and Baekhyun broke up.

Multiple assosicates in the industry have noted that "Tayeon of Girls' Generation and Baekhyun of EXO have recently ended their relationship. The two grew distant quite naturally with their busy schedule."

Additionally they mentioned, "Taeyeon has expressed her affection for Baekhyun, even secretly attending the EXO concert in Seoul in March, but was not able to break down the wall of busy schedule. The two have broken up and have decided to remain good colleagues in their mutual agency."

so is exo making a come back?

Update:
SM's stance is that they're checking the validity of the news, meaning they're trying to figure out what time of day to admit it I guess.
Collapse