There's no reason to this post, just an appreciation for God's fine creations.
Source: JYPE IG

It seems iKON is going to stay with a mid-tempo song and a low key music video for at least one of their title tracks. YG really wants to be IG famous though...use You Tube man.

Update: "iKON will be releasing six new songs on October 1, and they have already made the MVs for two of them. The two MVs are for the powerful hiphop title song and the other for this melancholy hip-hop song."

Donghyuk's side-eye and Jinhwan saying, "Oppa" was hilarious. Make sure you have CC turned on.

Please use this one mods! So cute. So adorable. And he had his first of two nights Seoulo concert today. A lot of the JYPN artists attended, as well as Kim Woobin and Kang Haneul!


Younghyun and Sungjin were clearly in very good moods today... and Junhyeok's voice just kills me, it's so clear and sweet. 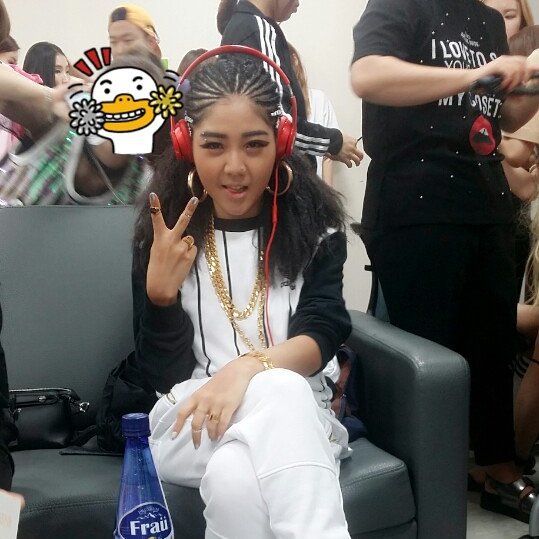 Truedy, a contestant on Mnet's survival show, 'Unpretty Rapstar', has been recently getting attention for apparently being mixed as she mentions about being "the first black people" in Korea through her lyrics: "This is Truedy flow feel ma voice / Check ma soul I’m from Seoul, can you believe it? Seoul City soul / The first black people in Korea / I’ve never been under but I’ve been to the real bottom / I came up here without anyone, all by myself".

A fan called her out on instagram, telling her that if she isn't mixed, she shouldn't act like she is because being black is not a costume:

what are your thoughts abt it, omona?


The interviewer could not stop fanboying so it was cute! It was weird that she never mentioned bom when talking about the girls, but I assume shes not supposed to =/

They were so nervous, haha. I wonder if Congratulations is really Younghyun's story or if he just didn't know what to say. Glad that they're getting good reviews tho! Also, thanks to the subbers for getting it out so quickly!

13 contestants with a special talent or skill compete against each other in games where 1 person is eliminated in each episode.

Guys, did you enjoy this season and the finale? Did the right guy win? What's your favourite season out of all four?


Mark getting attacked by bees

Mark is too photogenic like pls dial it back a little. Mods, sorry for all these source links OTL

ETA: Apparently Jackson was injured during filming and taken to the hospital; no word yet on the nature/extent of his injury. (Source: fuckyeah-gotseven)

source: pann via kpopkfans, smtown
mmm vocally shinee would be #1 imo even though i like big bang's music more (in general)