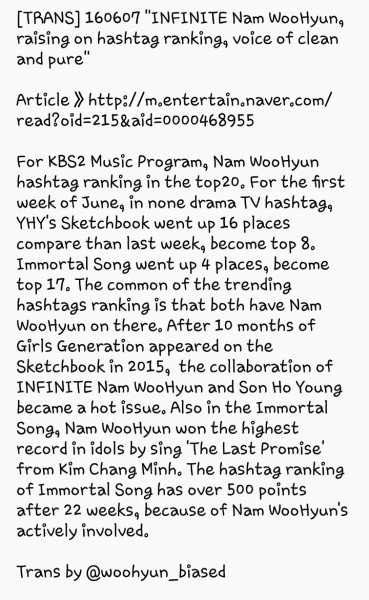 Top comments in the article:

[Talks about the finger heart]

During the interview, MC Yoo Hee Yeol asks Woohyun, “I heard that you’re the creator of the finger heart; is that true?”

“I’m not quite the creator,” Woohyun responds, “It already existed, but I popularized it when I used it in around 2011 or 2012. I’m sure someone used it before then,” he says.

Yoo Hee Yeol asks, “Then what heart did you use before that?”

Woohyun responds with a series of hearts made with his arms, hands, and finishes off with finger hearts.

OKAY SO woohyun's being the finger heart guy was the 3rd most read story on naver today LOL man made it pic.twitter.com/E7kMXsNm9K

[Be Mine and One Candle with G.O.D Son Ho Young on Sketchbook]


[Edited out story on Sketchbook]

TBH IT'S TOO GOOD TO BE EDITED LOL pic.twitter.com/Wucp69u5fI

He rapped on Sketchbook with G.O.D's Son Ho Young lol 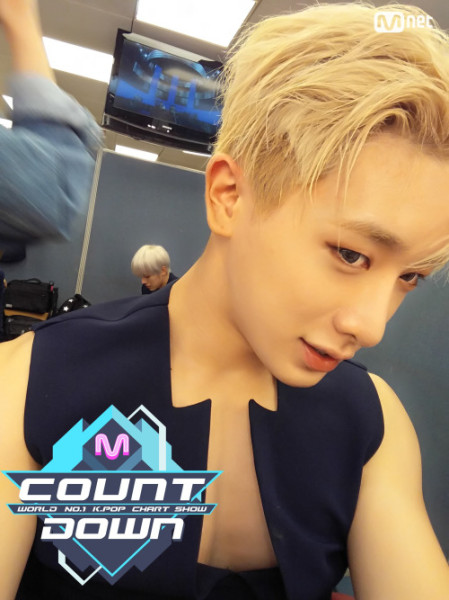 So Monbebes are always out and alert for what Monsta X has to offer us, beside their beautiful selves and talents, and recently fans have discovered "things" about Wonho you DO NOT want to miss.

[YOU HAVE TO SEE THIS YOU WONhonT BELIEVE YOUR EYES BUT ITS REAL]HE HAS THREE TATTOOS, on his right foot, his left thigh and on hIS RIGHT ASS CHEEK!!! 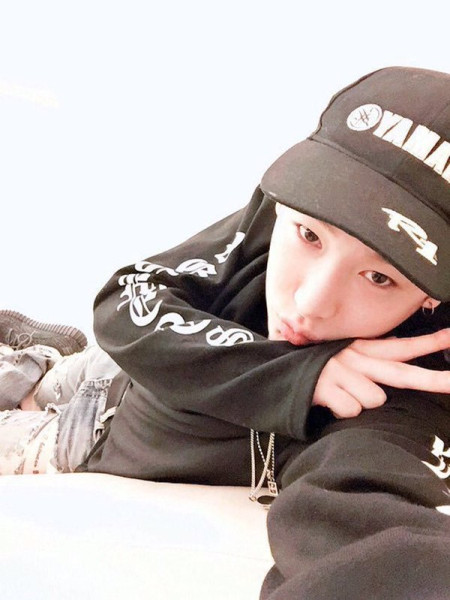 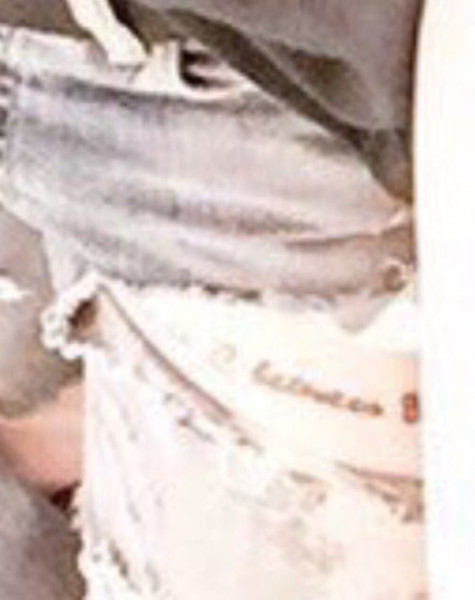 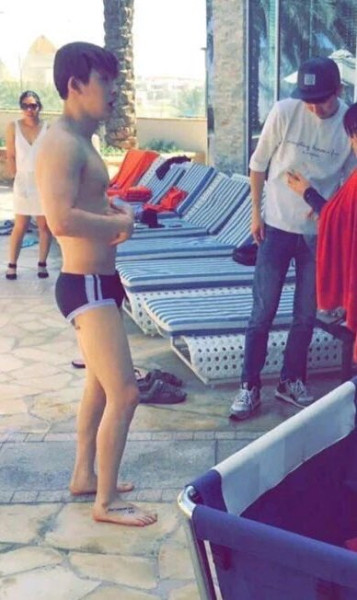 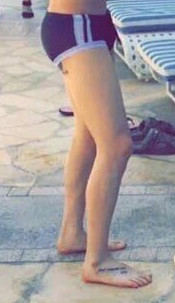 We all might have seen this gif going around with a comment saying that Wonho has gotten his nipples pierced:

and I have come to the conclusion that he does indeed got his titty pierced.

Now I know a couple of people may say that it might just be that his nipple is hard because the boy has a history of hard nips: 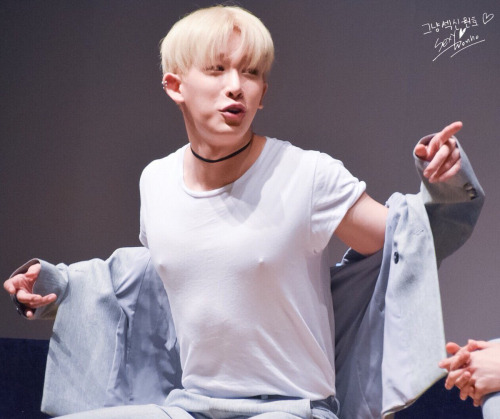 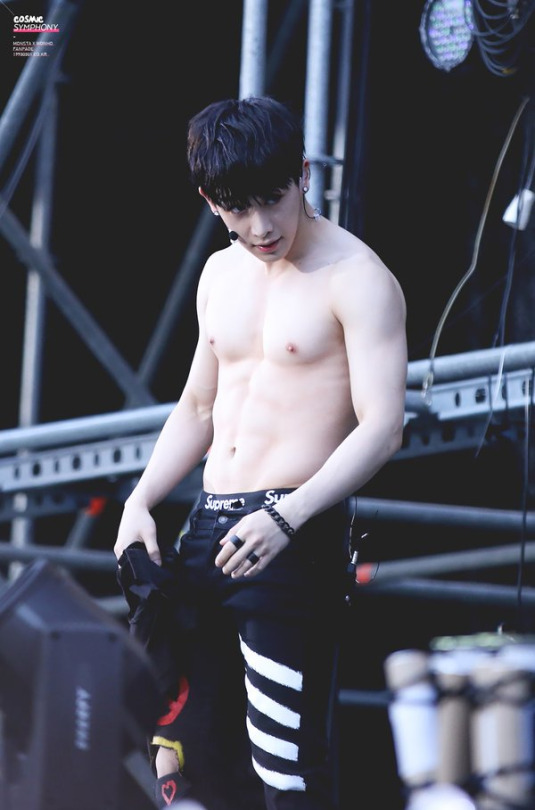 BUT! what made me further believe he has only ONE nip pierced is at the fan sign where he was bringing hyungwon in for a hug:

Note the amount of care and distance he has hugging him. It’s a little awkward isn’t it? Usually with new piercings you need the to have a lil bit of air to breathe and it usually stings if you touch it when it’s freshly pierced. 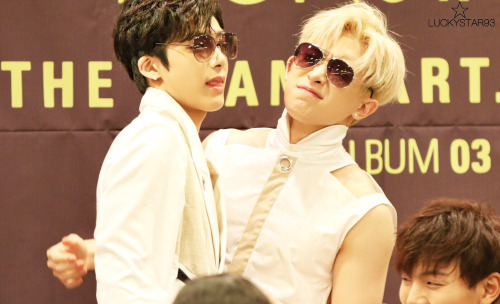 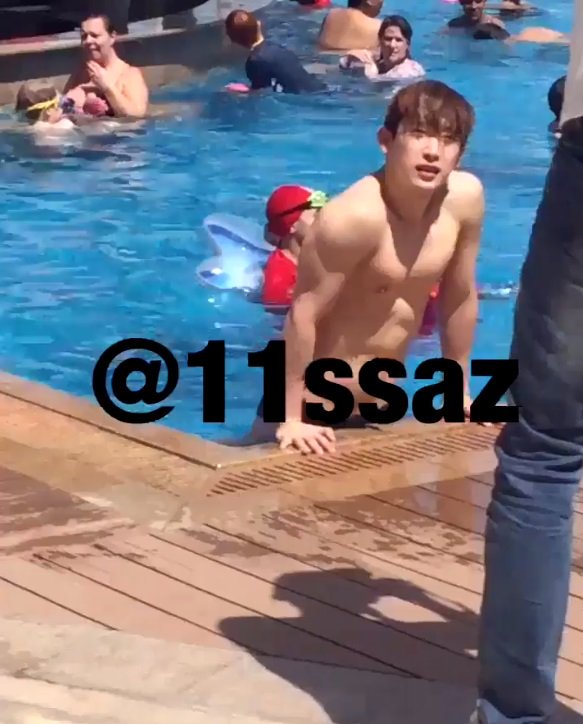 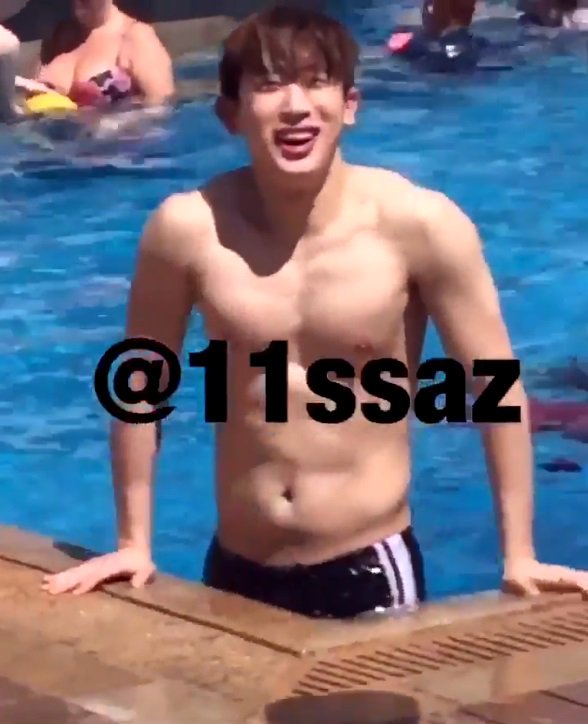 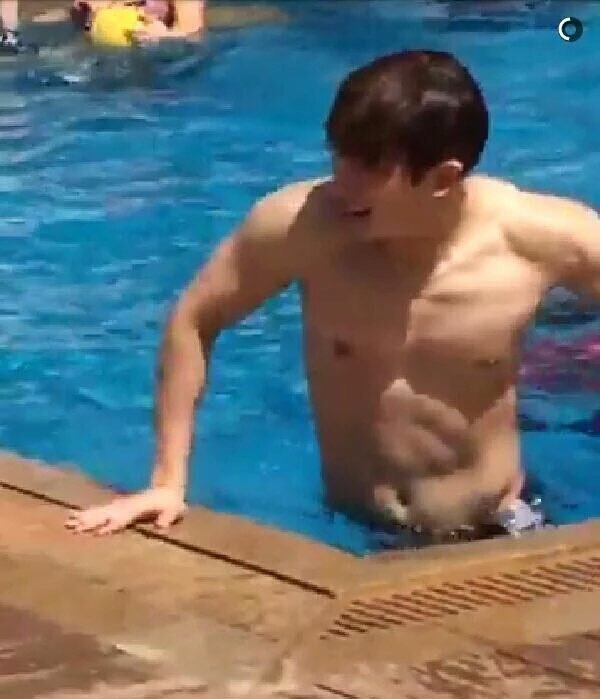 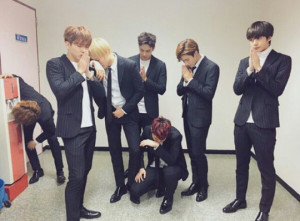 This was kind of interesting so I'm posting it.

Ever felt a bit curious about what Korean hip hop fans were saying about your fave idol rappers?

This article is translated from Nate. The OP states that they gathered opinions from hip hop communities since it would be more objective than collecting opinions from Nate (fangirl opinions<). They compiled a list of some common sentiments that pop up when discussing different rappers.


Shade or praise, which does your fave receive? 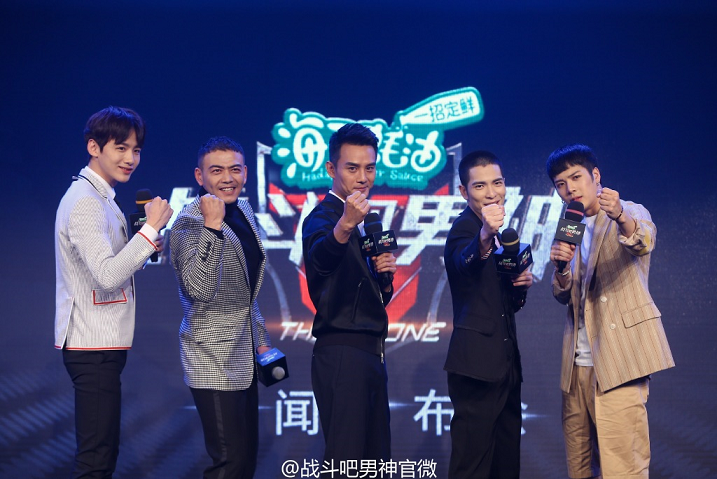 The member is named Lisa and is 19 years old. She has been revealed to have trained for five years at YG. While being Thai she can also speak Korean, English, and Japanese. Furthermore, she’s described as having great dance skills and was a part of a dance crew before. 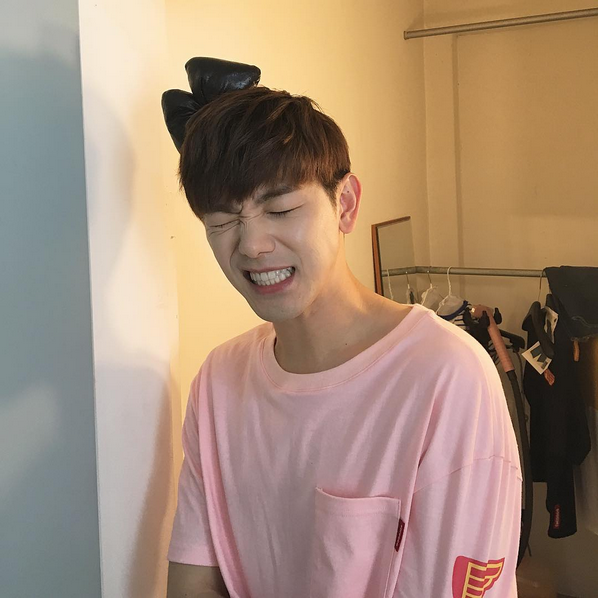 Him & Solar should have a couple photoshoot 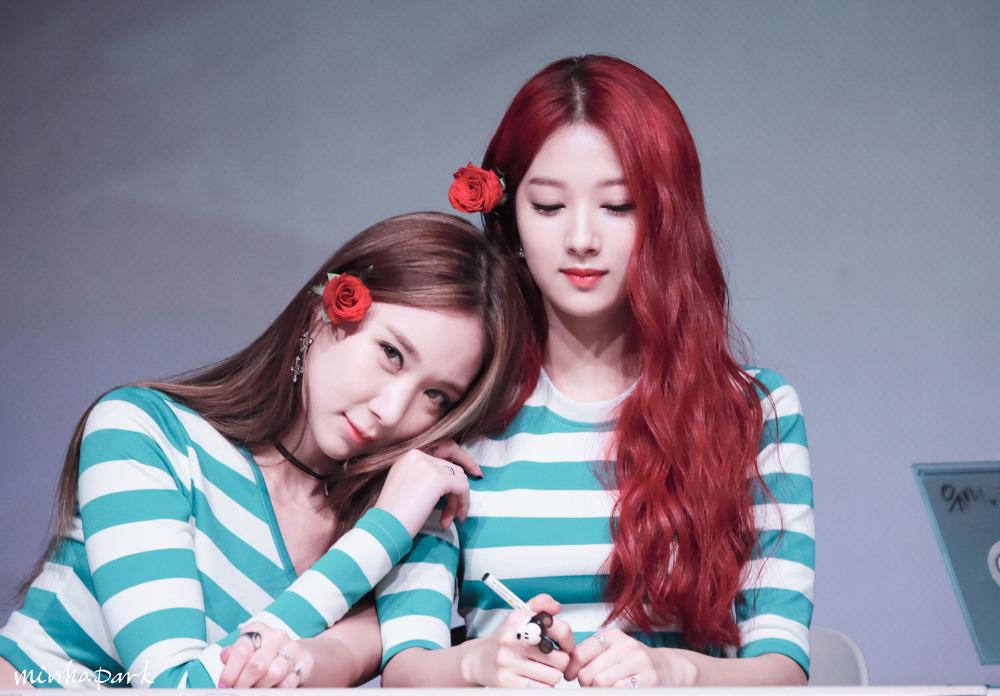 Star Empire has revealed that 9MUSES members Euaerin and Minha have graduated from the group. Furthermore, the group will be engaging in unit group promotions this summer. The members and number of members for the unit groups have yet to be revealed.

“Hello. This is Star Empire.

“We would like to inform you about the reports regarding Euaerin (birth name Lee Hye Min) and Minha (Park Minha).

“9MUSES members Euaerin and Minha’s exclusive contracts have expired and they decided to graduate from 9MUSES.

“This was not an easy decision for them and the other 9MUSES members. However, we respect their decisions as they have promoted under 9MUSES for seven years and we understand their situations.

“We wish the best for Euaerin and Minha who are graduating and starting a new path.

“9MUSES is preparing for a summer comeback through unit group promotions and we will inform you of the unit group details soon.

“We will do our best for the fans who always love and support 9MUSES. Thank you.” 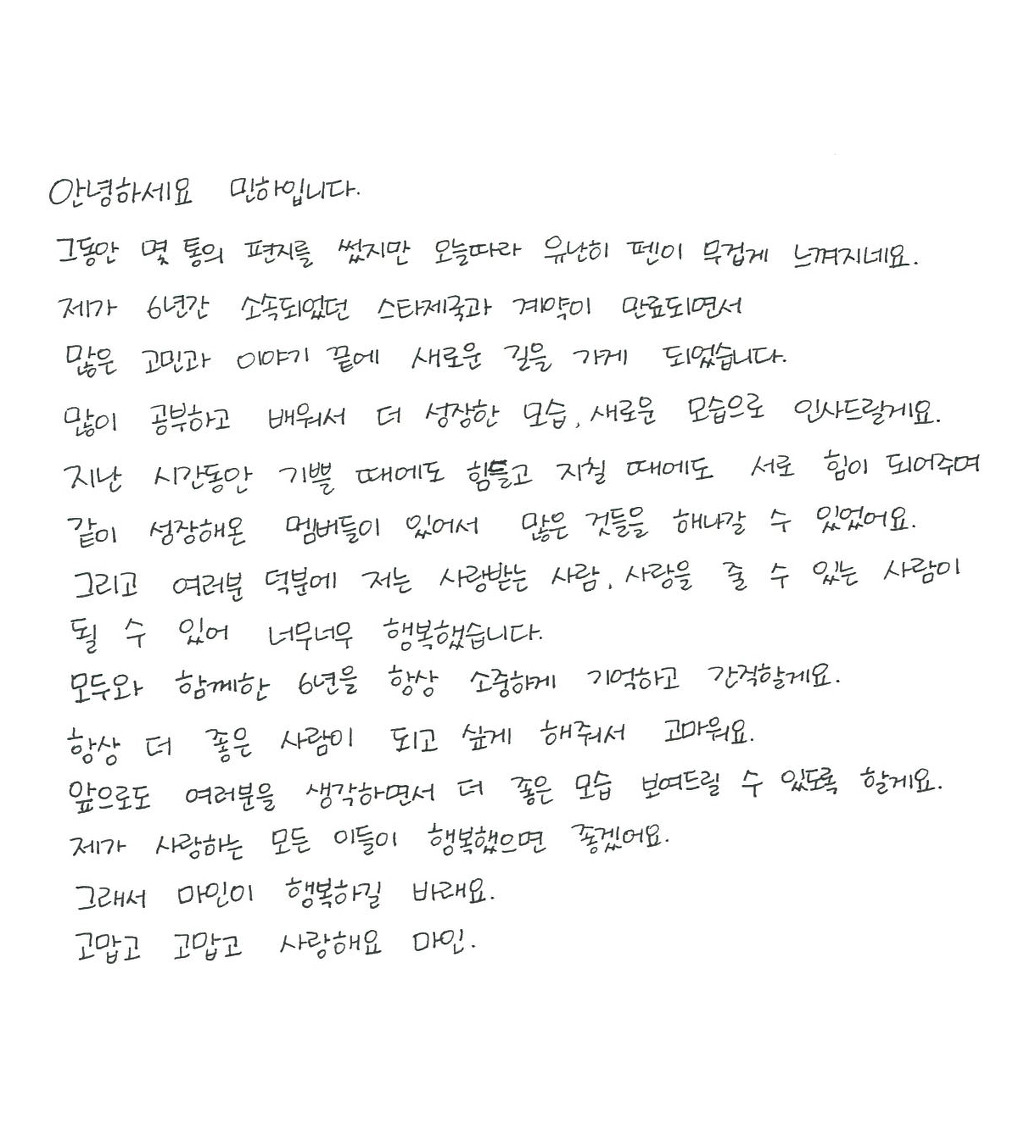 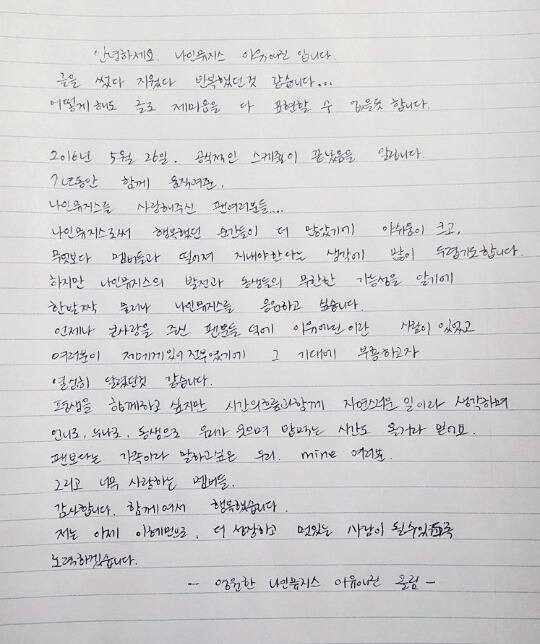 I'm not over Rania, I'm not entirely over Sem/Eunji/Sera even... I'm gonna miss them so much. I'm at work and I feel sick ;_; stay strong MINEs 💔

Hey-hello everybody! :D Sorry for that delay, it's all beacuse life is sometimes hard and very time-comsuming :P
Soo, this Sunday brought us 126th ep of 2d1n 3rd season! That's a looot xD Hope we'll get a least 126 more :D Buut.. what are your favourite eps/specials? For me these will be Going to Seoul National University and Teacher All-Star specials ^^ what about you, guys? ;)

The song itself is ok, though I preffered his solo comeback - Sympathy - from the begging of the year. But I'll give it a go and listen to it a few more times.
Favourite JJY songs, anyone? Mine isn't really his since its the cover of Cha Taehyun's "I love you" from Sugarman[<3]<3<3

Members of the cast of “Flower Crew” have apologized for their heavily criticized treatment of BTS’s Jungkook and actor Kim Min Suk on a recent live broadcast of the show “Flower Crew.”

During the voting process on June 7′s second episode, Seo Jang Hoon says, “Some people may have felt uncomfortable or offended [watching our show], but I think they misunderstood due to not knowing what went on before and after what was aired. It will be our last broadcast, and all I want to say is that we had so much fun filming.” 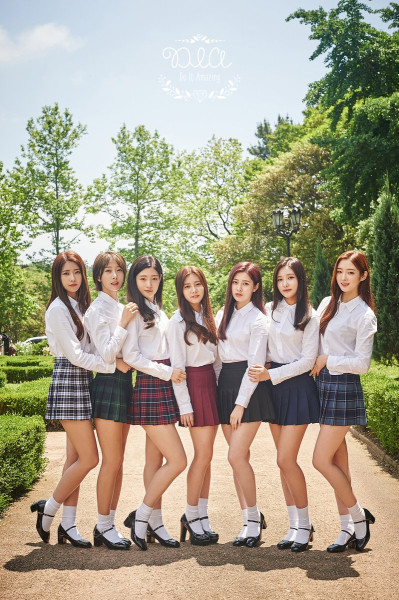 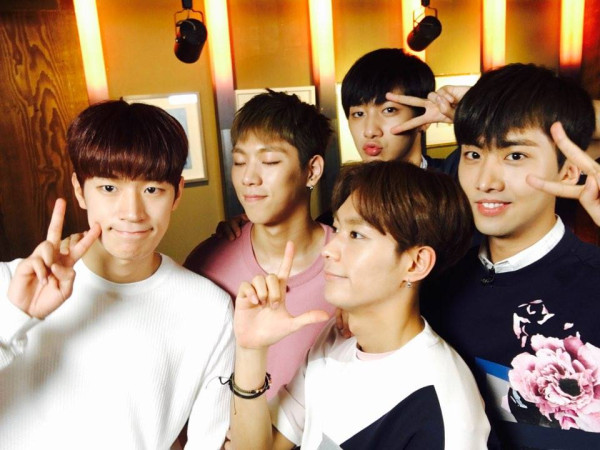 source:arressa_panda, theseoulstory, exidek:,12,3
I know this isn't as relevant for popularity as Melon/Hanteo rankings but it's still pretty great for a rookie group that's only two months old.
Also YNB won't stop making them perform in layers in this heat until they get to 1.5 million views so please watch Back Again before my babes die of heatstroke

On June 7, the show announced that T-ara’s Qri, 4minute’s Sohyun, Heo Youngji (formerly of KARA), SPICA’s Park Narae, Oh My Girl’s Hyojung, and “Produce 101” trainee Han Hyeri would all be appearing on the program.

“Idol Intern King” is planned to air every day and is part of the mobile video platform’s campaign to launch more original content. The six girls will be taking on the challenges of an internship on the program.

The members will be interning at an aquarium, a fashion designing company, and a cheerleading team.

Kim Jong Won from the SK Telecom Media department stated, “We aim to produce fresh content that is tailored to the mobile experience. We will continue to work hard in order to deliver new and original content.”

Jeongyeon is not going to perform because of her leg injury :(
Omona, are you gonna be a star? 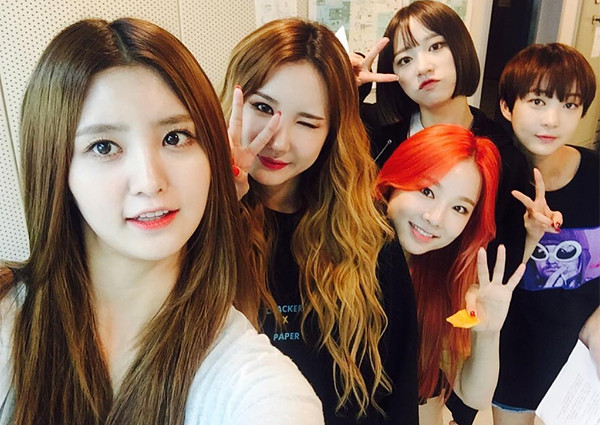 EXID’s Hani was criticized by netizens in the past for crying on some shows, including a time when she cried while eating on “Baek Jong Won’s Three Great Emperors,” because viewers thought she was being overdramatic.

On the June 8 broadcast of SBS radio PowerFM “Choi Hwa Jung’s Power Time,” EXID appeared as a guest and Hani apologized to the audience for causing any discomfort.

Once again an idol apologizing for something they shouldn't while others don't even dare to show their face after a scandal.

On June 7, a JTBC representative revealed that TWICE’s Tzuyu and Red Velvet’s Seulgi will be joining “Girls Who Eat Well.”

Tzuyu has previously shown her love for eating a variety of foods on SBS’s “Three Great Emperors” as well as KBS 2TV’s “A Look at Myself.”

The JTBC representative commented that Tzuyu and Seulgi are well known amongst girl group members currently and have twofold charms regarding their personalities and eating styles. The represenative said, “With the pair joining the show, there is heightened anticipation regarding who will be the #1 eating broadcast fairy.”

The show will feature its first live match on June 15 through Naver’s V App. The first episode for television is slated to air in early July.

Mnet’s “Unpretty Rapstar” is slated to return with a third season this summer!

According to an industry source on June 8, casting for “Unpretty Rapstar” is in its final stages, and the show is aiming for a July 22 premiere.


Who would you like to see compete in this trash, Omona? Are you ready for Trashdy 2.0?

A representative from the company stated on June 8, “The remake of CBS’s ‘Criminal Minds’ will be a collaboration between NEW and Taewon Entertainment. We are targeting an early 2017 premiere, and are discussing the selection of a broadcast station.”

[Read More]“Criminal Minds” is a U.S. crime drama which follows a team of criminal profilers from the Behavioral Analysis Unit (BAU) of the FBI. After premiering in September 2005, it has wrapped up its 11th season and was recently renewed for a 12th season. The internationally renowned series has a huge enough following to have spawned two spin-offs.


Meanwhile, production company NEW previously focused on films until their pre-produced drama “Descendants of the Sun” from early 2016 propelled them to hit-maker status. The pairing of Song Joong Ki and Song Hye Kyo reignited the Hallyu wave all over China as well as around the globe, with productions like OST concerts, photo essays, and director’s cut DVD’s in circulation, impacting Korea’s economy significantly.

Because of this recent success, there is much anticipation for the outcome of NEW’s next drama.

The production of U.S. series remakes is aplenty in 2016. tvN’s remake of “The Good Wife” headlined by Jeon Do Yeon and Yoo Ji Tae is set to premiere on July, and the remake of “Entourage” starring Seo Kang Joon, Lee Kwang Soo, and Lee Dong Hwi, among others, will broadcast on November.

This eye smile prince. I love it. I can't wait to hear the rest of the album. The teasers were soooooo good. Can we get a 'jinwoon' tag, please?