Welcome to the fifth OMONA DISCUSSION post!
Before we start, the usual blabla: If you want to talk about a certain topic next time just post it in the comment section or message me. For reference, click here 1, here 2, here 3 or here 4 for the last OMONA DISCUSSION posts.

2016 is not done yet (2 weeks left!) but phew, what kind of a wild ride was this year? It almost feels like 2k16 wanted to steal 2k14's crown of being the messiest year in history. From KARA, 4minute, RAINBOW and 2NE1 disbanding to G.Na being swept up in a sponsor scandal (which has unfortunately ended her career), from Yoochun and his sexual assault case to the drama-worthy corruption scandal - there was barely time to catch breath.

showminomoney messaged me on twitter and suggested a prediction post for 2017, and I'm totally down for that! According to my research there was no official post last year, we only had two posts with a few predictions in the comment sections (Special Panel Predicts Which Idols Will Rise to the Top in 2016 and 2015, The Best Kpop Year Since 2009?). However, it's easier for us to look back next year with an official list, so I want you to comment your predicitions for 2016 down below. I'm gonna collect them all and update this post with all/the most popular suggestions (tomorrow or so). To make things easier for you, here's a post by

sayuridoll with all the idol groups whose contracts are set to expire in 2017.

So tell me now, OMONA: What shit will go down in 2017? Will After School finally escape the dungeon and bless us with another comeback? Will CL rise to the top and become the new US hephap queen? Will Lay another EXO member join the exodus movement? And most importantly: Will S(o)M(ebody) finally #stoptiffany2k17?

P.S. I'm currently working on an updated version of the OMONA Shitlist. If you want to expose your fave douchebag send me a message with the deets and I'll include them. Don't hold back, we all love drama.

Girl group myB debuted under Maroo Entertainment in 2015 and released two singles, "My Oh My" and "Ddoddo." They were known for their fun, colorful image, all-blonde hair, and energetic dancing. Unfortunately, Maroo announced on December 14th that the group had disbanded. Two members, Moonhee and Hayoon, will be joining a new group called Bonus Baby. The group is set to debut in January.

During the show, Kim Gura asked her, “Have you ever thought of changing your hair style?” Amber has had the same short style since her debut in 2009. Are you excited for them yet? SBS has officially announced that one of their most popular shows ever, Running Man, will shut down permanently in February 2017.

Earlier today, Koreaboo broke news that the current cast members of Running Man had met secretly to discuss leaving the show together. This meeting happened due to Song Ji Hyo and Kim Jong Kook being kicked off the show without much notice.

Rumors began to immediately emerge that Running Man would shut down due to this. Some media reported that, “On December 15th after a marathon of meetings, SBS has decided to end the show with the last episode set to air on the first week of January.”

Omona, let's use this whole mess to focus on the good things and let's talk about our fave episodes, guests and moments. Or even what you would have liked to see on the show that never happened. The end of an era.

I put Baba in the Special Stages because 'Catch Me' is from the beginning of the year and I have no idea why they have a stage all of a sudden and also I have no clue why there's only 5 instead of 6 members I know nothing about this group.

CC for subs and in 720p60. You absolutely need to watch this and the first episode if you haven't already.

Thanks to DingoStudio serie "You have worked hard too!" Jiyeon ,a hardworking b1a4 fan, got to meet Jinyoung when he suddenly showed up on her work place to make her feel better.

are you feeling the CUBEmas spirit, Omona? 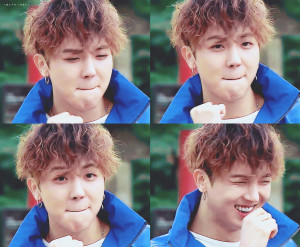 I enjoyed these episodes a lot more than i expected to. the teacher is really good. that part where Jaesuk and Haha did Fear had me laughing & rolling on the floor >.< im guessing we will get next episodes soon :)
Mods can we get a Song Mino tag please ^^ (actually it would also be nice to have Lee Seunghoon, Kim Jinwoo and Nam Taehyun tags too)

a few days late, but i just realized no one made a listening post for "The Full Album"

Your thoughts, Omona? Fave songs? Fave MVs? After having listened to the singles in release order, is the album order as jarring for you as it is for me?

Lots of lovely ladies in the top three this week! Each week I check out the charts for this Friday in a past year and post the top three songs. Then, I pick out two more from the top ten as honorable mentions. Let’s see what was on the charts on the 3rd Friday of December, 2011.


#3 Wonder Girls “Be My Baby”
This is my most favorite WG song. I really liked the choreography, all the clapping and skipping is so much fun! And the little black dresses, ah so cute! I still remember watching that one Inkigayo performance on the stairs and being so scared that they would fall and break their necks.

Five-member boy band Beast announced the official establishment of their independent label, Around US Entertainment, Friday.

Around US Entertainment issued a statement via their official website reading, “With a new year marks a new start for Around US Entertainment and our artists: Yoseob, Junhyung, Doojoon, Kikwang and Dongwoon. It will mark the start of their second life and we are here to tell the loving fans about this new beginning.”

“We are grateful to CEO Hong Seung-sung and the employees of Cube Entertainment, who have created and looked after Beast.

“We are named Around US Entertainment because we wish to engage with and be closer to fans more frequently. Like our name suggests, we will attempt to create more music and content that everyone can enjoy anywhere around us.

“Our artists still have a long path to walk and have much more to do. We promise that we will do our best to provide joy to our fans. Please accept us positively, as the label and our artists walk down this path together.” 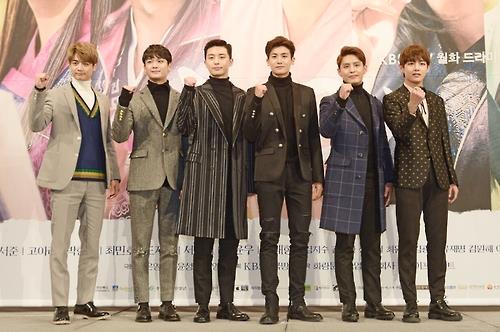 In the distant past of Korean history, there was an age when an elite group of young and handsome men roamed the land to train themselves in the arts, culture and self-defense.

The forthcoming KBS 2TV drama "Hwarang" is the story of these men, called by that name, who discover their passions, love and friendships in the turmoils of the Silla Kingdom (57 B.C. - A.D. 935). In the title roles are some of the hottest up-and-coming stars and idol singers, including Choi Min-ho of boy band SHINee, Kim Tae-hyung, or V, of boy group BTS and Park Hyung-sik of boy band ZE:A.

I lol'ed at the article title, but I'm keeping it.

4th win overall and 1st win on a public broadcast :))


I love them already

Fantagio Music has confirmed that Hello Venus will be making a comeback with a new single & mini album in the second week of January. While the group released three digital singles in 2016, this will be their first official comeback since July 2015.

* An Mi Yeon is the hairstylist for the shoot

❉ I'm sure you know the drill by now. Rounds will be open 48 hours. Posts will be kept at the top of the sidebar for easy access.

❉ Campaign in the comments with your thirst material of choice! But remember to[use spoilers]

❉ I accept banner photos at any time :)

Idol Party: Under the Sky Without a Mother is a segment of TV Chosun's new show where TV-Couple Park Misun and Lee Bongwon pose as the Korean parents for foreign idols NCT Yuta (Japanese) and CLC Sorn (Thai). After meeting for the first time and putting together lists of activities they wish to do as a family, the four of them get to vacation in Bali where they bond over good food and extreme sports.

this show was a neat idea!! i'm so happy yuta is back on variety, he's a sweetie and him and sorn are cute together. park misun is really lovely too. [disclaimer]yes yuta's chin looked bad here, no it doesn't look like that anymore. glad we got that out of the way 🤗.

So, what do you think about it?
Collapse