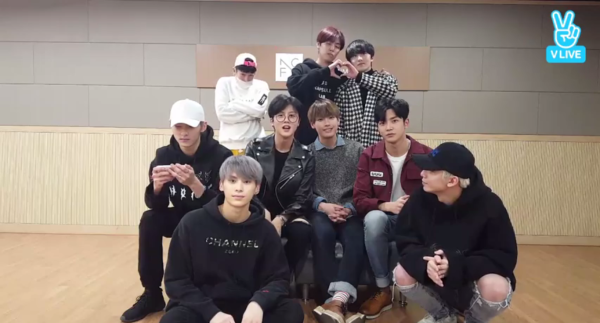 SF9 celebrated their 100th day since their debut with fans through V Live on January 12, and announced their official fan club name!

January 12 is the 100th day since the nine-member FNC Entertainment dance group made their debut with “Fanfare.” That evening, the group held a V Live broadcast to chat with their fans and celebrate the big day, before announcing that they would be revealing the result of their fan poll to pick SF9’s fan club name.

It's a cute name despite lol worthy the "meaning"

Also, check out their comeback hair!! I hope they get a good song for their first comeback.

before anyone asks about why only minho attended: shinee was originally scheduled to attend as a group... up until midnight yesterday when sm edited their schedule saying only minho was going to attend. so, naturally, shawols were both confused and pissed. jonghyun's tweet implies that it may be because of how busy they are with prep for their japanese tour (which starts in two weeks) which i believe!! to an extent but others also think sm may be throwing a hissy fit behind the scenes about some STUFF.

This is my first post mods I Hope everything looks ok ~

“Weightlifting Fairy Kim Bok Joo” healed the hearts of its viewers as it followed the dreams, aspirations, and love of youths. But it wasn’t just the viewers the drama comforted. Actress Lee Sung Kyung, who was the main female lead of the drama, gained a lot of positive energy during the filming process.

The actress stated, “I couldn’t watch the last episode because I was crying. Watching the drama when it aired, I sobbed because I was so sad it was ending. When we were nearing the end of filming the last episode, the director kept saying things like, ‘We have two cuts left,’ and ‘This is going to be our last scene,’ and that made me cry again.”

She smiled as she added, “I’ve cried twice working on a drama, and it was this one and ‘It’s Okay, That’s Love.’ Both were dramas meant to be healing for viewers. Usually, I’m pretty calm and able to keep the tears in, but I cried so much at yesterday’s wrap-up session. When I woke up, my eyes looked like sausages. It looked like when Bok Joo had a pimple.”

Stating that she had never received so much love before in her career, Lee Sung Kyung said, “I’ve never received this many articles supporting me in my life, and it made me wonder if something like this will ever happen again. In the beginning, I really wanted to be praised and have a nice article written about me, and having that become a reality makes me tear up. Viewership ratings aren’t important to me. I’m so grateful and so lucky.”

Omona, what is your favorite moment/scene from “Weightlifting Fairy Kim Bok Joo”?

kongyoo is listed on all profiles as younger than gaon but they continuously refer to gaon as the maknae, so i'm not sure what's happening there.

i loooove that shows make gong myung give nct awards, first mama, now gda it's like keeping it in the family 💓

edited in some better subs

For a nugu GG this is ridiculously lit (also, fanchants already? god bless)

Urgh, this was so fun. They are so fun. I'm so happy this happened. Shownu is GOLD.