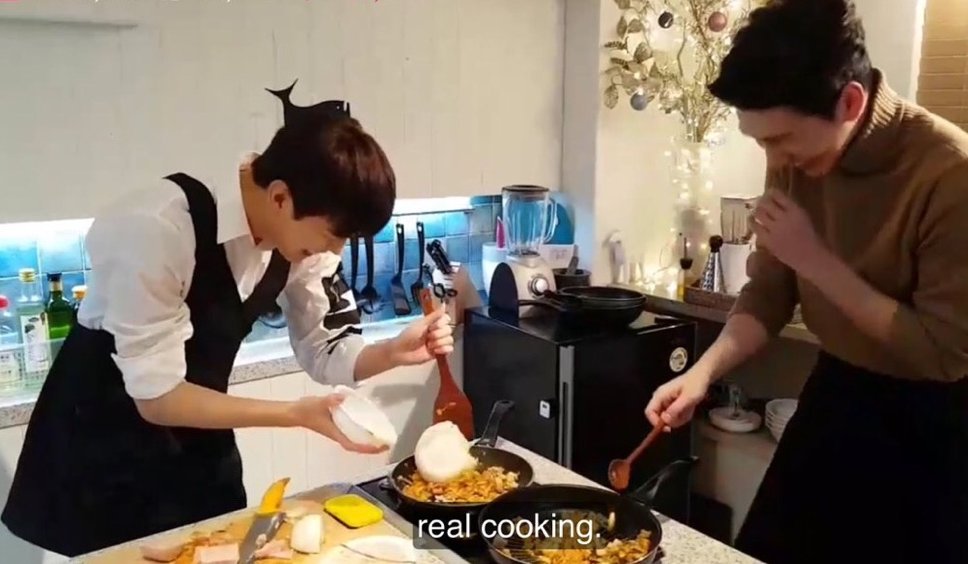 they look so happy perfoming! especially yujeong - you can't help but smile with her

There’s always plenty of competition in the front row at Louis Vuitton, but this season the man with the best look—and the most screaming fans—was Sehun, the star of the Seoul-based musical group EXO. As a member of arguably the world’s biggest boyband, Sehun is used to traveling the world while wearing arresting designer gear, but at Vuitton he switched things up by going understated. Though he’s been known to waltz through airports in menswear looks direct from the runway and change his hair color to rainbow shades, his Vuitton moment was polished. With slick-backed locks, a colorful shirt in a kaleidoscopic print, and a black leather bomber, his vibe was simple, sexy, and perfect for a trip to the Louvre to sit in the front row.

i wish more boy groups did touchy choreo like them tbh

there were news of this a while ago and it came out as "cao lu to collab with a hit girl group" so i assume it's cao lu's single
anyway
what is loen/fave doing........ *deep sigh*

This one was as fun to make as it was difficult.
Over the years k-pop artist have graced us with many beautiful covers of their favorite english song, and when I say many I mean A LOT.
Choices had to be made, maybe your fave cover made the list maybe it didn't, good thing is you can always spam the comment section with what you think are some of the greatest covers.

OP's note: I tried to focus on artist who had already debuted and avoid any reality television competition show like K-pop Star otherwise the list would be too damn long.
That being said, SuPearls rendition of "Fame", Lee Hi's “Rolling in the Deep” and Jimin cover of "Over the rainbow" are pretty great.

cr: h_ongzo J: Due to various reasons, I will be physically away from everyone on Blue Night. I thought I should tell everyone as soon as

jonghyun announced (while crying for fifteen straight minutes) during his live broadcast of blue night radio today that he'll be leaving his post as dj on april 2nd. though he said that he'll come back in the future the tone of the entire reveal was kind of final sounding (but, then again, he's emotional so who knows). he stated that the decision is due to his health and "various reason", such as schedules. (for example: shinee are going to be doing fifteen concerts, with two or three every weekend, throughout the course of april.) information is kind of fragmented for now, but it'll likely become clearer in the coming weeks. that's why the (?) is in the topic title, lol. no one knows if it's for good or for a few months, or. he celebrated his third year anniversary as dj at the start of last month.

ur resident shawol and fyjjong admin is pretty bummed right now, guys. this show meant a lot to him and he was audibly devastated when sharing the news with listeners. there's no word on who's going to replace him yet, but it's def not going to be the same.

I canNOT get over how good Jae sounds in that Shape of You cover!! and How Can I Say acoustic is AMAZING, wow!!! It sounds so good stripped down too. When will these boys stop slaying me????

Taking place primarily at a law firm called Taebaek, this drama tells the story of how a man and a woman go from being bitter enemies to lovers who risk everything on the strength of their relationship to fight corruption and punish the wicked.

The girl getting the makeover was so cute! I wear lashes everyday too, I never thought it was weird.

please adjust the volume on the first video, it's kinda low. there is a part 3 of Astro Nimble, but it's currently not subbed yet parts 3, 4, and 5 are posted!


im posting this on mobile, so i couldnt include any of the members tweets nor i could find any translation on the photo. updated with translated photo


My previous years' Welcoming Collections still untouched in the boxes they were shipped in lol. But I miss Tabi, so I need this. 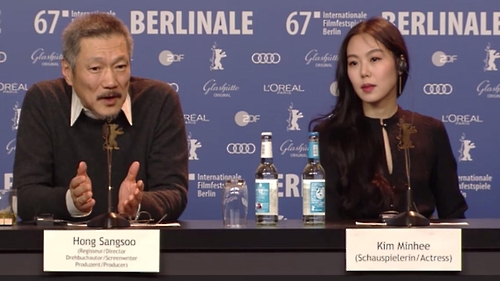 Film director Hong Sang-soo and Kim Min-hee, best actress at the 67th Berlin International Film Festival, will next week make their first public appearance together in Korea since their extramarital scandal broke last June, according to a PR agency Wednesday.

Hong and Kim will attend the South Korean press screening of "On the Beach at Night Alone" next Monday at the Lotte Cinema in Seoul's northeastern district of Gwangjin, the film's PR agency Movement said. The two will hold a Q&A session with reporters after the screening.

The South Korean auteur and the actress both attended the Berlin Film Festival last month. For her performance in Hong's latest work, Kim took home the Silver Bear for Best Actress.

Hong, 57, and Kim, 34, have been engulfed in an alleged extramarital relationship since last June. Neither of them have officially confirmed the reports but have been publicly spotted displaying mutual affection. Hong filed for a divorce from his wife in November.

"On the Beach at Night Alone" has drawn much media attention for its story possibly being based on the director's intimate relationship with Kim in real life as the main characters' conversations strongly advocate for an extramarital relationship. 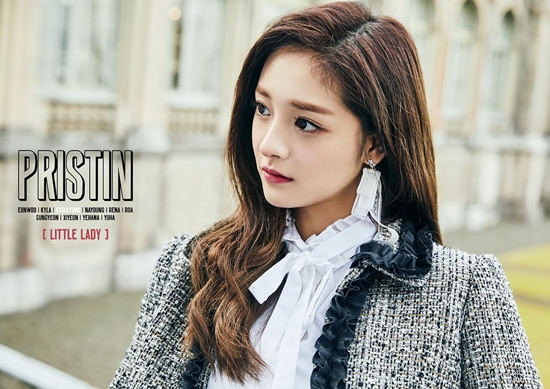 i take everything i said back, this photoshoot is amazing and they all look beautiful.

I don't know him... Will anyone be going to his concert? I'll be going to the ones in Osaka. I'm excited, it'll be my first time actually stepping foot on more than just an airport in Japan.

On March 8, concert promotions company Dream Maker Entertainment released a statement informing fans that EXO’s Lay would not be attending concerts in Kuala Lumpur, Singapore, and North America due to other commitments.

The company apologized to EXO fans for the unfortunate news and stated that the rest of the “EXO PLANET #3 – The EXO’rDIUM” tour will be performed by the remaining eight members of EXO.

While many fans were disappointed by the news that Lay would not be in attendance, others were understanding and emphasized how busy Lay was in China.

i guess he got a new part-time job @ starbucks, they probably pay more than sm hmmm

i was 99% sure i saw this posted here but I can't find it in any related tags or in the search so? maybe it was my tumblr dash. anyway enjoy these precious children!

Hello, it's me again!

Highlight to record 'Weekly Idol' tomorrow with lots of anticipation + episode to air by this month https://t.co/ZfyHH3dHvk pic.twitter.com/65B1Mghxnf

“The secret weapon KARD is us.”

KARD has confidence. Their debut project single rose to US’ Main iTunes Chart and was recognized by Billboard. Recently in Korea’s music scene, the worries of a co-ed group debut’s which is rare have been washed away.

The base of KARD’s confidence is their unique presence from the start.

It's a spot the difference game between versions A & B so get your spectacles on and play along in the comments, Omona!

(V Live link in case this goes down)

When Yongguk walked in I lost it 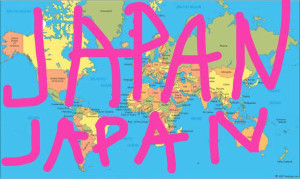 On the occasion of International Women's Day, I wanted to write an article about women in South Korea. Now here at OTD, we are all familiar with girl group members, actresses and female entertainers. But what about the wealthy, successful and influential women in South Korea?

Well here are the female role models you can look upto for inspiration.

Let me know what you think about the list, or if I've missed anything, or enlighten us with info on your South Korean role model : ) 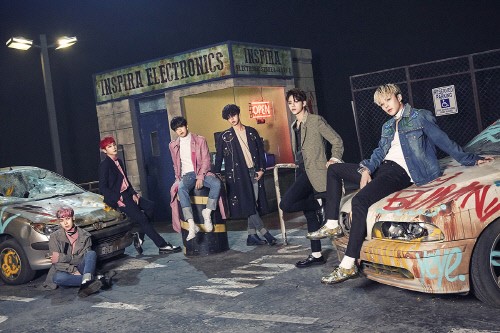 The group’s name is now side-by-side with Ed Sheeran, Bruno Mars, Beyonce, and more. With the release of their new song, B.A.P has topped the iTunes charts of Russia, Finland, Norway, Thailand, and more, which proves that their popularity has increased globally.
( Collapse ) Miss A Min and G-Soul have recently broken up after about 6 months of dating.

Korean media Sports Chosun first revealed in a breaking report that Min and G-Soul had recently broken up. JYP Entertainment later confirmed the news to the media and the two have now gone back to being friends and label mates.

The two of them admitted to dating back in November 2016 and dated for approximately 6 months.

G-Soul is also set to enlist in the Korean military soon after stating in February that he will be enlisting for full duty.
( Collapse )
sources: koeaboo 1,2, osen, sports chosun

Koreans were polled to find out what they consider to be the worst questions to ask on a blind date and these are the top 7.

For some, blind dates can be a thrilling experience, but they can be terrifyingly awkward if you don’t know how to go about them. It’s natural to ask many questions about your date in an attempt to get to know them better, but there are some subjects that many believe are better left untouched.

These are 7 of the worst questions to ask on a blind date according to Koreans:

1. What does your father do?
In Korea, it’s considered unusual and crass to ask this question on a first date.

2. What are your religious beliefs?
Each religion is different so it is acceptable to briefly mention religious beliefs in passing. If you try to dig deeper, though, it may cause your date to become uncomfortable. Your date may become confused whether you decided to meet them on a blind date or for evangelism.

3. What political party do you support?
Of all the possible conversation topics, politics is definitely the most touchy. If you’re interested in not offending your blind date, then avoiding the topic of politics might be a good idea.
( Collapse )
sources: koreaboo, insight, donga

omona, what was your worst first date? do you follow some of these first date rules?

I'm amazed by their talent, beauty, and grace