Sorry mods, I misspelled Gaeko crawls away to die

South Korea’s social media and online community are divided over a fan who was caught using a hidden camera at a GFriend fan event.

On Friday, GFriend’s Yerin caught a fan who was secretly filming her with a pair of glasses fitted with a hidden digital camera at the group’s fan event held in Seoul.

While sitting opposite the man, whose identity remains unknown, Yerin noticed something was strange about his chunky black horn-rimmed glasses.

She persuaded the man to take the glasses off, saying she wanted to see his eyes better.

With a quick check of the inner rims of the glasses, Yerin confirmed that the eyewear contained a hidden camera.

Without making any fuss, she finished the session with the fan. But as soon as he moved from her desk, Yerin reported him to her manager.
( Collapse )

omona, what do you think? is filming with a hidden camera any different from fansites filming/taking pictures?

Baekhyun's solo 바래다줄게 on SM Station2 is releasing on the 14th at 6PM!! Teaser releasing at midnight of 8th!!https://t.co/RO0vHkPpxL pic.twitter.com/Y6DPj37k8l

sm hitting me with all my faves in a row 😍

Kim Soo Hyun showed loyalty to his friend and co-star IU by featuring in a music video for one of the songs on her upcoming album. IU will make a comeback after one and a half years with the new album, which will be released April 21.

Recently, a source from IU’s agency reported, “Kim Soo Hyun recently filmed a music video for IU’s new track. We have yet to decide if this song will be the title song or a follow-up track.” The agency source continued, “We are currently in the midst of filming music videos for others songs as we plan to release several music videos for the upcoming album.” If you don’t know the name Lee Sung-Kyung, you’re not alone, especially if you live in America. But in South Korea, the Seoul-bred 26-year-old is a television and social media sensation, with 5.5 million followers on Instagram alone.

To put her celebrity into perspective, in a country of some 50 million people, more than ten percent of the country is following her. That would make her proportionally right on par with Gigi Hadid’s following in America. On April 5, Block B’s agency stated, “P.O has been confirmed to star in the pre-produced drama "Our First Romance". He will be entering filming soon.”

“Our First Romance” is the latest project written by tvN’s “Cheese in the Trap” writer Go Sun Hee, and is a co-habitation romance drama about two childhood friends. CNBLUE’s Lee Jong Hyun and actress Lee Yoo Bi have been confirmed as the main leads.

“Our First Romance” is currently in discussion to air sometime in the middle of this year.

The only other info I've found is that this might be a jtbc drama? But there's really not a lot of details out there. I'm always here for cohabitation romcoms!

Gary revealed to have gotten married in secret, no wedding ceremony https://t.co/lb1mdvX47R pic.twitter.com/DAcP4XfFyy

On April 5th, Gary announced via SNS that he has married someone and made a lifelong promise with them.
Gary also stated that he will not be having a wedding ceremony but he will be holding a simple ceremony for the wedding as his wife is a non-celebrity. Although some of you guys may be shocked by the sudden news, please give us your blessings.

DramaFever will premiere its original K-drama series “My Secret Romance” on April 17 both in the U.S. on its streaming platform and in South Korea on cable channel OCN. It marks the first time that DramaFever will stream a show in the Americas simultaneously with its overseas broadcast. New episodes of “My Secret Romance,” running 40 minutes each, are set to stream every Monday and Tuesday at 9 a.m. ET on DramaFever with English, Spanish and Portuguese subtitles.

Starring Sung Hoon and Secret idol group member Song Ji-eun, "My Secret Romance" is the story of a man and a woman who have a one-night stand. They meet unexpectedly three years later when the woman comes to work as a new nutritionist at the company cafeteria where the man works. He’s the resident prickly second-generation chaebol.

Like in all good romantic comedies, there’s a love triangle, and rookie actor Kim Jae-young is there to fill the third leg. Song Ji-eun’s character used to have a crush on him way back in the past because of his warm friendly demeanor, but now they’re best buddies in a strictly platonic relationship. He’s a successful travel writer and the owner of a book-bar that’s right downstairs from Song Ji-eun’s apartment.

OCN seems like a strange choice for a romcom, but they created a new drama timeslot just for this, so I hope it turns out well for them. Ugh at the "prickly chaebol" though.

i thought this was a joke at first when i saw the somi name lmao. rumours are they're adding these girls in since the group lacks a strong vocal line after seunghee left. is dani still under mbk??? surprised they never added her into DIA after her pd101 stint 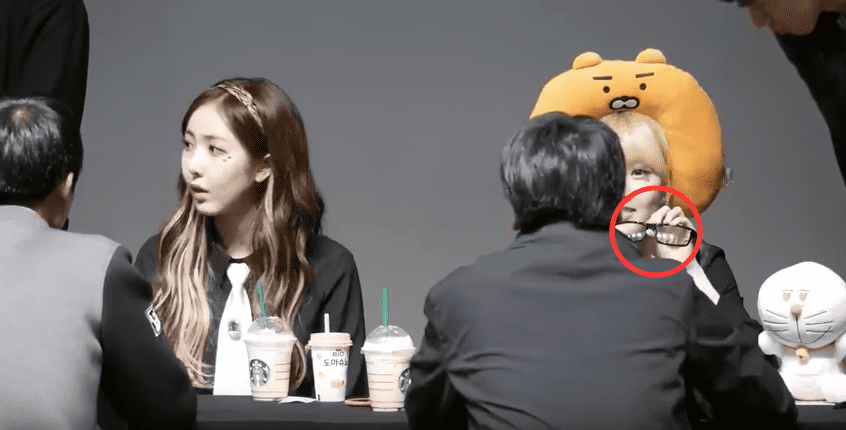 On March 31, GFRIEND had a fan sign event in Seoul. While the girls were in very good moods, the atmosphere suddenly cooled when some of the members noticed that a fan was wearing glasses with a small, hidden camera on it.

It appears that Yuju noticed the camera first but didn’t comment on it besides possibly leaning over to her bandmate Sowon to inform her of her suspicions. She also appears to have told SinB. Yerin was the next person to notice, and she asked the fan to take his glasses off. After examining the glasses, she notices a small camera on the glasses. After the fan left, Yerin looked uneasy as she told the manager that the fan was using a hidden camera.

The incident became controversial, as these tiny cameras have been part of a growing body of crime in Korea where men have been caught filming women inappropriately and unknowingly. Fans pointed out that taking video or photos was not prohibited at this particular event, so there was no reason whatsoever for the fan using such devices without the members’ consent.

About this, GFRIEND’s agency Source Music responded, “The fan in question was caught on scene and was asked to leave with a warning. We confiscated the glasses with the hidden camera. From now on, the particular fan will not be allowed to attend any more fan sign events.”

i'd hope source music would be more strict with security at fansigns and inspecting the gifts fans give the girls. i do wonder how yuju and yerin noticed it so quickly. do these glasses look noticeably different/chunkier?

Gong Minzy has decided on the date for first solo concert in Japan.

On April 4, her agency Music Works said through its official Japanese social media account, “Gong Minzy has confirmed her first Japanese concert. It will be held on May 5 at Hitotsubashi Hall in Tokyo, Japan.” They added, “During the show, she will also be performing the new songs that will be released in April.”

With this announcement, Gong Minzy solidifies her plans to promote in Japan as well as in Korea.

Meanwhile, she will be releasing her first solo album, “MINZY WORK 01 UNO” on April 17, to the excitement of both herself and her patiently-waiting fans.

@1:58 Umji has a major slip (as seen in the thumbnail) and Sinb is visibly upset, @2:15 Sinb forgets to sing into her mic

same as the last 2 times, they performed on an outdoor stage in the rain. why can't whoever is building these damn stages put a cover/ceiling on the top so that rain isn't at least falling directly onto the stage??? and is it too much to ask to get the stage wiped dry in between performances??? all these things that can be done but aren't simply because the event organizers dgaf about the performers minzy was my first bias when i got into kpop back in 2011, pray for me to survive this omona!

i like this so much better than the dance practice! i demand a part switch ver. next.

Are you looking to get your hands on a signed album, some photocards, or even a mini album photobook or vip entrance to a fanmeet or showcase? And donate to charity at the same time? The details of Minzy's makestar campaign have been released and you can check out the campaign at makestar's website!
( Collapse )

i have tears in my eyes!! they're so cute! and they're doing Dingo Music promo!! and they're just so good!!! aaahh! I need full versions of all of these!

source: Fact In Star, starbug 1 2, Dingo Music, ALL THE K-POP

Try to figure it out yourself or

[click here to find out what it says]It says

there was news recently that SF9 would be getting a mid-April comeback. I didn't think they'd drop teasers so soon!

her new EP Somablu is available for purchase on itunes if you want to check out some of her other songs!