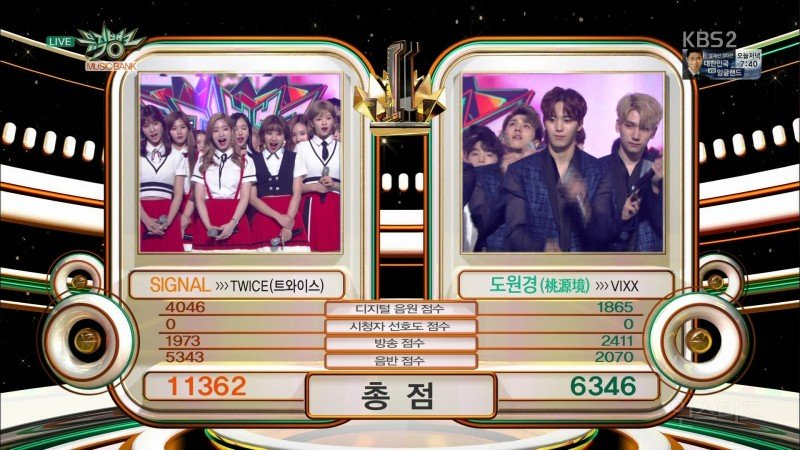 Who is in charge of outfits this comeback? Fire them! I did see rumors that they promised to perform in LOA clothing at some point, that'd be fun. But it's probably going to be a fansign event or something.

It's already the third win for Signal, and over thirty wins totalled just on music shows. What do they even do with all this trash clogging up their dorm?

The stage design today was so pretty and dear god, their vocals put everyone else to shame

Great behind the scenes episode of the Unnies' adventures at Music Bank with their first (+ last) broadcast stage!

Episode Highlights:
• The Unnies' practice before their Music Bank stage
• Jin Kyung's leg lift for her husband!
• Unnies expressing their thoughts, fears, and wishes
• Unnies' arrival at Music Bank + gifts from fans!
• Unnies' dry rehearsal + coaches cheering them on
• Unnies' last online (VLive) broadcast + funny fan phone calls
• Sook's surprise at the Dongsaengs (They're not our fans, are they?)
• Jin Kyung's reaction to the Unnies' on the charts (so sweet!)
• The Unnies meeting with the Dongsaengs
• The Unnies' reaction to their chart positions (alone + w/Dongsaengs)
• The Unnies' getting ready to perform "Right?"
• The coaches cheering their girls on backstage
• The Unnies' speech on Music Bank
• Everyone gathering together to recap (Here come more tears!)
• Congratulatory messages for each of the girls (Just when you thought you were done crying...)
• Fan version of "Right?" Music Video

this comeback is EVERYTHING. they just had their 2 year anniversary yday 😭 (check out vapp) ALSO, theyre killing it album sales wise topping their previous sales (post when first week sales come out) and digitals, amazing

are music core videos always this pixelated? anyway, jinhwan jay and chanwoo look so good in bling bling! and i want the dance practice vid for BDAY

in related news: yg posted about checking out namtae's song on his IG, and namtae reposted it saying thank you

there's also a different version of episode 6 floating around that has the dance classes that were previously shown in previews and is cut from the official subbed upload of the episode above. watch it here.

[!] Lia Kim and Jung Koosung made A.C.E's official choreography for “Cactus.”
i looove this choreo the more i watch it & it's really warming me up to the song! for reference, this was posted today and—at time of queuing—has a little less than half of the views of the official mv
SOURCE: 1million dance studio@yt

Congrats to Twice! They had the highest possible score for digital + physical sales!!!