No nudity in Korean edition of Playboy

The Korean edition of the Playboy magazine hit the shelves of local bookstores Monday covering a wide range of topics from celebrities to social and political issues, and lifestyles. There are no nude photos, its local publisher Kaya Media Corp. said.

Kaya Media Corp. signed a contract in January with Playboy Enterprises, the owner of the U.S. magazine, to publish the Korean version of the 63-year-old monthly magazine.

Playboy was launched in December 1953 by Hugh Hefner, and has become one of the most recognized adult magazines in the world.

In recent years, however, it tried to stay relevant by adapting to the trends of the times. As part of such efforts, the company decided not to print nudity in the magazine in March last year. But it reversed the decision earlier this year to bring nude photos back.

Cooper Hefner, the founder's son, wrote on his Twitter in February, "I'll be the first to admit that the way in which the magazine portrayed nudity was dated but removing it entirely was a mistake."
( Collapse )

PS This post took WAY too much time for me to have messed up. Fingers crossed 🤞

loving the outfits and choreo!! someone in the comments said BCHCS' performance looks like f(x) ot5... get it yember!

The final episode recorded a 12.065% ratings, a 2% increase from the previous episode which is an astronomical jump for a cable tv show.

Baek Mi Kyung, screenwriter of both previous record-holder “Strong Woman Do Bong Soon” and “Woman of Dignity” has shared her thoughts on her two extremely successful dramas.

Baek Mi Kyung explained, “I really didn’t expect [‘Woman of Dignity’ to do so well]. I thought the audience would be limited. Rather than lots of people watching it, I thought there would be a small number of hard-core fans, but I’m thankful that so many people are watching it. I didn’t think the drama’s storyline would gather a wide audience, and I tried to write a drama that people who sell or buy at the luxury goods section of the department store can easily watch.”

Sources: koalasplayground, soompi (via naver)
WoD has superior writing and superior cast comparing to SWDBS, and is so much better than mediocre Goblin, so you should all just watch it tbh

Miya's Cam is Sunmi's own reality show/vlog on Youtube. In the first episode she explores Tokyo. Click CC for subs!

( *click* to be redirected to the “LIGHT ON” vid )
( Collapse )
( Collapse )
( Collapse )
i was gonna make a pimp post but i might wait till their debut era is over. their harmonies in “man in the mirror” totally make the cover for me (and wyatt ruins it, but stays my fave) and i love the “cat's waltz” video so much, including the bad boyband choreo, tbh. hopefully the tweets embed okay, if not i'll fix them later~
SOURCE(s): onf@tumblr; 온앤오프 official@yt (lights on | cat's waltz); kbs coolfm@yt; ruru_ruru_new@twitter; yuika_0125@twitter; teochi@twitter

my message to y'all 💙 pic.twitter.com/UkqVpTqNS9 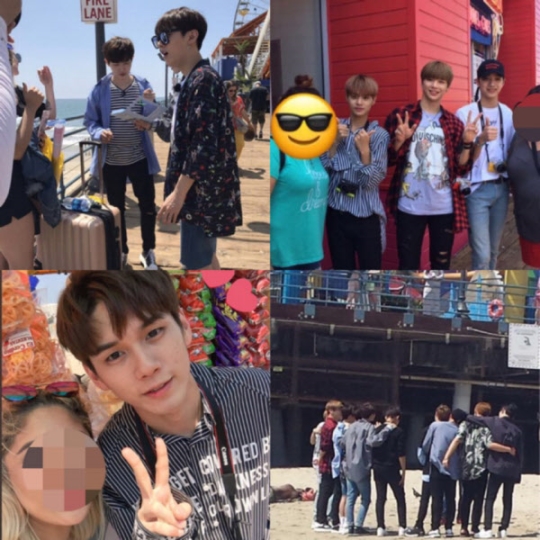 Fans have recently spotted the members of Wanna One filming in Santa Monica.

According to a source from their agency, the group went to the United States on August 19 for KCON 2017 LA, and they also began filming the second season of their reality show “Wanna One Go” while they were there.

The first season of “Wanna One Go” focused on showing their dorm life, but the second season will reportedly be showing the preparation process of their first performance overseas, along with the rest of their fun trip in the U.S.

Mnet’s “Wanna One Go” had a pretty successful run with its first season, earning 1.387 percent in viewership ratings for its first episode and 1.706 percent for its second episode. These numbers are quite significant for a reality show airing on a cable program.

The second season of “Wanna One Go” will be airing this fall.

how fun for them and how lucky for these fans that came across them there. i can't wait to watch the 2nd season!

8 K-Pop Idols Who Know How To Enjoy A Good Bookhttps://t.co/Q58OTkLJux pic.twitter.com/bw7EE3gdHu

Because they are performers, it can be easy to assume that idols don’t do much reading. With their impossibly busy schedules, it would be difficult to find time to sit down with a good book. However, some idols have the motivation and mental strength to continue their literary passions. As a celebration of their intellectualism, we present a list containing eight well-read idols (in no particular order).

an excuse for a book post, tbh. also are there any idols missing from the list, yada yada? (also: ignore the last submission, please, mods! i noticed some coding issues after i submitted, blegh.)

THEY ARE ALL SOOOO GORGEOUS Congrats to them! Midnight Runners opens at select AMC theaters in the US on Friday. I've definitely driven over an hour for a Kang Ha Neul movie before and I'll do it again.

[Spoiler (click to open)]i dont really have faves on this show but i cant stand: junoflo, black9, ja mezz; if any of them make it to the finals is2g.

cuties!! Juyeon is soooo gorgeous! i can't wait for this! bless 1thek for providing subs

it's a cute song!

The original song is 2U by David Guetta feat. Justin Bieber. The full cover will probably drop on his birthday.
When will Bieber disband?

The official statement is as below:

Finally, an informative yt video that shows us how kpop business works... yikes, the way that kpop companies treat their idols is just stupid for me...
What do you think about points he made in the video and about that main/lead vocal and sub-vocal system? (is that system just an excuse to put some visuals in a group?... :P)
Did you know his blog "kpopvocalanalysis.net" before? If not I recommend you to visit this site, cause you'll find some interesting opinions regarding k-vocals there:P
Edit: I've changed this post's title just in case somebody thinks that I'm targetting Twice rn, which is not obviously^^

they had to pre-record because the boys went to kcon and aren't able to perform live, but i didn't think TheShow would basically make a whole new MV! lmao i love it!

p.s. check out my