Autumn is here and this time of the year is a great opportunity to change up what you're wearing. Need some inspiration for a wardrobe refresh? Like to see famous people wear something really ugly that probably costs the same amount as your student loan debt? Want to see a bunch of people in hats? This is the post for you!

Here are some examples of my favourite idol fashion so far this autumn and the best time to wear it for someone like us who isn't photographed every time we go the airport!

Whose outfit will you be copying? Which stylish idol have I missed off the list? Can you pull off a purple velvet tracksuit?

This is so cute they're so happy and energetic! Hani doing Le's part killed me

The movie “The Beauty Inside” (trailer above) will become a drama with a slight twist!

The representative continued, “Writer Lim Me Ra, who worked with Writer Kim Eun Sook, will be in charge of the screenplay. We are currently discussing the specifics and are aiming to air the drama within the first half of 2018.”

PD Shin Won-ho's (of the Answer Me franchise) new black comedy Wise Prison Life is about the daily lives of inmates and guards at a penitentiary, told through the eyes of new fish Park Hae-soo.

Park Hae-soo stars as a superstar baseball player, famous for being a dependable pitcher. But when he’s at the peak of his career and about to be drafted to the Major League, he ends up in an accident that lands him in prison. The drama is about his growing pains as he learns to adjust to the strange new society and customs within prison walls, from becoming a number instead of a name to living with so many people in such small quarters. I imagine it’ll be very different for him, as a beloved athlete who’s sure to have fans in prison.

This is yet another drama where there's about six different drama titles floating around. Sensible Prison Living, Prison Playbook, Smart Prison Living, etc are all this drama. I haven't seen any confirmation of any of the big subbing sites picking this up yet, but it's one of the only upcoming dramas I'm looking forward to, so I hope it does!

Apparently GOT7's JB also posted about this song on his personal Instagram:

are you now or have you ever been on a boat, Omona?

First song released off his new EP My 20s out next week.

[lyrics]Every year, from November to February
I think of you and my heart flutters
You’re the one I cared about most
I’ll be alright once March comes

It’s already the middle of November
Before it gets even colder, I’ll hold your hand
Until winter is over
Don’t worry about catching a cold
Cuz I’ll heat you up even more if you get cold

How come time is going so fast?
I should take out my goose feathered parka
Whenever I call out to you, the steam from my mouth
Makes your name seem even warmer

Your hand feels especially cold
They say your hands get cold if you have a warm heart
My hands are warm
And my heart will be warm too
So look to your side, hold tight to my hand

Now it’s December, the first snow
I bought a gift for you and wrote a letter
You said you knitted a scarf for me
When you wrapped it around my neck
I thought it was summer
Because your hands were so warm

Because we’re so close together
I’m looking for more places to stick to you
You keep saying that I’m sneaky
But we might die of coldness if we’re apart
And why is your face turning red?

When we’re at a cafe
You always order ice coffee
You wanted to take a selfie, angled at 45 degrees
As we take a picture, you’re in my arms
Our temperature is 45 degrees

After the hot January passes
The snow doesn’t melt
and my feelings keep growing
Not even knowing our break up has come
Not knowing as winter passes, it’ll take you away too

Every year, from November to February
I think of you and my heart flutters
You’re the one I cared about most
I’ll be alright once March comes

Every year, from November to February

Over the past week, the mini-album has been teased with a song title and lyric reveal each day. So far 15&'s Park Jimin has been named as a second guest feature.

Source: YUEHUA KOREA
may hyungseob as judy never die and is euiwoong a ship's captain cos he's the leader? so cute.

aaahhhh i lovvveeee!!! why they bothered making a movie version is beyond me

FNC's softest band is making a comeback soon! two of the girls in the vid are from the upcoming FNC girl group, and the other is Gugudan's Mina! <3

i know that i've skipped a lot (like interviews and articles) but there was just too much out there so i just focused (mostly) on tweets. i'm glad that everything went so well for them, especially because they were so nervous. yesterday also marked the one year anniversary for their first daesang win! 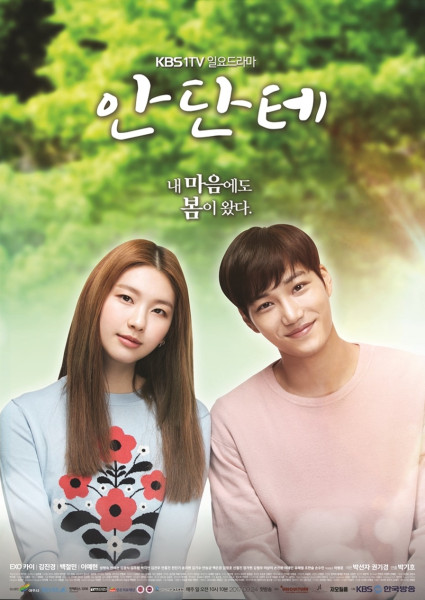 Watch:
Dramafever|Myasiantv
source:Asianwiki
Anyone else been keeping up with this? I started for Kai but I'm enjoying the fluffiness of the series.

[Blind Gossip]
It was so much fun to watch the South Korean boy band BTS perform at the American Music Awards last night!

This young female actress was especially eager to meet the hottest boy band on the planet. She singled out one of the boys and went over and introduced herself.

"He said hello and was nodding and smiling at her, so she thought he understood what he was saying. She exchanged phone numbers with him and walked away thinking she had scored something valuable. She called a few minutes later, but it turns out he gave her the phone number of one of the team assistants!"

The reason he gave her someone else’s number? He speaks no English!

They might never have a love connection… but wouldn’t it be great if he could just call and say, “I Need U, Girl”?

---
I mean, she got rejected but who ya'll think it was? I'm leaning toward Tae and one of those Riverdale girlies.

THEY PLAYED USSSSSSSS. THE SECOND ALBUM ISN'T CALLED SUNSET, IT'S MOONRISE I'M DEAAAAAAAD, I'M NOT READY FOR THIS. WHY DO THE CHORDS SOUND LIKE "I NEED SOMEBODY" I'M DEAD SAVE ME

Entertainment Tonight caught BTS on the AMAs red carpet yesterday. The beginning is cute, but things get hilarious around 1:38 in the video above. Highlights include:

The ET interview is the funniest thing I've seen yet.

VISUALGON!!! I'm so hyped for this rn! They all look really good and this sounds great!
Collapse