EXID wore black bands around their arms for their performance :(

You can read more about Dding Dong on their website HERE. This cheered me up so I thought I'd share it with Omona.

“Law of the Jungle” has announced the full lineup for the upcoming Chile season!

“Law of the Jungle” in Chile is set to air in February.

SOURCE: TSENT2008
HIGHLIGHTS INCLUDE FLASHES OF DAEHYUN AND YONGGUK'S TUMMIES
ALONG WITH YONGGUK CONSTANTLY FIXING HIS SHIRT/JACKET.


Female celebrities will discover their true selves and heal their wounds through learning ballet and meeting new people. Park Jumi joins the club by receiving hearty cheers and takes the successful first step as she shows off her enthusiasm and flexibility. The worldly famous ballerina Kim Joowon becomes the artistic director of The Swan Club as a big supporter of the team. However, Joowon’s tough criticism gives the members a wakeup call.

Such a beautiful song and MV

Every week I go through the charts for this day in the past and post the top three songs. Then I pick out two more from the top ten as honorable mentions. This week, we’ll be going back to the 4th week in December, 2012. Once again, this year is proving to be a big black hole. I don’t remember any of these songs, or any of the videos. Do you remember these?


#3 Secret “Talk That”
Okay, foreals where is Secret? Did I miss some breakup news? They’re still together, right? I think they all look pretty in this video. I also found my lookbook for New Years, sequins and faux fur. 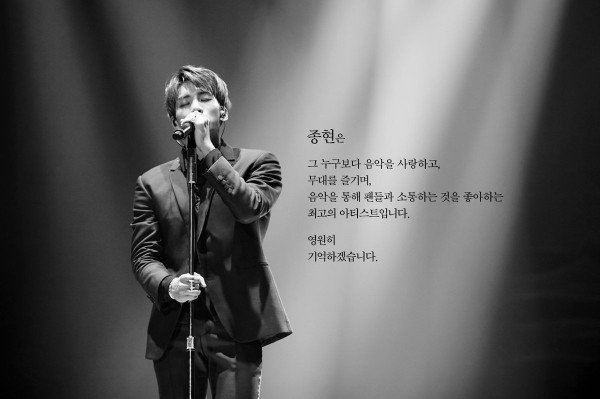 ©
A compilation of idols, singers, actors and more people from the industry saying goodbye to Jonghyun
( Collapse )


You were respected, admired and well-loved all over the world Jonghyun
Wherever you are now, rest in peace

Hwayugi, the new Hong sisters’ drama, stars Lee Seung-gi as the monkey god, Sun Wukong, originally based on the character in the Chinese classic novel Journey to the West. His counterpart, the Bull Demon King, will be played by Cha Seung-won, who will be a gentle but vain entertainment company CEO in this retelling. And the monk from the source material has been reinvented as a female real-estate mogul who can see spirits and resells houses known for their negative energy, and she’ll be played by Oh Yeon-seo.

i know it was added into the last post but i figured it deserved it's own, given that kibum's letter wasn't able to have it's own.

From his digital album "Winter Special Gift". English version can be found here.

Yang Hyun-suk took to IG to answer some fan comments regarding iKON, WINNER, and Blackpink's comebacks:

[IG] YG posts photo with caption “#iKON #2018_YGFirstRunner #YG” iKONIC asks “So when is the comeback?” and YG replied “January...100%” THIS BETTER BE LEGIT 😭❤️ pic.twitter.com/ZsVpRKaYaH