Seungkwan - the MC - in panic that time is running out lmao

“My ID is Gangnam Beauty” tells the story of a young woman who decides to change her life through plastic surgery after being teased about her looks from an early age. She enters college, but she realizes that the campus life she had been dreaming of is drastically different from what she had imagined, and she is forced to search for the true meaning of beauty. The drama is based on the popular webtoon of the same name by Maeng Kee.

Kang Mi Rae (Im Soo Hyang) is a pretty freshmen who is both timid and sweet. Do Kyung Suk (ASTRO’s Cha Eun Woo), a cold “tsundere” (cold on the outside, warm on the inside) has contrasting charms with his heaven-level good looks and ground-level personality. Hyun Soo Ah (Jo Woo Ri) is the idol of the chemistry department and is willing to do anything to be loved. Yeon Woo Young (Kwak Dong Yeon) is Do Kyung Suk’s roommate Yeon Woo Young, who is a graduate student and a TA studying chemistry.

"My ID is Gangnam Beauty" premieres Friday, July 27 on JTBC.

The new album, by and as SUPER JUNIOR-D&E, will be released on the 8th of August, after waiting for three and half years. The tune "SUNRISE" was written by DONGHAE, which makes any fan feel free, like in the midst of a summer day. Their MV was shot, for the first time in Japan, featuring fusion between the nature and projection-mapping. Check it out!

James, who is a former member of Royal Pirates and got his hand almost cut off in an accident, started a Kickstarter this past February to fund his 1st EP. Within 11 hours, the goal of $27,600 was reached, and eventually grossed $89,753. After months of work he has now finally released his 1st EP called "The Light".

Wynn Entertainment has confirmed this with their fancafe post. pic.twitter.com/WZC3LNYQVJ

No details of his sudden passing were revealed. They just debuted in May of this year. He also appeared on MIXNINE.

Every week I go through the charts for this day in the past and share the top three songs. Then I pick out two more from the top ten as honorable mentions. This week, let’s go back 8 years to the 4th week of July, 2010. The top three have already been posted so this time we'll check out some live performances. Okay, off to get tacos, have a good weekend guys!


#3 G.Na featuring Junhyung “I’ll Get Lost You Go Your Way”

I love this song. It’s my favorite G.Na song, and one of my most favorite KPop songs in general. Ugh, I love it so much, I had wished she did more songs like this. It’s been so long since we’ve heard from her, I hope she’s okay. Here’s her Music Core debut stage.

MASC’s Chibin has uploaded a mysterious but concerning post on social media about assault and abuse.

On July 26, he wrote on Instagram, “You’ve committed a crime and it seems like you want to run away. It seems like you don’t intend to apologize at all for the scars you gave me physically and emotionally that day, hyung. You’re the only one I unfollowed, hyung, and you ask me why? Because it gave me chills to think of you uploading comments like nothing happened. I think that you’re reading this. If I look okay to you, that’s a huge mistake. Every time I lie down at night with the lights off, I think of that day. The scars I see on my face in the mirror, don’t think that they were nothing or belong in the past. I can never forget that day. The day when my blood fell in drops like rain and I crouched on the floor crying.”

The identity of the person, whom Chibin referred to only as hyung [the term by which younger males address older males, usually indicative of a close relationship], was not revealed in the post. 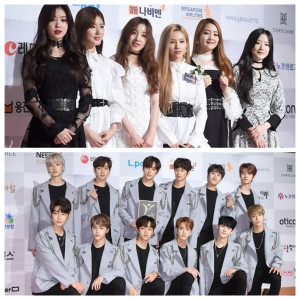 The Brand of the Year awards has announced its winners for this year!

On the afternoon of July 24, an awards ceremony for the 2018 Brand of the Year Awards was held at the Grand Hyatt Seoul. This is the 16th year that the ceremony has been held, with the awards recognizing brands that have been brightening up the year. The Brand of the Year Awards are organized by the Korean Consumer Forum and are determined by online votes, which were held this year from May 30 to June 13.

sorry for the late update, lol, i'm on vacay right now :P looks like they are releasing the teasers two at a time!