On October 5th, the solo singer took to her Instagram and updated fans that she has eventually decided to part with WM Entertainment. She also said that she will now promote as Cha Yoonji, instead of her stage name, I. She left WM Entertainment after her older brother, Baro, left the agency earlier in July this year.

The song is entirely in English. His album drops on the 19th.

( dance practice starts @ the 1:23 mark! )
( Collapse )
previous FROM.9 posts:
prologue video | teaser pics
the “dkdk” one is so fun and they're so loud!!! i never get sick of the choreo for it, one of my fave gg ones of this year 💞 i'm so happy they released the ones with gyuri (and that they're re-releasing the tracks with gyuri's vocals on the mix)
could we get a fromis_9 tag, mods? TT
SOURCE(s): official fromis_9@youtube (dkdk | 22 century girl)

The criticism against Goo Hara’s former boyfriend “C” is increasing after Dispatch released a report that “C” blackmailed Goo Hara with their sex tape.

Previously, the debate was over whether the assault was done by both parties or one. However, the case developed from an assault case into a blackmail and sexual violence case.

It looks like an action drama trailer
He looks good but what is this ?????? 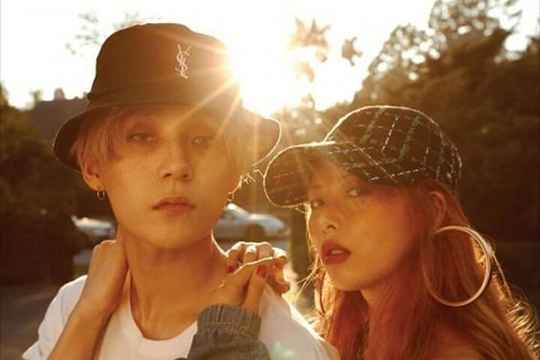 On October 5, news outlet Ilgan Sports released a report stating that HyunA and E’Dawn will be leaving Cube Entertainment.

According to a source, HyunA is in the process of parting with the agency. HyunA is reportedly wrapping up her exclusive contract due to being unable to fix the conflict that resulted from the company notifying her about her removal without any discussion. The report claims that HyunA and Cube Entertainment are organizing cases of renewed advertisement contracts and balancing accounts. 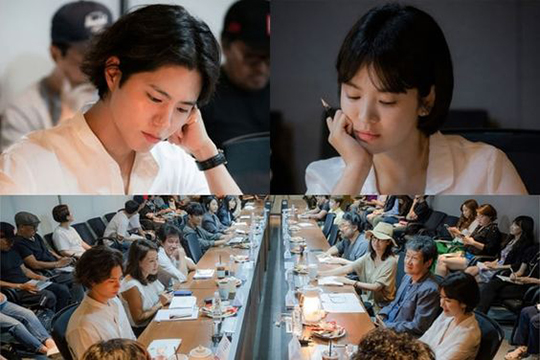 The new tvN drama “Encounter” (formerly known as “Boyfriend”) will tell the love story of Cha Soo Hyun (played by Song Hye Kyo), the unhappy daughter of a prominent politician and ex-wife of the heir to a wealthy conglomerate, and Kim Jin Hyuk (played by Park Bo Gum), an ordinary, innocent young man that she happens to meet. Unlike Cha Soo Hyun, who has never been truly able to lead a life of her own, the free-spirited Kim Jin Hyuk knows how to find happiness in the small things.

The newly released photos show the drama’s cast attending their first script reading, which took place in the Sangam neighborhood of Seoul in August. According to those present, Song Hye Kyo used a calm, composed tone of voice to portray the poised and well-heeled Cha Soo Hyun, and she imbued each and every line of her dialogue with natural, realistic emotion.

Leeteuk thought he was DMing Yeonwoo but it ended up being a fan account. He wrote, "Yeonwoo-ya", to which the fan replied, "OMG I can't believe".

Leeteuk later clarified in an official statement, "I wanted to tell a hard-working junior singer that she was doing great. I'm so sorry about that, Yeonwoo-ya, and sorry to the fan who was probably surprised by my sudden DM."
( Collapse )
There has been no statement from Yeonwoo's side, so she most likely remains unbothered

Omona, have you ever try to holler at someone 13 years younger than you under the guise of a supportive work relationship with someone whose contact info you don't even have in the first place?

Source: Naver and Nate via Netizenbuzz and Asia TodayGif from Minchins tumblr

this is....something alright. marks section is weirding me out the most


It's so beautiful! So in love with this song and they sound great singing this live acoustic version.

so much better than the original MV

Every week I search the past charts for this day and post the top three songs. Then I pick out two more from the top ten as honorable mentions. We’re getting into the songs that are popular in the fall and winter. Lots of ballads on the charts coming up in the coming months. This week, let’s see what was on top for the 1st week of October, 2010.


#3 2NE1 “Go Away”
I think I’ve only seen the MV once before, I vaguely remember all the car racing. Don’t remember the guy being such a violent scumbag though. Did he like, die at the end? And Dara just sashay awaying from the fiery crash like it’s nothing is so lol. Red hair Park Bom is always the best Park Bom hair. 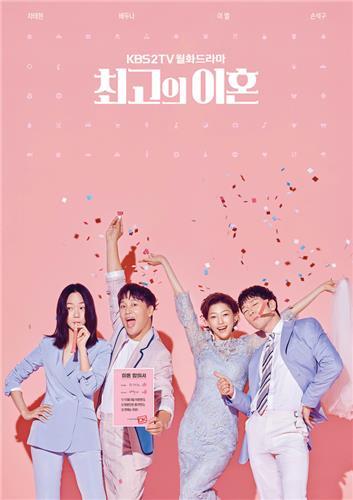 "The Best Divorce" sounds ironic in itself as the two words are incompatible, like water and oil. Generally, couples resort to divorce in the most unfortunate, worst circumstances.

The new KBS 2TV's series, also known as "Matrimonial Chaos," seeks to delve into the delicate, complicated relationships of married couples, and ruminates on the commonly-asked question, "Is marriage the completion of love?"

What happens when an attempt to salvage an unhappy marriage, which one has entered into in pursuit of happiness, only creates more misery?

( Collapse )
Sources; @Stray_Kids
The comeback is on October 22nd and they're having a showcase on October 21st at Olympic Hall in Seoul.

First post on Omona. (Hopefully I did the cut right this time!)
I'm happy about the comeback, but would of been ok with them coming back next year since they just had a comeback in August.


Lucky number 7! Dem throphy emojis taking up a lot of space in the title now, they're just sweeping up these awards!

wasn't this man supposed to enlist 2 months ago?? not that I'm complaining
Collapse