[Pann] THE REASON WHY MAMAMOO WHEEIN TELLING "STRAWBERRY JAM, COME OUT" TO SOLAR IS SHOCKING

This was posted on Pann a while ago. Recently, netizens brought it up again.

Directing television's new John Le Carré adaptation, The Little Drummer Girl, was always going to be a challenge as the BBC strives to repeat the success of The Night Manager.

But for Park Chan-wook, there was an added hurdle: directing the cast and crew without speaking any English.

The South Korean auteur relied on an interpreter to convey his vision for the six-part drama, which begins next Sunday on BBC One. Set in the 1970s, it stars Florence Pugh as a young actress recruited by Mossad to infiltrate the PLO.

The result, according to the cast, was a resounding success, with all agreeing that the language barrier was swiftly overcome.

“Park Chan-wook doesn’t speak English, although I think he understands more than he lets on," said Charles Dance, who plays a British intelligence officer. "Having a director from a totally different culture is a great idea and the fact that he doesn’t speak English is not a hindrance at all. He has a wonderful eye.”

OP's note: Although I liked Stoker, it didn't come near The Vengeance Trilogy for me.
I'm very excited about this new project though.

On a similar note (kinda), is anyone watching Ms. Ma, Nemesis

Reddit user BanterMasterGid compiled a bunch of numbers from groups and solo-ists across all three companies and broke them down in graph form. It's a combination of korean and japanese releases. the totals aren't as interesting as seeing the breakdown of artists within the companies themselves.

A thread on a Korean site was posted called ‘BTS who are having a controversy in Japan right now’. The thread maker brought up a t-shirt Jimin wore last year, the shirt commemorated National Liberation Day (August 15th, liberation from Japan’s colonial rule) so it has the print of the mushroom cloud from the atomic bomb and Korean people cheering with their hands up for Liberation Day. 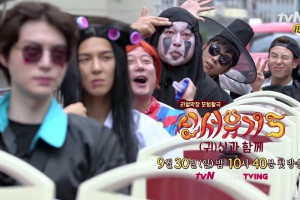 How are we feeling about the new season so far?


Next one is pajamas!

only a few more days!
Collapse