(x)
Sujeong is stunning in this MV omg. Good song, similar to Lost n Found. Loved the back and white outfits and little references to earlier MVs!

This is a lovely song but the real standout from this album for me is "Designer". Thoughts?

Close to You could have easily been a title track. Sweet Love sounds a little different from what they usually do, I hope we get performances of it!

Australia's SBS PopAsia chatted with famous K-pop choreographer Kasper about creating classic dances for EXO, his K-pop friendships, and which idols have impressed him the most while working together.

You may recognize him as a dancer in various performances and MVs of SM idols. My favorite appearance of his is the couple dance with Taeyeon on her "Why" MV.

(G)I-DLE will be debuting Japan this summer!

On May 20, Cube Entertainment confirmed that (G)I-DLE will make their official debut in Japan on July 31 with their debut mini album “LATATA.” First, the group will perform a debut showcase in Tokyo on July 23, where they’ll be meeting their Japanese fans.


Omg ok I'm very surprised BUT IN A GOOD WAY WOW  [the MV is...]I mean the MV is underwhelming but the song is better than my expectations I had none tbh so I'm relieved lol

ALSO THE ALBUM IS SO GOOD, it's their most coherent, freshest and catchiest album to date, please give it a listen omona 🔥🔥🔥

For full lyrics to the songs, check this post

# [News] Zenith Media has deleted the announcement of LipBubble's disbandment from their Daum Café.

Why and what it means, we don't know. https://t.co/bH9lNtPEAx 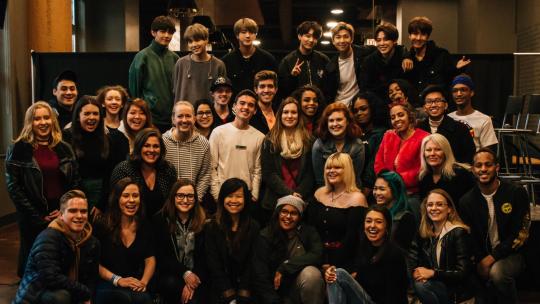 "When we think of painting, artists just describe how it looks. As time passed, Picasso came and started to express image and feeling. And now with social media, we can communicate through the painting. We can think of the image, talk to it and ask questions." -RM of BTS
While the ecstatic, eager crowds gathered in hungry anticipation around Soldier Field prior to BTS' second night in Chicago, there was a serene, enchanting aura inside the pop sensations' forum with GRAMMY U Chicago students at a SoundChecks event on Sunday, May 12.

The afternoon began with the students getting a bird's eye view of BTS' soundcheck, looking down as the Korean septet performed two songs for the sea of about 2,000 members of the ARMY (as fans of the group are known). Though the fans toting hand-painted signs and wearing bedazzled cat ears at the front of the stage screamed for joy at every evocative dance move and flutter of confetti, the GRAMMY U students took in the big picture, learning how such a big show is produced.

When BTS and the students were ushered into a private room not long later, the group shared details on all of the hard work that goes into making a performance seem so effortless. "BTS never sleeps," RM told the Recording Academy prior to their Windy City event. “We work around the clock, and technology has developed that allows us to collaborate with people around the world."

👗 Rounds will be open for a little over 48 hours (end on wednesday night).

( Collapse )
Don't forget to vote for the Female soloist