I don't like it as much as I liked Valkyrie but it's a solid one! The MV looks gorgeous and I like the choreography. Can't wait to listen to the rest of the album!

hayoung and jiwon participated in writing and composing 'fly high'!

"Abyss" is now streaming on Netflix 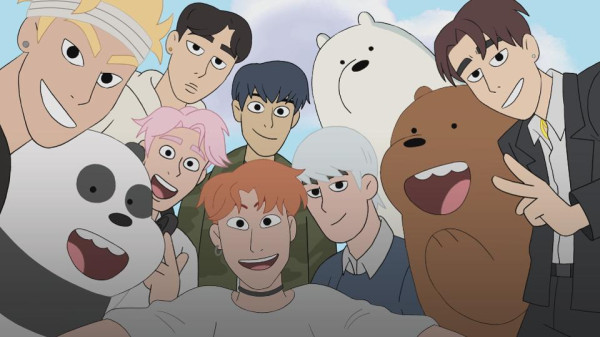 On Monday (May 27), K-pop group Monsta X got the Cartoon Network treatment when all seven members of the group were featured in the latest episode of the animated series We Bare Bears. Through an episode that put the focus on fandom behavior and highlighted the bond between Monsta X and their Monbebe following, We Bare Bears became the latest, and most successful, cartoon television show to incorporate K-pop into an episode.

The forward-thinking brainchild of Daniel Chong, the series began airing in 2015 and has regularly incorporated Korean culture into its plotlines, and features multiple characters that speak the language; an early short featured one character performing K-pop-inspired choreography. The idea of an entire episode inspired by K-pop was something that the We Bare Bears team had wanted to do for a while, and so “Panda’s Birthday,” where the titular Panda Bear tries to meet his favorite K-pop band Monsta X while they’re in town, was born.

I'm still not over it, it's all so damn cute lol.

Source: Naver and MalayMail via Soompi

Source: XportsNews and Billboard via Soompi