The prosecution has concluded that they cannot charge Yang Hyun Suk with mediating prostitution.

Previously, Seoul Metropolitan Police Agency’s Provincial Special Detective Division revealed plans to forward a recommendation of non-indictment for Yang Hyun Suk regarding suspicions of mediating prostitution. After the search and seizure investigation of YG Entertainment’s financial accounts, police sources revealed that while they found money transfers, there was not enough evidence to prove the prostitution mediation suspicions. Furthermore, although there was evidence that confirmed Yang Hyun Suk met with investors from Southeast Asia, there was no evidence that was directly connected to prostitution.

According to legal sources on November 25, the Division of Crimes Against Women & Children of the Seoul Central District Prosecutors’ Office suspended the indictment of Yang Hyuk Suk on September 30 regarding the suspicion of mediating prostitution.

Does anyone know anything about her? I Googled and found her Angelfire(!!!) page that her parents set up when she was born. Here's her YouTube page where she posts covers.

JTBC has recently signed a contract with Netflix to supply dramas!

Through the deal, JTBC will supply Netflix with over 20 dramas for three years starting in the first half of 2020

A growing number of companies are seeking to ride on the popularity of Pengsoo, an outspoken penguin character going viral online, according to industry officials, Friday.

They said companies are striving to use the character for commecials, collaborative goods and other types of ads as consumers are buying all Pengsoo goods in sight.


He's got almost 1 million YT subscribers. I don't know how to tag this lol, sorry.

The upcoming 2019 Mnet Asian Music Awards (MAMA) are taking another heavy blow as an ongoing police probe over the music channel's idol survival shows is eating into its lineup.

Earlier this week, police took into custody the director and chief producer of Mnet's high-profile audition show, "Produce 101," on charges that they fixed the final vote result of the show's latest fourth season.

The police said they have also booked at least one ranking official at the channel's operator and entertainment giant CJ ENM while broadening its investigation into the program's previous three seasons as well as other audition shows by Mnet.


Heejoon takes Jam Jam to the recording studio. Jam Jam goes on her first errand. How cute and smart is Jam Jam? We also get to hear Soyul sing again. William and Bentley are still in Melbourne, and their Nana makes them special Halloween treats. Sam wants to relieve his childhood with the boys, and William plays a trick on him. Then they have a picnic, and visit the zoo. Ben with the kangaroos was so cute! Jooho sets up a gym in Gunhoo’s room. Then he takes the kids to the park. He seriously must have a Google alert for anything trendy. He only takes the kids to the “hot place” lol. They also visit a zoo and then take pics in pink grass. I’ve never seen that kind of grass before. So pretty!

Fresh off the heels of hit songs featuring Red Velvet’s Irene and EXO’s Chen, Raiden shares with us his story of becoming a DJ, playing the opening ceremony of the 2018 Olympics with Martin Garrix, and the prejudice, racism and difficulties he encountered in his life as a producer, musician and touring DJ. Cheers to Raiden and To What’s Next for his inspirational story to all of you aspiring musicians.

As the night deepens, the rain starts to pour and the members share what's really on their minds, for the past years they have spent together.

From inescapable hits that crossed all borders to cult favorites of the indie world, here’s our list of the 100 best #Kpop songs of the 2010s 🎶 https://t.co/axGNulkPEN

mods, I hope it's okay that I chose not to post the whole thing - it was too damn long. But I did add the videos for the top 20 hoping this might be a nice way for some of us to remember some good things about 2010s Kpop. The whole list doesn't always make sense to me but it also has some of my favourite kpop songs ever. I'm pretty sure it's missing a lot of them but I haven't had the time to find which ones yet so I'm mostly fine with it for now! Most especially, I'm very very satisfied with #14, #11, #10, #7 and #3 tbh. #1 is a whole anthem and I love it. #8 on the other hand...

Source: VLENDING
I really like the song, it's very chill but it's also very sad.
If anyone is interested in the lyrics, here's a video with them. 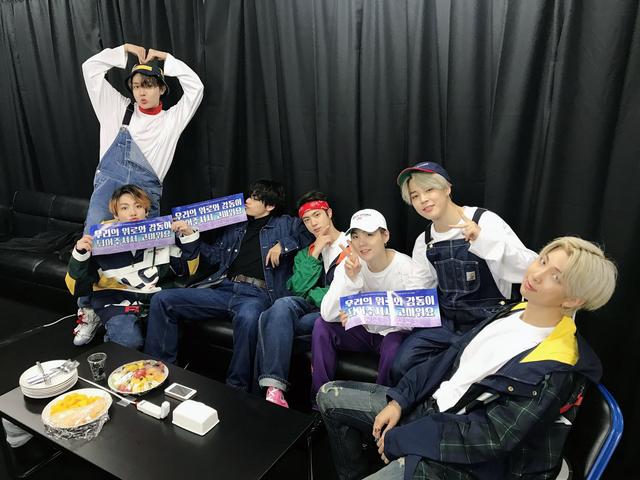 BTS has won big at this year’s American Music Awards!

The ceremony for the 2019 American Music Awards was held on November 24 (local time) in Los Angeles, California. Although BTS was not present, they were announced as the winner of Favorite Duo or Group — Pop/Rock, Tour of the Year, and Favorite Social Artist.

Congratulations boys! I'm glad they took home the Tour of the year one. It was well deserved. I've seen all of the 4 concerts they did in Paris for this tour and I had a blast. Not sure I'll ever get a chance to ever see them again if they push forward with the whole lottery system they've used for the 5th muster/Seoul concerts.
Collapse