Fancam under the cut!

As of 1:30 p.m. KST on January 28, IU’s new single “Celebrity” has achieved a certified all-kill. The song was released on January 27 as a pre-release track for her upcoming full album, and it has been sweeping major domestic realtime music charts.
( Collapse )

Young Asian women were the main consumers of Korean wave products in 2020, according to a survey conducted by the Ministry of Culture, Sports and Tourism in collaboration with the Korean Foundation for International Culture Exchange, Thursday.

The annual report showed that Asian women in their 20s and 30s were the "biggest spenders" on Korean cultural products last year.

"The main hallyu consumers were Asian women between the ages of 29 and 31, and the results showed that women spent more than men on dramas, variety shows, films, books, beauty products and food. Men only outnumbered women in games," the ministry said in a statement.

The report was compiled based on a survey of 8,500 hallyu (Korean wave) consumers across 18 countries, including China, Japan, the U.S., Australia, the U.A.E. and Brazil. It was conducted last year in the form of an online survey between September and November.

Actor Park Eun-seok, a star in popular TV series "The Penthouse: War in Life," has apologized after being criticized for abandoning his pet dog.

"It is my fault that I failed to take charge of a living animal for its whole life ― I admit I am wrong and have been reflecting upon my action," Park, 36, wrote on Instagram Wednesday. "I don't want to make any excuses. I am the one who has to change so other people may realize the seriousness of the issue."

The statement comes after he denied allegations that he had abandoned the dog as well as other furry companions. 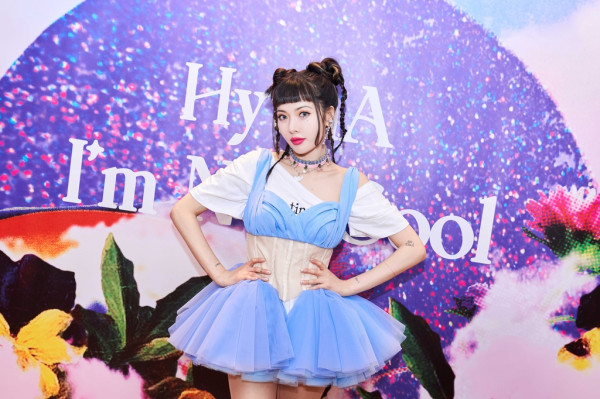 K-pop songstress HyunA, known for her bold and powerful performances, said her new EP "I'm Not Cool" is a diary of her life that contains feelings and stories of her life on and off stage.

"For this album, I put in a lot of stories I had jotted down on my mobile phone's memo feature," the singer-songwriter said in a press conference streamed online. "There are stories that date back three years and those that go back two years. I wanted (fans) to feel as if they are reading my secret diary, so I made an album based on these stories."

On January 29, aespa officially announced their plans to release a remake of Yoo Young Jin’s 2000 song “Forever” next week. The single will drop online on February 5 at 6 p.m. KST.

As a mid-tempo ballad with an acoustic guitar sound and warm lyrics about promising forever to a loved one, “Forever” will showcase an entirely different side of aespa from their powerful debut track “Black Mamba.” Yoo Young Jin, who first released “Forever” as part of SM Entertainment’s holiday album “Winter Vacation in SMTOWN.com” back in 2000, is said to have personally rearranged the song for the girl group.

The song they will be covering under the cut:

some misc GOT7-related stuff heard on the grapevine:
( Collapse )


Sorry I'm only posting now, I have no concept of time nowadays lol. Some of these tweets have been sitting in my bookmarks for ages it seems.

I guess now what's left is JB and Bambam updates? Is that right?

wtf the full MV version is on the app only, no thanks I'll just watch ripped versions on YouTube. also, have you voted for Eunbi for Omona's Sexiest Woman?

both Yoona and Taeyeon recommended Lips, superiority of their Japanese discography confirmed

#1 SO BAD First Week Behind the Scenes

these are the ones i should've been posting instead of the pajama party things, lol. CC for english subs! ♥
Collapse