The rampant growth of illegal scanlation of web comics overseas is causing growing financial and psychological damage to Korean creators. Scanlation, a portmanteau of "scan"' and "translation," is a fan-fueled online posting of translated comics without the consent of the copyright holder.

Over 1,300 scanlation aggregate websites are active in more than 30 countries, according to a Korean Foundation for International Cultural Exchange (KOFICE) report. They host unlicensed and amateur translations of web comics from Korea and other countries in over 40 languages and yielded 334.8 billion page views in 2020 alone.

Illegal scanlation is a universal issue for Korean web comic creators. "Almost every single webtoon made in Korea is illegally scanlated and shared online. It is every webtoon creator's frustration," says Kim Dong-hoon, the head of the Korean Webtoon Creator Union.

The driving force behind these pet translation projects, according to Ggang-e, a webtoon artist from Lezhin Comics, is young avid comic readers of various nationalities. They form translation groups, collaborate via the internet, and claim that Korean artists "should be flattered" for the hard work of global promotion they offer for free.

Play M said that the alleged perpetrator has been harassing the singer for more than a year since last March.

"Via the law firm Wooree, we filed a complaint against the alleged stalker to accuse him of violating the laws concerning minor offenses, among others," the company said in a statement. "Although we asked him multiple times to stay away from our artist, he did not stop stalking her and even came to her home (without permission). Given the fact that he has been inflicting severe damage on our star, we decided to take stringent legal action."

Under existing Korean law, stalking is categorized as a misdemeanor, so most stalkers are only punished with fines of up to 100,000 ($88), even if they are found guilty. But under a new law that will go into effect on Oct. 21, stalkers may face more severe punishment ― up to three years in jail or 30 million ($25,639) won in fines.

They come on at around 33 minutes in 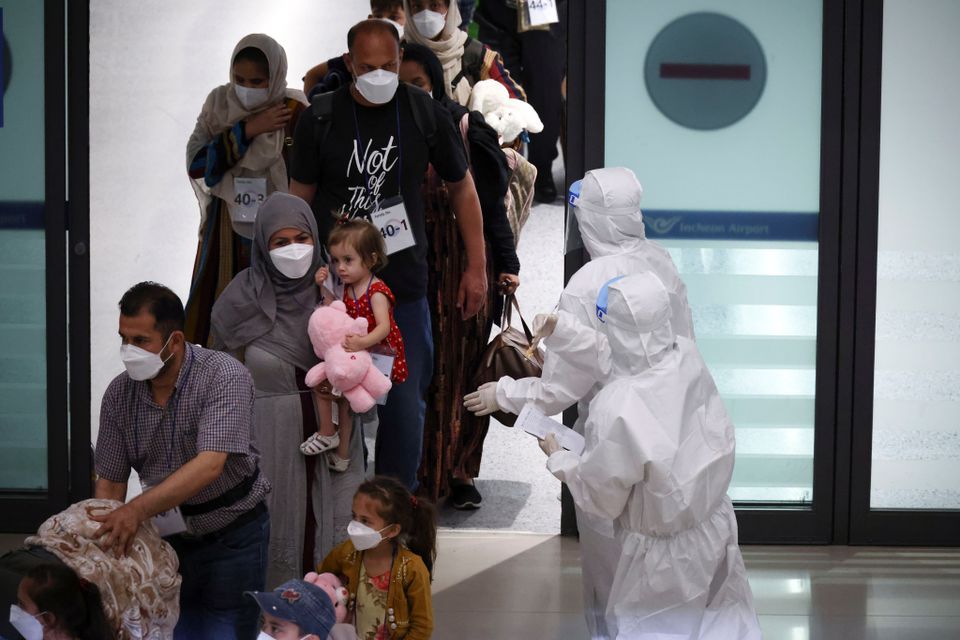 SEOUL, Aug 26 (Reuters) - Nearly 400 evacuated Afghans arrived on Thursday in Seoul, where the government said it was amending the law to allow long-term stays for those who worked on South Korean projects in Afghanistan before the Taliban seized power this month.

Immigration is a contentious issue in South Korea, where many pride themselves on ethnic homogeneity, even as the population of 52 million ages rapidly and the labour force dwindles.

At least two flights were to bring in 391 people, including the families of workers at the Korean embassy, the Korea International Cooperation Agency (KOICA), a hospital and Korean government-run vocational training institute and military bases.

Ok I’m ready for an official Yoohyeon solo!!! She killed it. Even if you’re not a DC fan it’s worth a watch as it’s better than most covers posted here tbh.

Minhyuk continued, “After that, a lot of our members came on the show and Eunkwang, Changsub, and Hyunsik all received a lot of love on the show. We were even able to get No. 1 on the music charts for the first time. This is a show that we’re all very grateful for.”

Minhyuk also revealed that he had directly arranged the song he performed on this episode and said, “I’m always working on writing and producing songs for the group. I want to let more people know about that side of me, so I took on that challenge today.”

The rapper and singer concluded, “BTOB is approaching our tenth anniversary. This is something that a lot of teams say, but we really want to be a long-running team like Shinhwa or the recently returned 2PM. My dream is to keep making music as BTOB as well as working hard on my solo career and putting my name out there.” 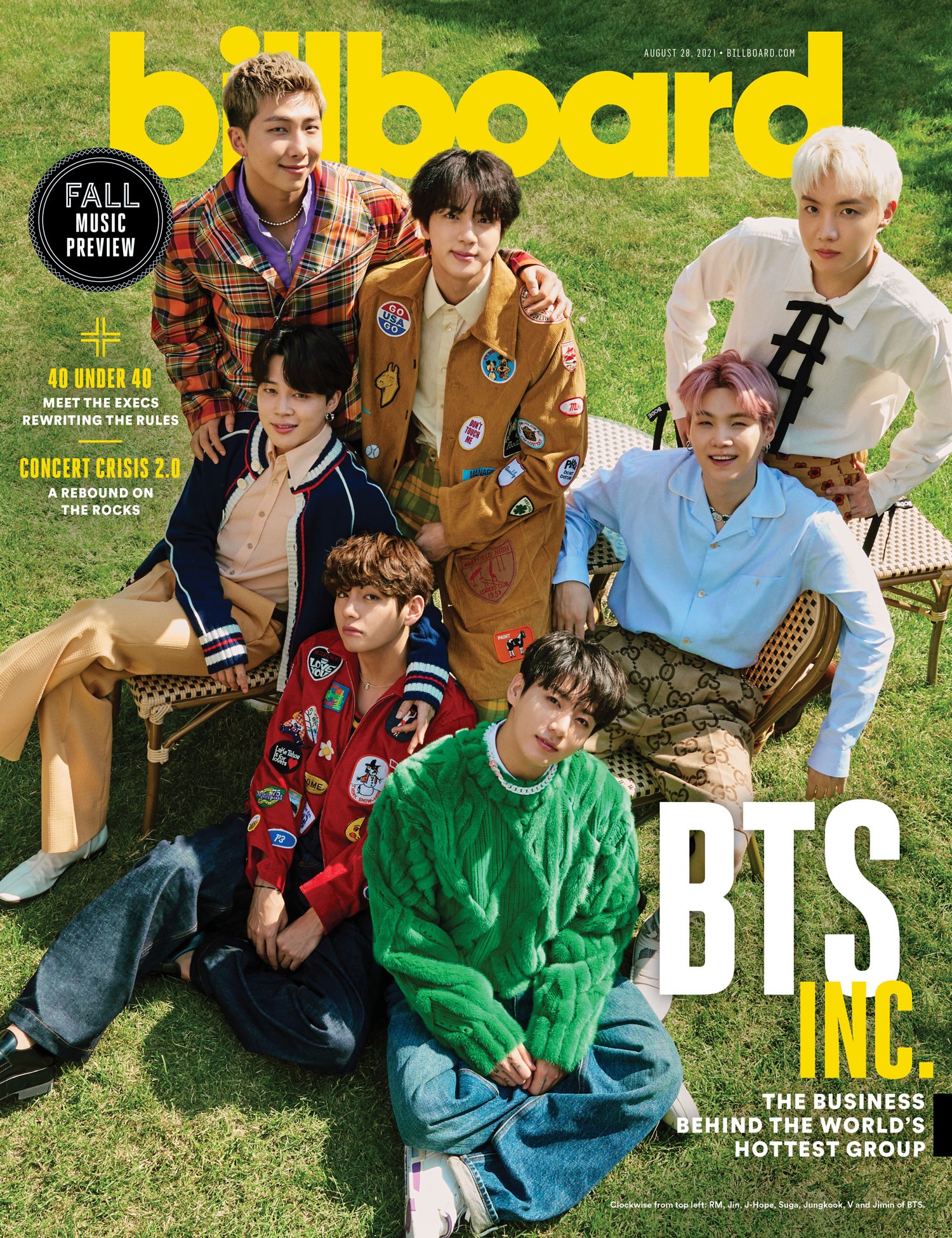 BTS is in the August issue of billboard magazine. A limited-edition box (7,500 units) is avaible for $175 with the 8 different covers. The ARMY Hungers Games have begun! May the gods of questionable fashion be with them!
You can read the article that already pushed Twitter ARMY into a nervous breakdown here.

They look like old British grandmas, so many prints, so much green! J-hope's pants and shirt are so cute (I wouldn't wear both at the same time though)

CJ Group is seeing visible progress in its bid to acquire management rights in SM Entertainment, as the group's top executive was said to have been persuading SM's founder to hand over his stake.

SM Entertainment, the country's top talent agency, is looking to unload 20 percent of its share including 18.72 percent owned by its founder, whose personal name Soo-man makes the initials SM in the entertainment company's name. Whoever purchases it ― now that only CJ Group and Kakao are competing against one another ― will become the largest shareholder of SM Entertainment.

Chances are high as CJ is desperate not to lose SM Entertainment to Kakao in its bidding.

The first accuser, the only Korean one out of the three (so far), has revealed more details about their relationship.

Do you memorize the same lines when flirting? You seem like a serial criminal because I heard the exact same lines that the Chinese fan heard from you. ‘I only read your letters,’ ‘I don’t read other fan letters,’ ‘I am good at reading people, and you seem like a nice girl,’ ‘You are the first fan that I have contacted so please keep it a secret.’
( Collapse )
Sources: @ooooshiiim, translated by Koreaboo

mods, I'm sorry for using Koreaboo but it was the only place where I could find the full translation. Please accept this post, I did everything on mobile and my thumb is about to fall off 😭

Sorry mods, I’m submitting this on my phone so if the formatting is a mess that’s why, lol.