#Yiren of girl group #Everglow will temporarily halt her activities and return to her family in China, according to #YueHua Entertainment on Monday.https://t.co/qLQcniPrCg 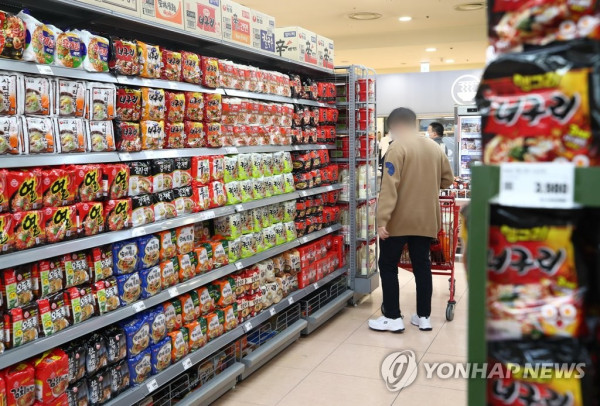 South Korea's exports of instant noodles reached an all-time high in the first 11 months of 2021 on their global popularity amid the coronavirus pandemic, data showed Monday.

Asia's fourth-largest economy exported US$607.9 million worth of instant noodles, or "ramyeon" in Korean, in the January-November period, up 10.6 percent from the same period of 2020, according to the data from the Korea Customs Service and industry sources.

Last year's bumper record was attributed to the global popularity of Korean-made instant noodles as an emergency food in the wake of the coronavirus outbreak that forced people to stay home.

Also responsible were strong overseas shipments of "chapaguri," a signature noodle dish from the Oscar-winning film "Parasite," according to the sources.

China was the largest overseas market for South Korean instant noodles in the 11-month period, with exports reaching $133.42 million. The United States came next with $70.76 million, followed by Japan with $58.77 million, Taiwan with $29.18 million and the Philippines with $25.96 million.


Had a craving and bought three packs and five cups of noodles just yesterday.

Korea’s new policy requiring people to be completely vaccinated or cleared in tests to enter public places is stirring up a wave of protests and court challenges.

On Saturday civic groups and local community organizations marched from Seoul Station to Gwanghwamun Square demanding that the compulsory vaccine-or-testing policy be scrapped. The Saturday rally, among the firsts of many that is being planned, follows a series of legal battles facing the government over the mandate, with one reaching the Constitutional Court last month.

Last week, a Seoul court temporarily blocked the use of vaccine passes at educational facilities, citing potential infringements of constitutional rights to education and other freedoms. This marks the first time in the past two years that the judiciary has put a brake on the government’s COVID-19 rules.

In other places, including cafes, restaurants and libraries, the mandate remains in full force while they await a verdict from the court, expected to be given in two to three weeks.

Happy monday my fellow omonians! To celebrate the new year, let’s test out something new:
Last Week on Omona! This is a highlight roundup of last week’s posts that doubles as a discussion post à la ONTD’s semi-daily roundup.

Yay, it’s my first post! What do you think of this type of roundup, Omona? Feedback is highly appreciated.
What was YOUR k-entertainment highlight of last week? Discuss!

the girls—minus leeseo—go "camping" in this episode! (the term "camping" is used loosely since they're in a house lol)
Collapse