How BTS Is Taking Over the World 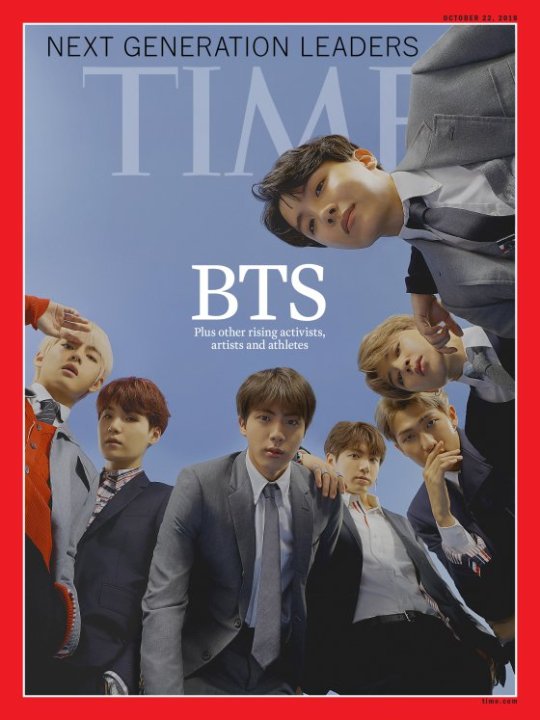 Like The Beatles and One Direction before them, BTS serves up a mania-inducing mix of heartthrob good looks and ear-worm choruses, alongside dance moves in the vein of New Kids on the Block and *NSYNC. But the band—whose name stands for Bangtan Sonyeondan in Korean and Beyond the Scene in English—is also breaking new ground. Not only is BTS the first Korean act to sell out a U.S. stadium (to say nothing of the records they’ve set across Asia), but they’ve done so without catering to Western audiences. Only one of their members, RM, speaks fluent English, and most of their songs are in Korean—even more proof that music “doesn’t have to be English to be a global phenomenon,” says Steve Aoki, a U.S. DJ who has collaborated with BTS. The group is also preternaturally adept at leveraging social media, both to promote their music and connect with their fans.

But for now, at least, they may need sleep. “I’m still trying to get over my jet lag,” deadpans Suga, one of the group’s three rappers.

Since its genesis in the ‘90s, Korean pop—or K-pop—has become synonymous with what studios call “idols”: a cadre of young, polished, perfect-seeming pop stars whose images are often rigorously controlled. (They’re often discouraged from discussing their dating lives, so as to seem available to fans.) But even as K-pop matured to a nearly $5 billion industry with fans around the world, its biggest stars—including Rain, Girls’ Generation and Big Bang—largely failed to gain traction in Western markets. The outlier was Psy, a South Korean rapper whose “Gangnam Style” became a viral hit in 2012, though his comic, outlandish persona was an unlikely (and some critics argue, problematic) herald for the genre.

When BTS arrived in 2013, it was clear they would play by new rules. They were formed by Bang Si-hyuk, a K-pop renegade who left a major label to start his own enterprise. He chose young stars that appeared to have an edge, beginning with RM, who was initially a part of Korea’s underground rap scene. And although BTS has idol elements—the slick aesthetics, the sharp choreography, the fun-loving singles—they also embrace their flaws. Their first release, “No More Dream,” took on the ways Korean kids feel stymied by societal expectations; RM recorded a song with Wale that alludes to the importance of activism; Suga released a mixtape addressing his depression. “We started to tell the stories that people wanted to hear and were ready to hear, stories that other people could not or would not tell,” Suga says. “We said what other people were feeling—like pain, anxieties and worries.” They convey these messages in their music videos, loaded with metaphors and cultural references; in their social media updates; and in the lyrics of their music, which fans translate and analyze on message boards, group chats and podcasts. “That was our goal, to create this empathy that people can relate to,” Suga continues.

It helps, too, that their sound is broadly appealing, fusing hip-hop with EDM and pop production. Recent collaborators include Desiigner and Nicki Minaj, who added a verse to their latest single “Idol,” whose lyrics wink at their place in the K-pop firmament. “You can call me artist, you can call me idol,” they sing. “No matter what you call me, I don’t care… you can’t stop me lovin’ myself.” RM says that mantra—love yourself—is core to BTS’ identity; it’s even incorporated into their most recent album titles. “Life has many unpredictable issues, problems, dilemmas,” says RM. “But I think the most important thing to live well is to be yourself. We’re still trying to be us.”

This combination of traits has resonated with fans, especially on social media, where BTS has amassed millions of devoted followers. They call themselves ARMY, which is both an acronym for Adorable Representative M.C. for Youth and a nod to their organized power. In 2017, BTS fans made headlines for lifting the group to the top of Billboard’s Social Artist chart—which incorporates streams, social-media mentions and more—and besting the likes of Justin Bieber and Selena Gomez. Since then, the ARMY has catapulted both of BTS’s latest albums, Love Yourself: Answer and Love Yourself: Tear, to the top of album charts in the U.S., South Korea and Japan. “Even if there is a language barrier, once the music starts, people react pretty much the same wherever we go,” says Suga. “It feels like the music really brings us together.” Adds Jimin: “We give energy to our audience members and listeners, but we also draw energy from them.”

Back at the Ritz, a makeup artist wakes Jimin from his nap. Nearby, V sings a bar of music as his bleach-blond hair gets blown out. Jung Kook stretches his neck as a makeup artist applies concealer. RM chats with a manager. Suga slips into loafers. Jin, who goes by the fan-given moniker of “Worldwide Handsome,” lets a wardrobe assistant tie his necktie. J-Hope’s laughter filters through the door.

It’s a rare moment of downtime for the boys. Over the coming weeks, they will perform another 11 sold-out shows, appear on Good Morning America and even help launch a youth empowerment initiative at the U.N. General Assembly in New York City, at which RM spoke about self-acceptance: “No matter who you are or where you’re from, your skin color, your gender identity, speak yourself.”

A schedule like this might seem daunting. But for BTS—and their ARMY—it’s an encouraging sign of what’s to come. “I’m just throwing it out there,” Suga says, “but maybe we could perform at the Super Bowl someday.”


there's a video at the source that i cannot embed for the life of me :c
Tags: bts, interview, overseas activities
Subscribe