Carats were sitting behind IZ*ONE members, so Sakura looked at them when they received some hotdogs and asked if she could take a bite. (trans.) Carats even wanted to give them their whole hotdogs, but IZ*ONE only had a bite. Later, Seventeen's fan manager gave IZ*ONE some hotdogs and Pepsi. 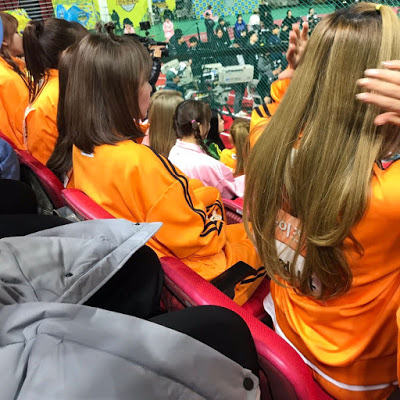 In the stadium, the seats between fans and idols were so close.

'Seventeen's fans got hotdogs, and Kura kept on glancing at us so I let her have a bite of mine. F*ck..ㅋㅋㅋㅋ'

'Sakura-san..ㅜ Had a bite of my hot dog'

'I wanted to give my whole hot dog to herㅠㅠ But she said no and just took a bite of mine.. I was wondering what to do. But in the end, the staffs gave them a new one along with a can of coke.. She enjoyed the hot-dogs with the other members too'

[Some netizen comments]
-Look at the first picture.. She was turning her body to Seventeen's fans who were receiving hotdogs from the staffs. So freaking funnyㅋㅋㅋㅋㅋ

-It's so cute just to imagine how she kept glancing at the hotdogs..ㅋㅋㅋㅋ

-Both the Seventeen's fan and Sakura are so freaking cute..ㅋㅋㅋ

-It's so funny to imagine the fan letting Sakura take a bite of her hotdog..ㅋㅋㅋㅋㅋ

-Just imagine her staring at you with those big eyes of her.. You can't help but let her have yours..ㅋㅋㅋ


There's also another thread that managed to spin this into something negative, if you want to read that, here's the pann-choa entry.

Omona, are you the one asking for a bite or the one sharing your food?