As Avatar Darko is a White rapper with dreadlocs, many fans took to the Instagram comments to voice their frustrations. In the now-disabled comment section, Jay responded to multiple people who accused him and Avatar Darko of cultural appropriation.
(OP Note: Because the comments are now disabled and I am unable to link to them, I will be transcribing them and providing screenshots. I have tried to piece them together in order according to multiple sources)

"Like every time I twist my hair into spikes with gel, y'all say the same shit 'cause y'all THINK it looks like dreads… tbh getting pretty ridiculous… I can't style my hair???" 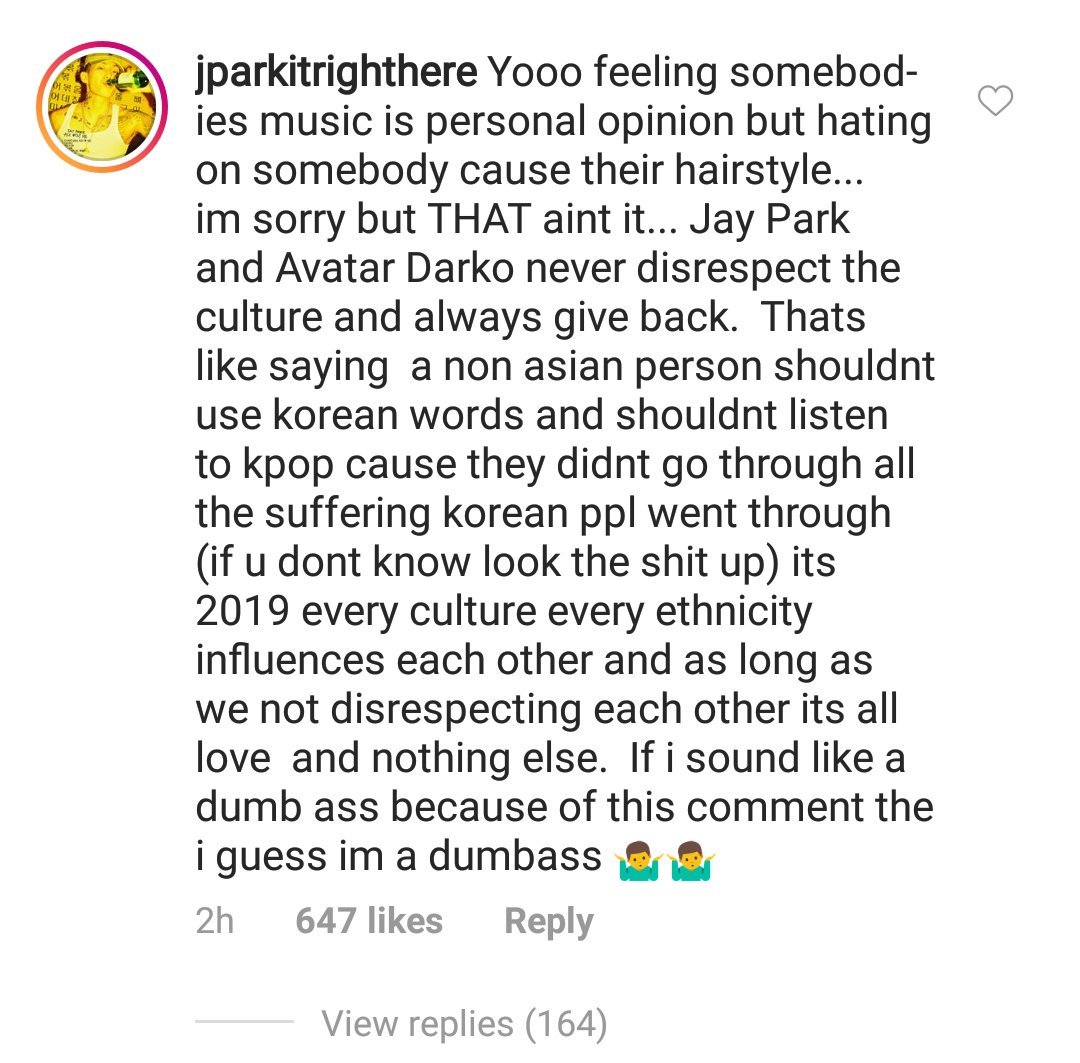 "Yooo feeling somebodies [sic] music is personal opinion but hating on somebody 'cause of their hairstyle… I'm sorry but THAT ain't it. Jay Park and Avatar Darko never disrespect the culture and always give back. That's like saying a non-Asian person shouldn't use Korean words and shouldn't listen to K-pop 'cause they didn't go through all the suffering Korean people went through (if you don't know, look the shit up). It's 2019 and every culture, every ethnicity influences each other and as long as we're not disrespecting each other, it's all love and nothing else. If I sound like a dumbass because of this comment, then I guess I'm dumbass" 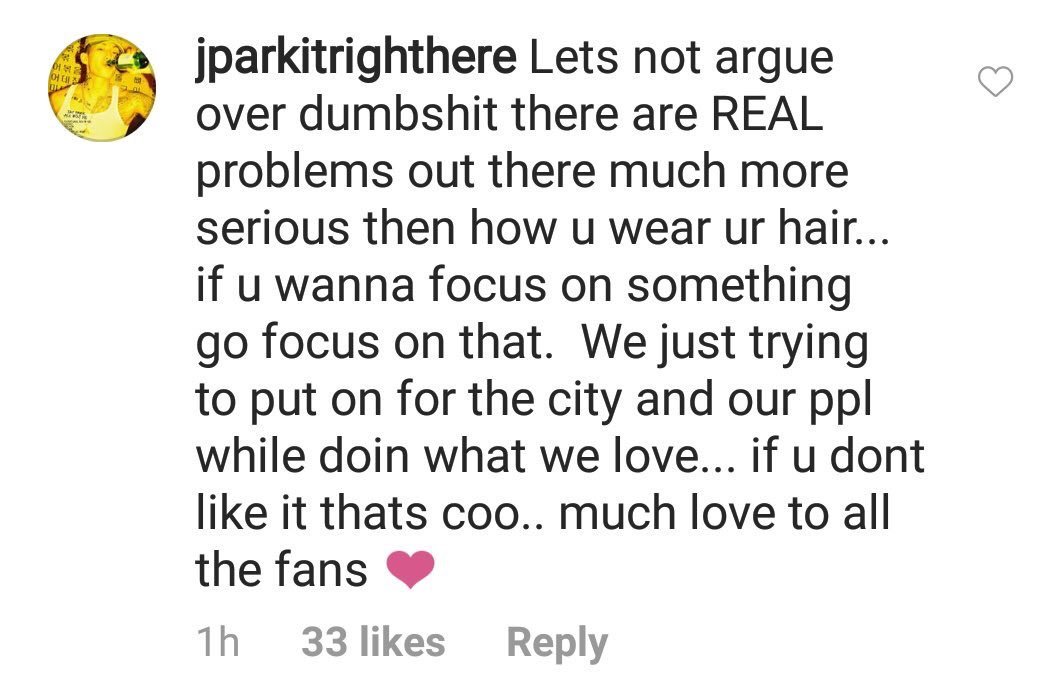 "Let's not argue over dumbshit there are REAL problems out there much more serious then[sic] how u wear ur hair...if you wanna focus on something go focus on that. We just trying to put on for the city and our ppl while doin what we love...if you don't like it that's coo...much love to all the fans"

"Also if we are doing something wrong give valid points and a SOLUTION.. otherwise u just hating and adding to the problem" 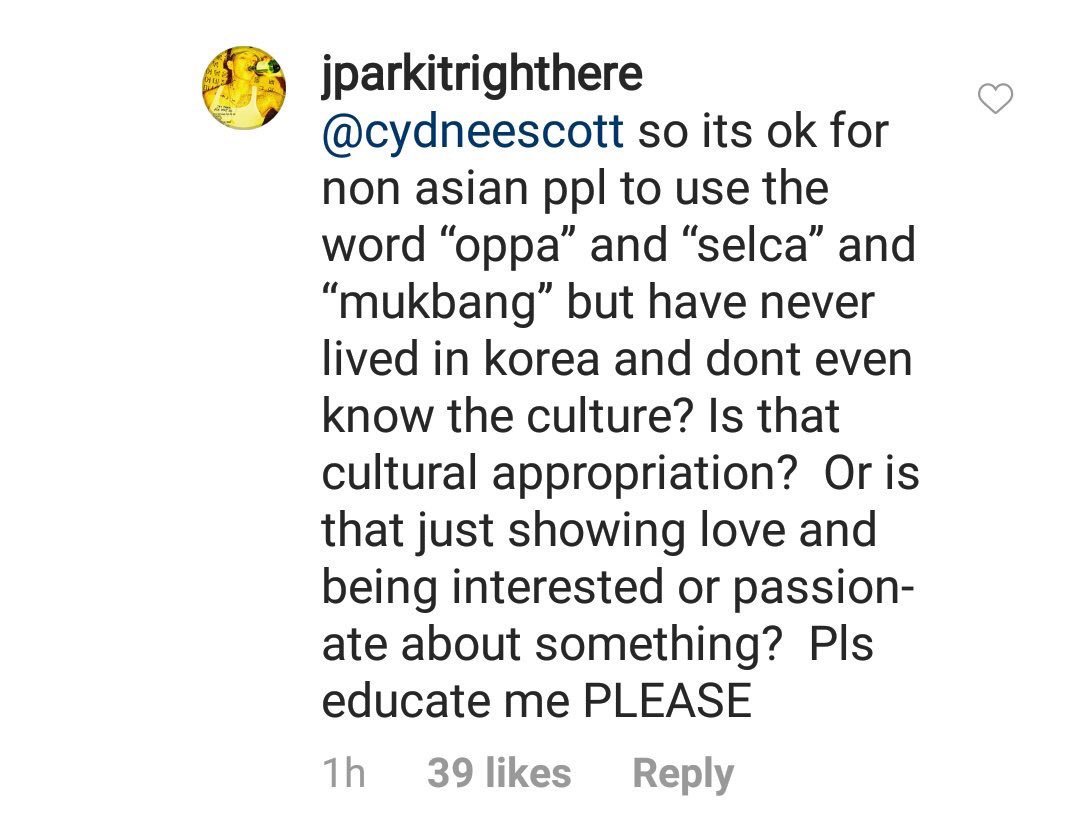 (reply to someone's comment) "so its ok for non asian ppl to use the word "oppa" or "selca" and "mukbang" but have never lived in korea and don't know the culture? Is that cultural appropriation? Or is that just showing love and being interested or passionate about something? Pls educate me PLEASE" 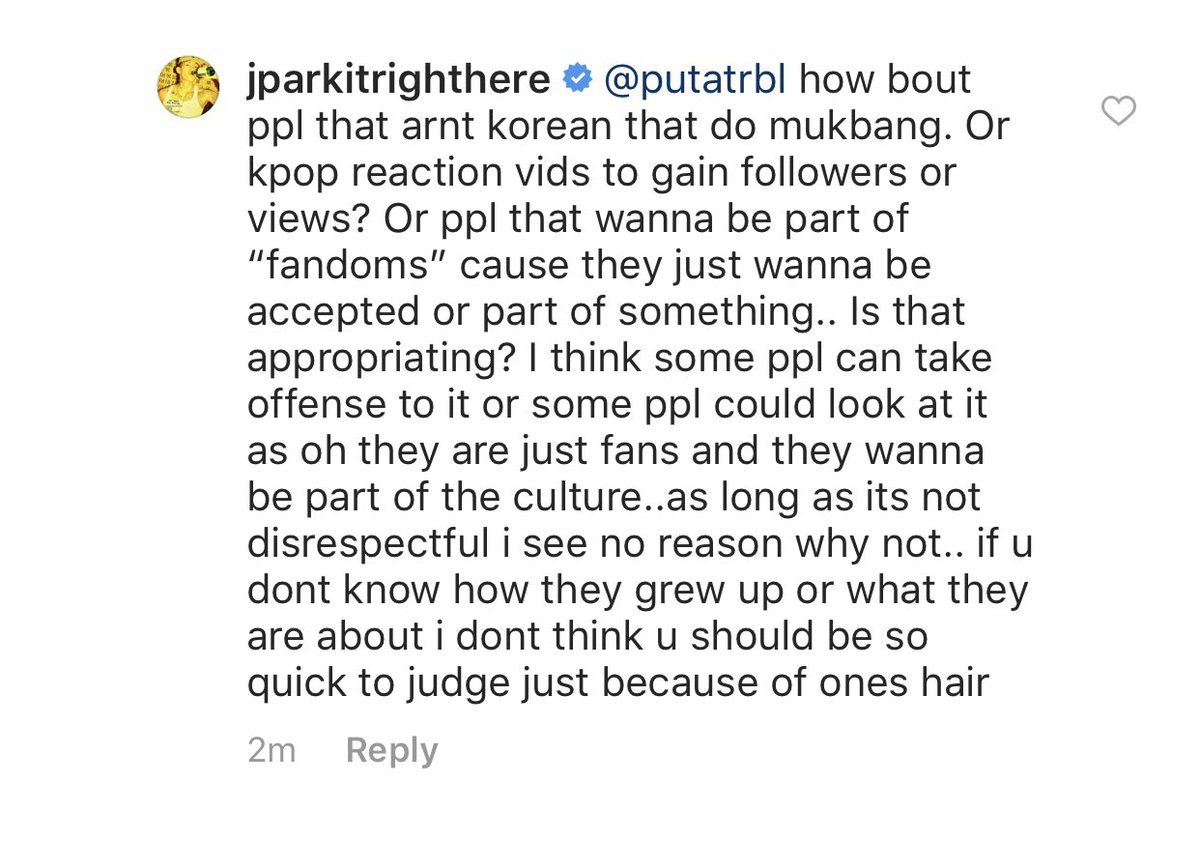 (reply to another person's comment) "how about ppl that arnt [sic] korean that do mukbang. Or kpop reaction vids to gain followers or views? Or ppl that wanna be part of 'fandoms' cause they just wanna be accepted or part of something.. Is that appropriating? I think some people can take offense to it or some ppl could look at it as oh they are just fans and they want to be part of the culture..as long as its not disrespectful i see no reason why not.. if u don't know how they grew up or what they are about i don't think you should be so quick to judge just because of ones hair"

The conversation then migrated to twitter, where Jay continued:

in no way was I telling anybody not to listen to a certain type of music or do things from a certain culture cause in no way do I speak for everybody in that culture so who am I to say. I was just trying to give examples so ppl could understand perspectives but I feel there is

no talking to the internet. Some ppl had valid point's but most were just trying to ridicule and hate. Also I think it's a beautiful thing that culture's influence each other and inspire each other. If you've followed my career from my music video's to the artist's I sign

I probably have the most diversity around me more than anyone else in the Korean music industry and it's not just to look "cool". I've probably been the most vocal about certain social issue's as well and made it VERY CLEAR where I stand

When I didn't have to at all but I felt the need to. I won't let anybody bully me into anything. If u were disappointed or offended I apologize but I know who I am and what I stand for at the end of the day so my heads always held up high

as an Asian male, being considered ''not cool'' ''non masculine" "feminine'' ''chinky eyed'' '' short'' ''fragile looking'' being called bruce lee or saying I look like a girl by non asian ppl, most my life sometimes even till this day, although it is not the same at all I am not

completely numb to to being judged based on look's and tbh am saddened to see that some of yall would think that I'm that insensitive. We're not enemies. There are REAL ppl living on this earth trying to spread hate and cause harm in a horrific fashion and we are not them.

If fact we are probably the opposite. So trying to educate us is totally understandable and cool but to make fun and hate is just straight up bullying. Should spend that energy going after the REAL bad guys.

Also in no way was I trying to justify anything but just wanted ppl to be more open minded and see persepctive's nothing more nothing less. No matter what culture I come across I always come at it in a respectful manner so dont spread hate. MUCH LOVE to everybody.

Even to all of you trying to troll me and make me look bad. I would prolly give u a hug if I saw u real talk. Jay Park loves you.

He then replies to a tweet that is now unavailable saying:

I understand that but why take your frustration's out on someone who admire's black people. it's like since ppl made fun of me for being asian I take those frustrations out on you for liking asian things. we just appreciating each other's culture. all LOVE on this side ❤️🧡💛

He then, seemed to have a change of heart (or was tired of the comments) and tweeted:

if I fucked up if I crossed the line, I SINCERELY APOLOGIZE I can see where a lot of ppl would be offended. Stop playing tho. yall know JAY PARK LOVE'S YALL. I'm sorry I fucked up

He also disabled the comment section of his Instagram post of Avatar Darko's video, and changed to caption to "If I spoke out place my fault I apologize. 🙏 Just know @avatardarko and I love yall. ❤️🧡💛💚💙💜🖤"