FNC confirmed that Lee Jonghyun and Choi Jonghoon are NOT related to the controversy in any way and to take legal actions against false rumours pic.twitter.com/aXNOb2Li96 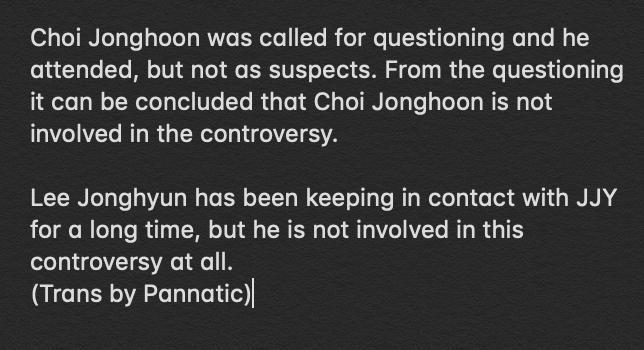 soompi translation of FNC statement:
We clearly state that Lee Jong Hyun and Choi Jong Hoon, who are artists at our agency, have no relation to this incident. Their relationships with the controversial celebrities are only as acquaintances who were in contact with each other.

Also, Lee Jong Hyun and Jung Joon Young’s relationship is just that of two people who were in contact a long time ago, and he is not connected to this incident. We hope that you will refrain from unnecessary misunderstandings or speculative reports.

In addition, we will be be taking strong legal action against malicious rumors spreading online about our artists.

The reason why Jung Joonyoung was not charged before

Dispatch summary of JJY case, reason the accusations in 2016 ended with "no charge" is because JJY did not submit the "Golden Phone (as nicknamed by Zico)" but acknowledged he filmed his then-gf, claiming he mistakenly thought she'd agreed, and had now deleted vid/replaced phone.

JJY and Highlight member Yong Jun Hyung had 1 on 1 chats, not related to the two groups, but Dispatch casts doubt that YJH might have known about his friend's habits. they cast this conversation under "molka attempt"

Dispatch said that even if the police knew the existence of golden phone 3 years ago, they fell for JJY's excuse abt deleting & breaking phone/didn't insist. A Dispatch informant claims JJY's "habit" is molkas and it's all a game for him and he only pretended to be sorry in 2016.

Translation by goblestone:
In 2016/8 and 2018/11, the police received reports about Jung illegally filming. Both ended as him not a suspect.
Especially in 2018/11, Jung’s phone repair reported the chat history to the police, the police submitted it to the prosecution advicing them not to press charges.

EDIT: FNC's statement: Lee Jonghyun and Choi Jonghoon are NOT related to the controversy in any way and to take legal actions against false rumours
EDIT 2: Added soompi's translation for FNC's statement