Sulli Candidly Responds To Malicious Comments About Not Wearing A Bra, Accusations Of Drug Use&more

#Sulli Candidly Responds To Malicious Comments About Not Wearing A Bra, Accusations Of Drug Use, And More https://t.co/UMtnGKh6KQ pic.twitter.com/WL2qOosdfJ

On the June 21 premiere of the show “Night of Hate Comments” (literal title), Sulli read out some online comments about her and candidly replied.

Sulli also replied to a comment that said it seemed like she uses drugs, since her pupils looked dilated. Sulli said, “There are even people who’ve uploaded comparisons of photos of my pupils next to photos of the pupils of people who really do drugs.”

She went on to say, “I did a film called ‘Real,’ and there was a scene that portrayed drug use. I did a lot of research then and watched five films a day about drugs. So my friends would say, ‘Are you Heath Ledger or something?’ I told them, ‘Can’t I do method acting too? I’m doing this because I want to do a good job.'”

Sulli also said, “I could take out a strand of my hair right now.” The MCs pointed out that she’d dyed her hair and eyebrows, so Sulli laughed and said, “Then I’d do it with my leg hair. I didn’t shave my leg hair.”

She clarified, “I don’t do anything illegal.” She said, “I act freely within the limits of the law.” 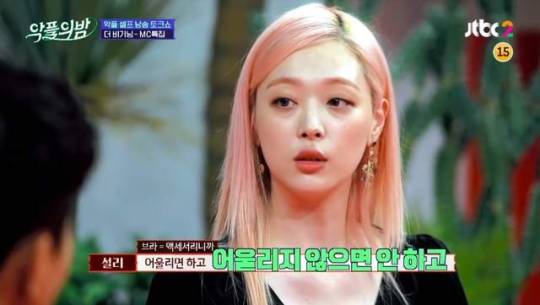 Sulli has also frequently been the subject of malicious comments about how she sometimes uploads photos in which she’s not wearing a bra. In response to one of these comments, she said, “I think this is about the freedom of the individual. Bras aren’t good for your health. They have a wire. They’re not good for your digestive organs, and I have issues with my digestion. Since it’s more comfortable not to, I don’t wear them. I think that it’s free and beautiful.”

She went on to say that she thinks of bras as accessories. She said, “They suit some clothing, and if there’s a piece of clothing that doesn’t look good with a bra, then I don’t wear one.” She surprised the others when she said, “I’m not wearing that accessory right now.”

When asked why she continues to upload photos of herself without bras on social media, she replied, “When I first posted a ‘no bra’ photo, there was a lot of talk about it. I was scared and could have hidden, but the reason I didn’t is that I want to change peoples’ prejudices about that. Part of me also wanted to say ‘This isn’t that big of a deal.'”

“I’ve heard that lately there are more people who go out without bras on,” said Sulli.

Sulli also talked about a time when she had filed a criminal complaint against someone who wrote a malicious comment about her. However, she found out that the person was going to a famous university and was the same age as her. She said, “If I wasn’t lenient with a student who goes to such a good university, they’d become an ex-convict. They’d have issues when they try to find a job later on.”

“I received a long letter from the malicious commenter,” she said. “They said they were sorry and they hadn’t known it would become such a large issue. They said they’d taken their stress out on me.”

She said that she felt bad about turning someone her own age into an “ex-convict” and decided to be lenient. “However, if I file a complaint again, I won’t be lenient,” she said.


[Netizen reactions]Article: 'Night of Hate Comments' Sulli opens up about 'no bra controversy', "Simply because it's comfortable"

1. [+819, -64] ㅎㅎ I agree that it's comfortable.. but.. I'm not brave enough so I still wear mine. I applaud her ability to not care about how others view her and just do what she feels like freely..

6. [+31, -4] As a woman, even I understand that when Sulli is talking about "eye r*pe", she doesn't mean when someone simply looks at her. It's when someone harasses you with their eyes or even verbally.. I think people are taking her words at face value.

8. [+22, -12] It's wrong to hate her for choosing to wear what she feels comfortable in but she can't control it if other people choose to look ㅎㅎ

9. [+18, -6] She's never once been in a controversy for simply not wearing a bra. It's because she always took pictures of herself without a bra on that it earned attention. Then she called it "eye r*pe", which is how it got to this point. She's trying to act like an innocent victim in all of this like the hate she's getting is unwarranted.

10. [+11, -4] Sigh. Duh, we know that it's comfortable. But imagine if a male celebrity showed up in leggings without any underwear or a long shirt, is that considered acceptable too??? Why do people always say it's accepted in foreign cultures when it's not in ours ㅋㅋㅋㅋ that argument just makes you look dumb.

4. [+45, -15] So many celebrities have denied crimes that they ended up committing anyway. Everyone on TV is so different from who they claim to be.

6. [+33, -6] It's really unfair that you're all treating every celebrity like druggies just because Park Yoochun lied

9. [+18, -6] I don't support shows like this. I can't imagine reading hate comments would be good for your mental health.