PENTAGON’s Hui and producer team Flow Blow have reportedly united once again to produce a song for “Produce 101”!

They previously created “Never” for the second season of the show and have also produced hits including Wanna One’s “Energetic” and PENTAGON’s “Shine.”

Industry representatives reported on July 11 that Hui and Flow Blow created a dance track for the final mission on “Produce X 101.”

In response to the reports, a source from Mnet commented, “We cannot confirm [the reports]. Please find out through the broadcast.” (Which means yes.)

Choi Byung Chan, a member of boy group VICTON who participated in survival reality show “Produce X 101,” has left the program due to health reasons.

Here is the full statement from Play M Entertainment:

Hello, this is Play M Entertainment.

Choi Byung Chan, who was appearing on Mnet’s “Produce X 101,” dropped out of the program for health issues.

Choi Byung Chan has been suffering from chronic achilles tendonitis for a while, and the pain has intensified recently, overlapping with his mental stress. He has been participating in practicing and performances while getting treatment at the same time, but it has become difficult for him to continue in the program.

After an in-depth discussion, we decided on his departure [from the program], and he will not be able to join Mnet’s ‘M Countdown’ stage this week.

We are sorry to announce his departure to the fans who have given him so much support and love, as well as to the program crew, fellow trainees, and viewers.

We will provide the necessary support to help Choi Byung Chan get sufficient rest and focus on treatment for the time being to recover his health.

Once again, we apologize to everyone for the unfortunate news. Thank you.


Choi Byung Chan has written a letter to fans following his departure from “Produce X 101.”

Read his letter below:

Hello. This is Choi Byung Chan.

First of all, I want to express my apologies for sharing unfortunate news.

I strongly wished to not give up until the end, so it is even difficult writing each word right now. However, I hope you know that I made this decision after much deliberation in order to greet you in a more healthy condition [in the future].

I will focus on receiving adequate rest for the time being and recover my physical and mental health in order to return to the stage in a healthy state for everyone who supports me. 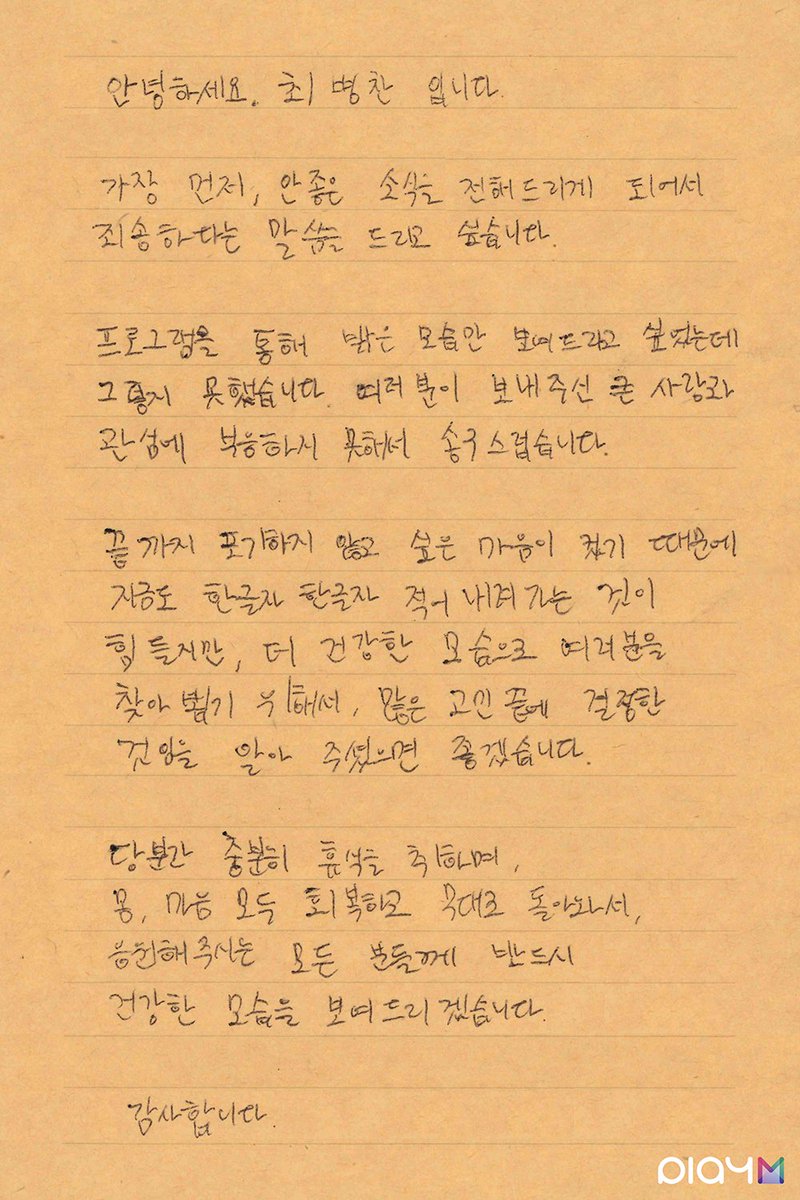