All the Best Hair and Makeup Moments From Sunmi's Most Colorful Music Video Yet
The K-pop star shines with every single look seen in the music video for "날라리 (Lalalay)."
BY DEVON ABELMAN
August 27, 2019

When K-pop star Sunmi kicked off the teasers for her new single, "날라리 (Lalalay)," with macro shots of a rainbow eye-shadow look, I knew the music video for it would change me. It officially dropped today, and my assumptions were proven correct.

Over the past two years, Sunmi's approach to beauty has been consistently innovative and incredibly fun to watch. The looks in "Gashina," the song that truly kicked off her solo career, were great. However, her hair and makeup just keep getting better and better with each release. Yes, she makes the kinds of songs that make you want to get up to sing and dance along with her, but she also backs them with makeup that people want to re-create too. If you ask me, that's the sign of a successful concept, and "날라리 (Lalalay)" goes above and beyond. I want to try out more than one of the looks her go-to makeup artist Gun Hee put together for the music video. Here's all six that I'll be attempting in the coming weeks. 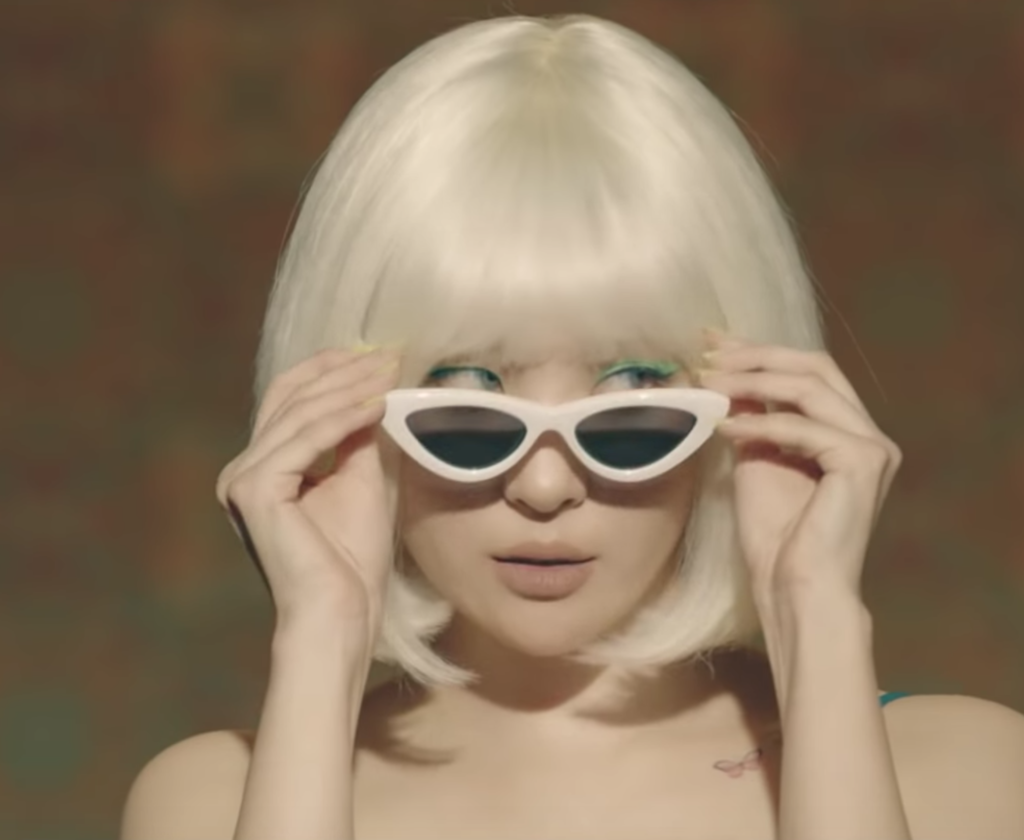 After freeing herself from a butterfly sticker-covered suitcase, Sunmi emerges with her lids covered in a mint green shadow and delicate flicks of black liner. Seconds later, a sleek, retro blonde bob appears on her head, and as the camera zooms up on her face, you'll notice that she is the only person in the world who can pull off that specific shade of nude lipstick. It's a pale sepia hue that doesn't look good on anyone, but somehow, Sunmi makes it work. Now, I'm slightly convinced I should give that nude a second chance.

Also, as she slips on cat-eye sunglasses, you can peep a trendy shade of neon lemon-lime polish on Sunmi's nails.

To contrast the colorful and sparkly makeup throughout the music video, Sunmi has a '90s grunge for one of the scenes in which she eats a flower. She looks super Kate Moss-y with her recently bleached hair, subtle wash of ash-gray shadow, and oxblood gloss.

I need to know what lip product that is ASAP but suspect it's a layered situation because it's a very particular shade of black-red. 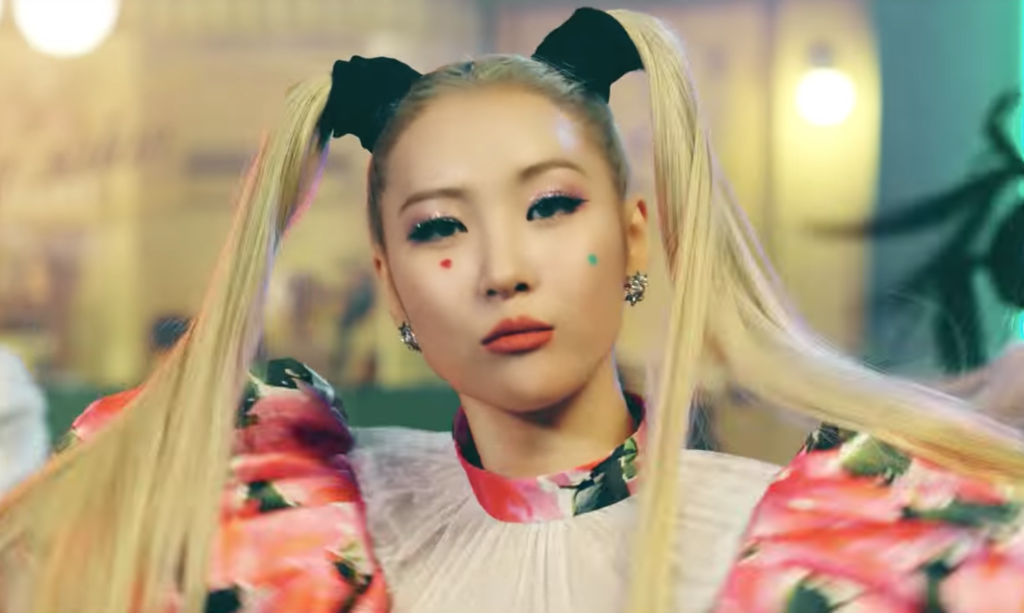 At one point in "날라리 (Lalalay)," Sunmi steps out of a beauty salon called Premium Beauty Salon with high pigtails adorned with black velvet scrunchies — a controversial look that, again, Sumni owns.

Her makeup, on the other hand, makes a major nod to "Noir." Heart cheek art was the standout look from her last music video, and it makes another appearance in the form of a turquoise heart on one cheek and a red one on the other. This time, Gun Hee paired the unexpected accents with glittery aqua and pink eye makeup. 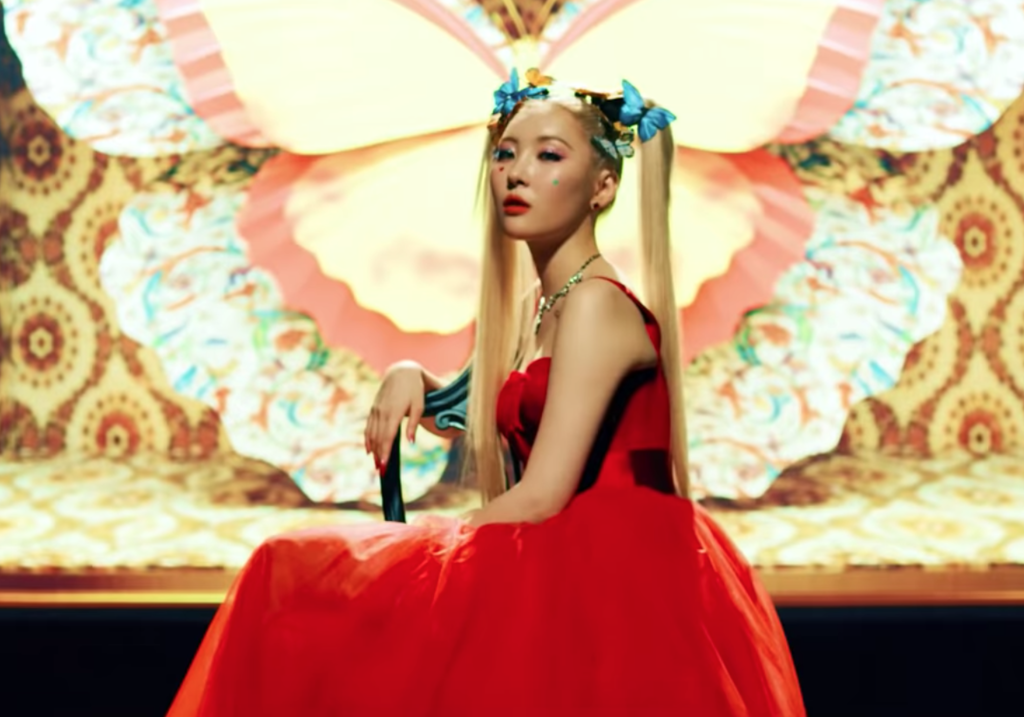 The high pigtails make a second appearance in the music video when Sunmi sits in front of a huge work of art featuring her likeness in butterfly form. She also butterfly-ed out her hair to match. 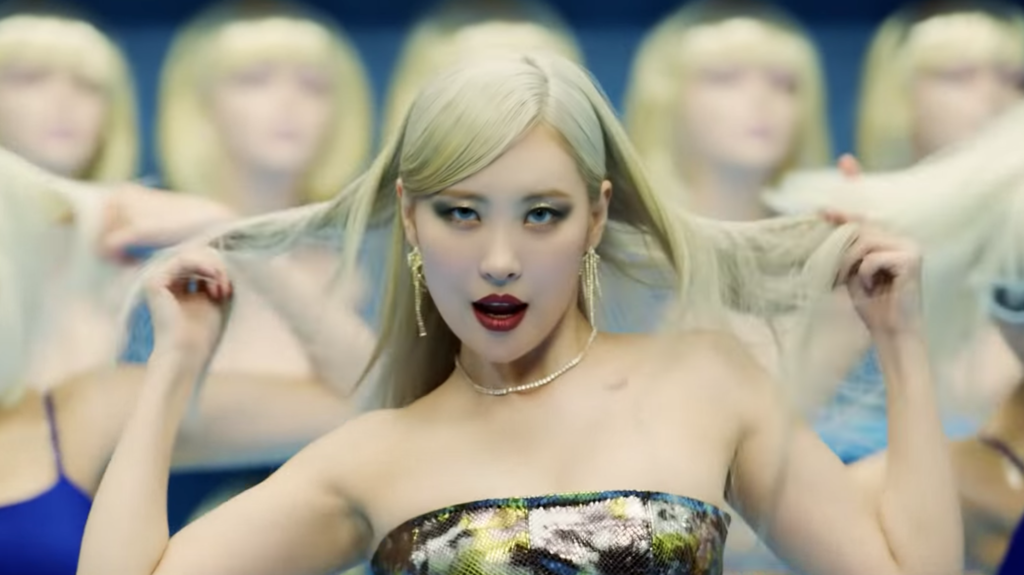 This look also ties in elements from a past music video. Sunmi's glitzy smoky eye is specifically giving me "Siren" vibes. I'm also loving the metallic red lipstick. Consider this look and this look alone my New Year's Eve makeup mood board. 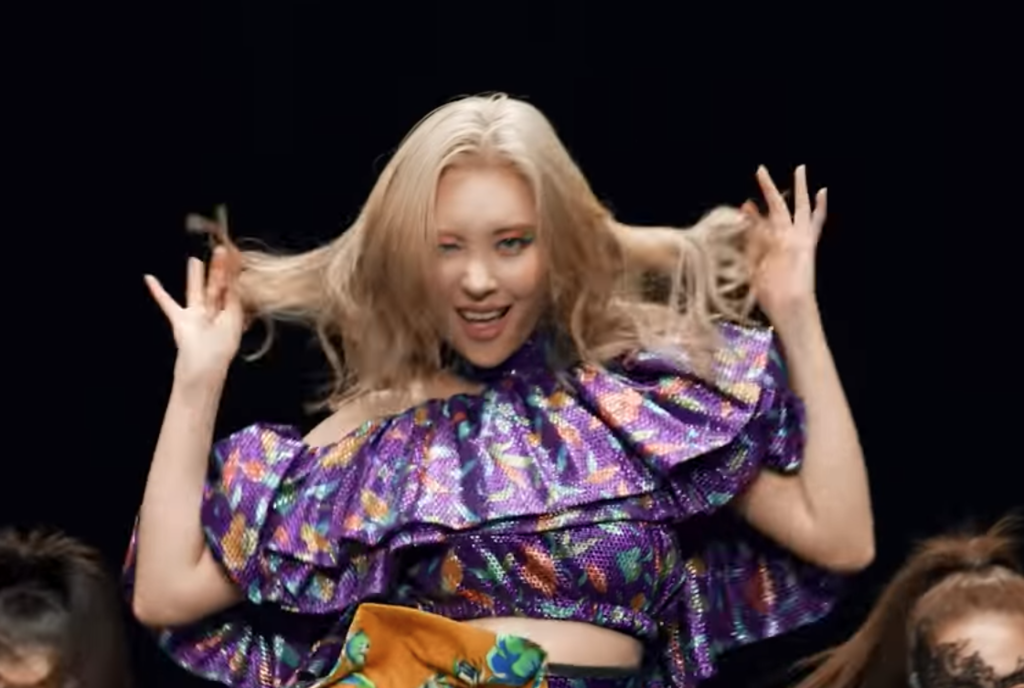 Sunmi waited until the very end of "날라리 (Lalalay)" to bring back the colorful shadow she hinted at in the teasers. It was the hardest look to take screenshots of, but it's luckily on the cover for the single. The blend of neons and pastels reminds me of a look that Jules on Euphoria would wear. 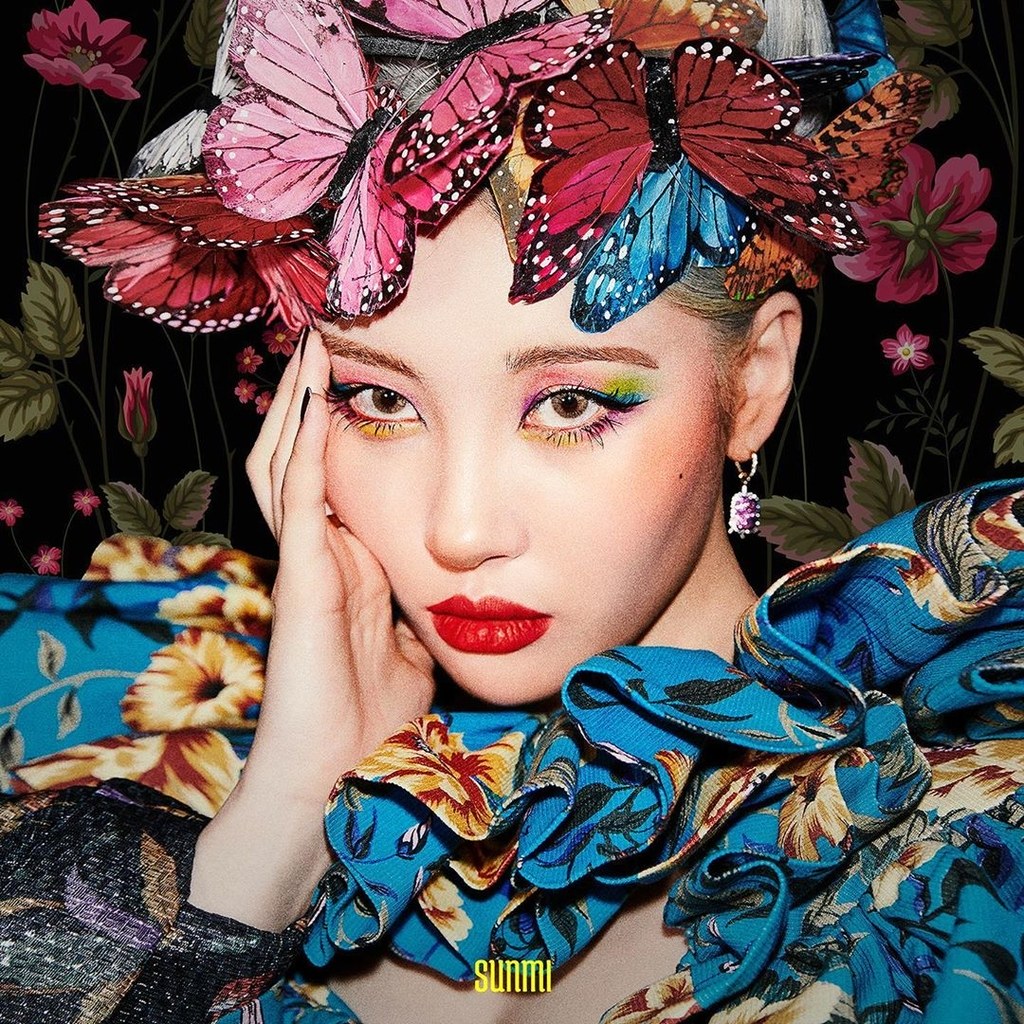 Sunmi's New Music Video Has KPop's Boldest Hair Makeup of the Year
One of my friends asked me how to re-create the look when the teaser came out. "Lots of blending, like your life depends on it," I replied, and I'm prepared to do just that.

Sunmi’s back at the top of the charts!

On August 27 at 6 p.m. KST, Sunmi released her new single “Lalalay,” which Sunmi wrote the lyrics for and co-composed along with FRANTS. 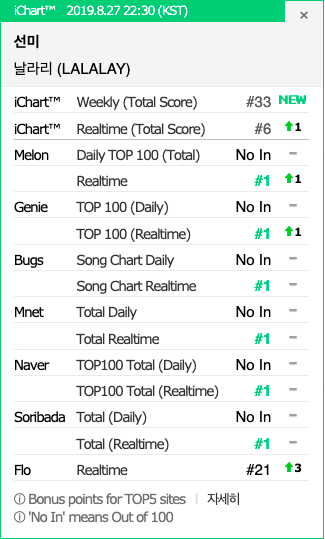 On August 27, Sunmi held a showcase to commemorate the release of her new single “Lalalay.”

During the showcase, she shared that the song was inspired by her time touring in Mexico. She said, “I got inspiration during the Mexico tour. Mexico is famous for its energy. I had high expectations when I went to perform there and I was not disappointed. They became one with the music without worrying about what the people around them were thinking. It was a new experience for me and I was really moved by it.”

She continued, “When I went back to the hotel after the concert, I laid in bed and thought about how Korea is also known for its energy. Then I suddenly thought about the word ‘lalalay,’ which is about knowing when to really let loose. I looked up the word and apparently the Taepyeongso instruments were called ‘lalalay’ in folk music. I thought that that was a good starting point for the song.”

Sunmi was also asked about her recent solo world tour, “Warning.” She replied, “I was afraid at first of the idea of holding a world tour as a female solo artist. I asked repeatedly if it was really okay for me to go on tour. I felt so much pressure. But when I went on tour, I felt like I worried for nothing. People with different eye colors, hair colors, and different native languages all sang my songs in Korean and called out my name at my concerts. I was really glad that I’d gone on tour. I felt like my perspectives were getting broader.”

She added later, “When I was promoting ‘Heroine,’ my weight went down to 39 kilograms [around 86 pounds]. I thought that I would die like this, plus I was getting ready to go on tour, where I would have to command a stage by myself for an hour and a half. With that responsibility in mind, I decided I had to gain weight or I would die. I ate regularly and exercised. My younger brother helped me a lot. He went on tour with me and we shared a room together. Because I wanted my sibling to eat well, I would end up eating with him.”

Sunmi also teased future comebacks, saying, “The next song title is five characters long. I’m working hard on it. I don’t know when it will be released, but I think it could be just around the corner. The promotional period for this comeback is quite short. It’s two weeks. I promised my fans that I would give them lots of opportunities this year.”