When asked why he made the videos, he said "I think I had the wrong idea of sex."

He told police there were three sexual assault orders and 50 victims and he received 900,000 KRW total for it pic.twitter.com/Po8fhm39RE

A 24-year-old alleged mastermind of a high-profile digital sexual exploitation ring was forced to stand in front of the public Monday following an earlier police decision to disclose his identity.

Moon Hyung-wook, a university student, appeared before reporters at the Andong Police Station in Andong, 270 kilometers southeast of Seoul, in the afternoon before being handed over to the prosecution for further investigation and an indictment.

He was put under pretrial detention on May 9 for creating and operating 12 chatrooms on the messaging service Telegram, which allowed paid members to view illegally taken photos and videos of violent sex acts involving underage girls.

The man is accused of blackmailing about 50 women since one or two years ago into providing approximately 3,000 sexual materials, such as photos and videos, for distribution and sale via the 12 chatrooms, including eight that operated under the name "Nth Room."

Moon stood handcuffed and grim in front of photographers without wearing a mask or cap as he was moved from the detention room of the Andong Police Station to the custody of prosecutors around 2 p.m.

He apologized to victims and their families and said he seemed to have had the wrong sexual awareness, when asked why he had committed the offenses.

He also said his number of victims reaches about 50 and that he instructed rape in three cases.

Moon reportedly told police he had received gift certificates worth 900,000 won ($730) from his chatroom members, or 10,000 won per member, but gave all of them to his victims

The Gyeongbuk Provincial Police Agency decided Wednesday to make public Moon's full name, age and face, saying the disclosure corresponds to public interest in terms of people's right to know and the prevention of similar crimes.

As Moon stated his offenses began in 2015, police plan to further investigate his additional crimes and co-conspirators. At least four of Moon's co-conspirators have been detained so far, with three of them put under pretrial detention. 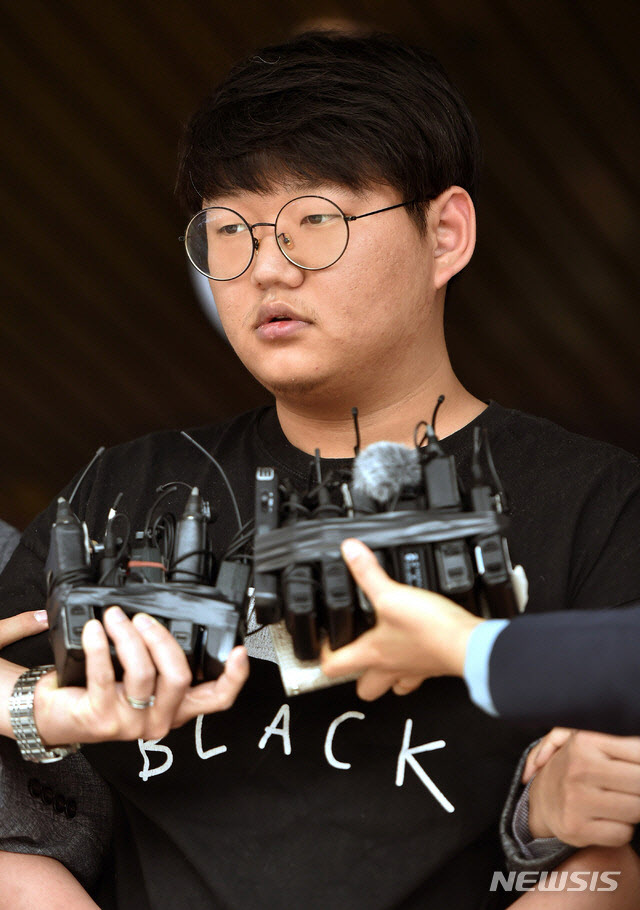 JUST IN: Moon Hyung-wook, aka "God god" (Gatgat), who is said to have created the Nth Room sexual exploitation chatrooms, has just been paraded in front of Andong Police Station. He said:

"I'm sorry to the victims and families... I think I had a wrong idea about sex." pic.twitter.com/9zdGaZ1eeh

Meanwhile South Korea has also revised its laws to punish possessing or watching illegally filmed sexual videos with up to 3 years prison (previously only the possession of underage sexual abuse videos was punishable) and raised its age of consent from 13 to 16 -> omona post. and Korea Herald article with all the revised laws.

Posts from This Сommunity “crime” Tag

Posts from This Сommunity “crime” Tag