- D-2's third track 'What do you think?' opens with a sample of one of cult leader/mass murderer Jim Jones' sermons (it's one years before the mass murder-suicide, for the exact sample, skip to 43:48). Edit: There was also another sermon used (skip to 27:56).

- Jim Jones was the cult leader who led a mass murder-suicide of his followers in his commune at Jonestown. Of the 909 people who lived and died in Jonestown in November 1978, the vast majority (around 70%) were Black people. (more info on wiki) 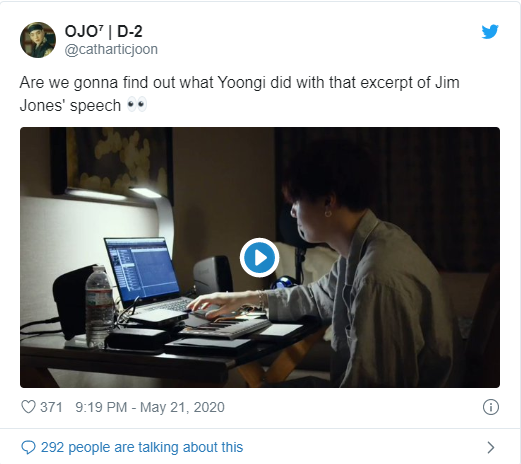 more proof that he was fully aware of the sample's use since y'all are still camping under this tweetpic.twitter.com/utCby7VaGW

?? y the hell r y’all bringing up the yoongi jim jones thing now havent we known this since 2019?? what’s up w y’all ? people already knew he was gonna sample that dude pic.twitter.com/4BBeJtwvyX

[Asianjunkie´s commentary]So this doesn’t come off as some kind of mistake or anything but purposeful. My only question is for what?

In order to not let my initial reaction take hold of everything, I took a step back and tried to understand. I’ve read a bunch of threads defending/explaining its inclusion, but even putting outrage aside, none of them make all that much sense. References to an anti-South Korean connection for Jim Jones don’t track for me as “What Do You Think?” doesn’t come off as pro-South Korea nor really pushing back against any of the messaging of Jim Jones’ beliefs. The context does matter, absolutely, and if the song was talking about cult-like behavior as a negative or pushing back against anti-blackness or something of that sort then it wouldn’t be as much of an issue, but rather the song is primarily talking about his success and status, and stans justifying this by saying it’s him likening the public to a cult doesn’t seem borne out in the lyrics to me and BTS have actually touched on stuff where that has made sense to me before like with “Pied Piper”.

So in the end, I don’t see Suga utilizing it in order to make some kind of point but rather just seems there as if Jim Jones is an aesthetic (perhaps as a representation of anger? unsure) and that doesn’t seem like an acceptable reason in any context. I would definitely like to hear his explanation of this regardless, because I’ve listened to a lot of fucked up shit growing up listening to hip-hop but this just seemed truly bizarre.

Of course, that’s just the way I see it. Perhaps stans are correct and what he intended was something more noble, but even they have to admit that the best-case interpretation has a rather tenuous logic and requires a somewhat significant amount of reaching, so at the very least it’s insulting to invalidate the feelings of those who do feel offended by Jim Jones’ inclusion in “What Do You Think?”. It just comes off as tone deaf to me. The discussions about what the appropriate backlash is doesn’t matter to me all that much, but I think it’s understandable if people are upset by this because he made it quite easy for that to happen.


- SUGA went live on Thursday to talk about his new mixtape under his Agust D moniker, D-2

- SUGA commented that because of schedule changes caused by COVID-19 he had time add two extra songs and film a music video for 'Daechwita'. "A luck that COVID-19 brought. Not because of, but thanks to COVID-19, we have 'Daechwita'. If we were still touring I wouldn't have been able to shoot the music video."

- The Korean word for "luck" he uses is 행운, which literally means "good fortune", "blessing". For the part "Not because of, but thanks to COVID-19" he first uses 때문에, which is neutral/negative ("because of") but then switches to 덕분에 which is more positive ("thanks to").

- Some Korean-speaking Armys argue that it is heavily context and has to be translated to "It's a silver lining from Covid-19. Not because of, but thanks to Covid-19, we got "Daechwita"."

- During the peak of the COVID-19 outbreak in South Korea, SUGA donated 100 million won (US$82,297) to the Hope Bridge Korea Disaster Relief Association, according to the association.

Posts from This Сommunity “bts” Tag

Posts from This Сommunity “bts” Tag