Ahead of the release of their mini album “So, 通” on June 10, N.Flying talked about the addition of their newest member Seo Dong Sung. Lee Seung Hyub, the leader of the group, also announced that he has been ruled exempt from military service due to a past injury and shared his thoughts on the matter.

In recent months, various idols born between 1991 and 1995 have enlisted, including WINNER’s Kim Jin Woo and Lee Seung Hoon, BTOB’s Yook Sungjae and Hyunsik, EXO’s Suho, Block B’s U-Kwon, and more. With a birthday in 1992, Lee Seung Hyub, whose turn to enlist didn’t seem far away, was ruled exempt from military service due to a past injury.

The N.Flying member spoke about the exemption, saying, “I thought a lot about when the best time would be to reveal the news. After sustaining a leg injury in 2014, I have since had two surgeries, and my debut was also postponed because of it. At the time, I received a reexamination, after which I found out I was ruled exempt. As a result, I am unable to serve in the military.”

He continued, “A long time ago, a fan asked me during a fan signing when I was going to enlist, so I told them that I wasn’t able to go due to an injury, but this is my first time making an official announcement. In some ways, it’s a sensitive topic, and in thinking about how fans would receive the news, I thought I shouldn’t rush revealing the news when I wasn’t completely ready.”

Lee Seung Hyub revealed that because military service is a sensitive topic, he feels apologetic that he is unable to serve. “Even after the surgery, I am experiencing discomfort. Even now, after performing and pouring my energy out on stage, my leg gets very inflamed. If I don’t continue exercising, I experience pain even during everyday tasks, so I’ve been exercising regularly. I’m sorry that I’m not able to enlist in the military, and my heart is heavy.” 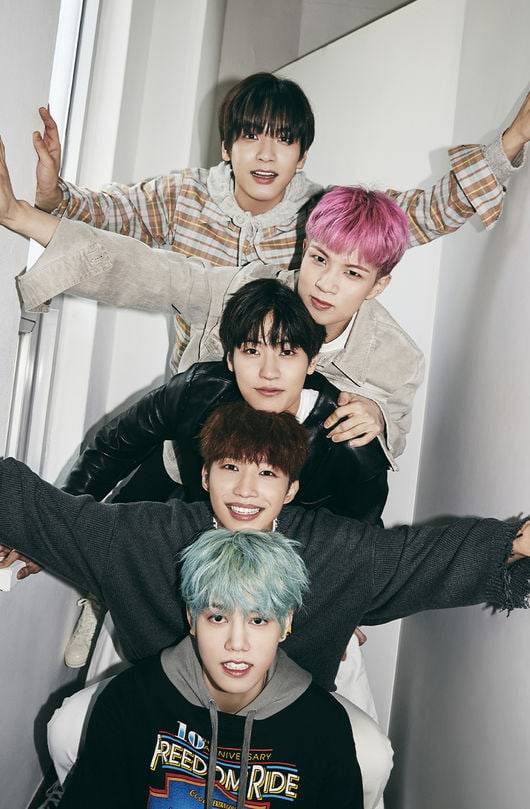 N.Flying also talked about their newest member. The group is set to drop their mini album “So, 通” this week, which will be their first comeback with Seo Dong Sung, a former member of HONEYST.

Seo Dong Sung commented, “I’ve joined N.flying as a new member, and I’m incredibly happy. I’ve been hearing from a lot of people that I look happy these days. At home, I’m the oldest of three siblings, and I’ve really been enjoying life as the youngest member of N.Flying. The members have been treating me to a lot of things and taking good care of me.”

He added, “These are my first promotions with the group, so I’m both excited and nervous, but the members have given me a lot of advice and tips.”

Yoo Hoe Seung, who was the youngest member of the group before Seo Dong Sung joined, said, “I’m glad I’m no longer the youngest member. After Dong Sung joined, he’s been working really hard in order to meet people’s expectations. He has a strong desire to learn, so as an older member, I want to teach him, and the team wants to take care of him. We enjoy being together, so we’re getting along well.”

Coming from the now-disbanded four-member group HONEYST, Seo Dong Sung revealed that he wondered if it was okay to join a more senior band, and that he couldn’t quite believe the news at first.

N.Flying leader Lee Seung Hyub said, “I’ve known Dong Sung for about 10 years. He was in a situation where he could’ve easily given up being a bassist. He’s a good guy and a good bassist, and we needed someone like him. We weren’t in a hurry to find a bassist, and we expressed to our agency that we didn’t care if it was a long time before we found someone. We just wanted someone who would become a part of the team. But after seeing Dong Sung, we felt that he could join the group. I’m thankful for him, and I’m really happy that he’s a part of N.Flying.”

Posts from This Сommunity “n.flying” Tag