[Eng] Let's Play Soccer Special - Spooky Coaching was recently subbed. DK is also a special MC for Stars' Top Recipe at Fun-Staurant in EP 34-36. KBS World is behind with subbing the full episodes by around 3 weeks, but already uploaded some EP 34 cuts. Seventeen are also doing those Huya Gaming Live Streams, I think two more will come out. Hoshi and Woozi also did Park Sohyun's Love Game, but I can't find a video.

[Some more Wonwoo-crop-top-content because boy, did fans freak out]
Wonwoo even trended on twitter afterwards.

200705 fs #Wonwoo
OP: ur cloths today made a mess of everyone(huge reaction) how do u feel?
🐱ah ah..its a lil embarrassing
🐱it was originally not crop top but coups hyung said "why dont u crop it since u have a built body" so i did
cr.17_ww_17@pledis_17 pic.twitter.com/OgPHooLQVb 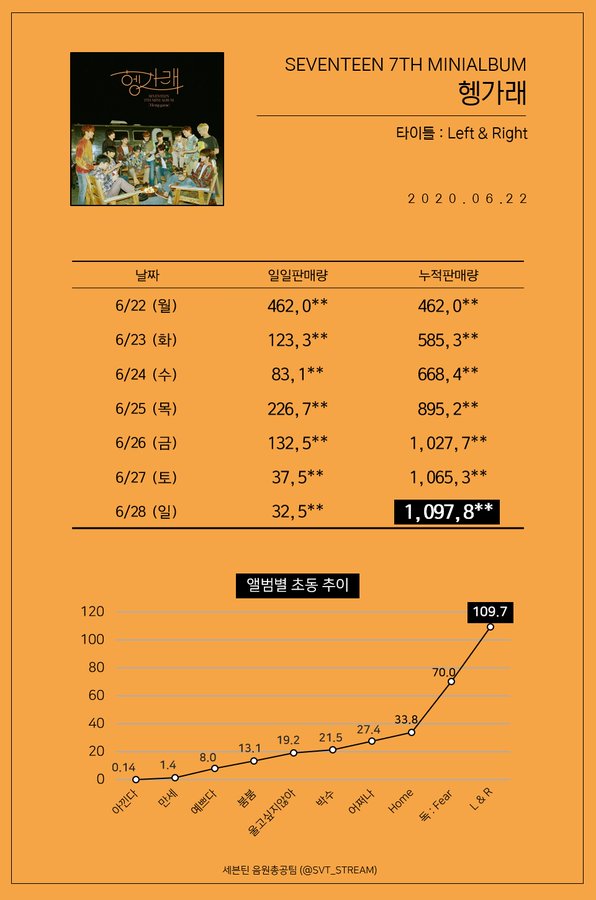 Also, on ktown4u, Chinese Carats bought ~330K albums. An interesting number for next time, when there's discussion on where Seventeen's sales primarily come from: Korea, Japan, China. (Also, their first week sales could have been potentially higher, multiple fans got emails from distributors that preorders would get delayed due to manufacturing issues.) Heng:garae also was Seventeen's biggest Korean album debut on Oricon Charts with over 100K sold units (An Ode sold +52K in its first week).

Digital Charts
Left&Right did (and still does) quite well on the digital charts. It debuted on #6 on Melon (their 4th highest debut on Melon) and managed to grab the #1-spot on melon right before the chart-freeze happened in a gripping show. It's only their third song, that has hit #1 on Melon! (The other two are Thanks and A-Teen).

[Relive the gripping moments at the twelfth hour]
The situation right now: Left&Right debuted on Melon on #6 at 7PM and pretty much got up one spot per hour till it was #2 at 12PM. It's the last chance to get the song to #1 before the charts freezes at 1AM. Carats are FIRED UP. Also, a Carat was coolly telling Seventeen to not go to sleep yet because a #1 would happen...so there was just no.other.option. lol

Carats were fired up and the first 30 minutes were going good, but then, Left&Right's green line started to show signs of struggling... 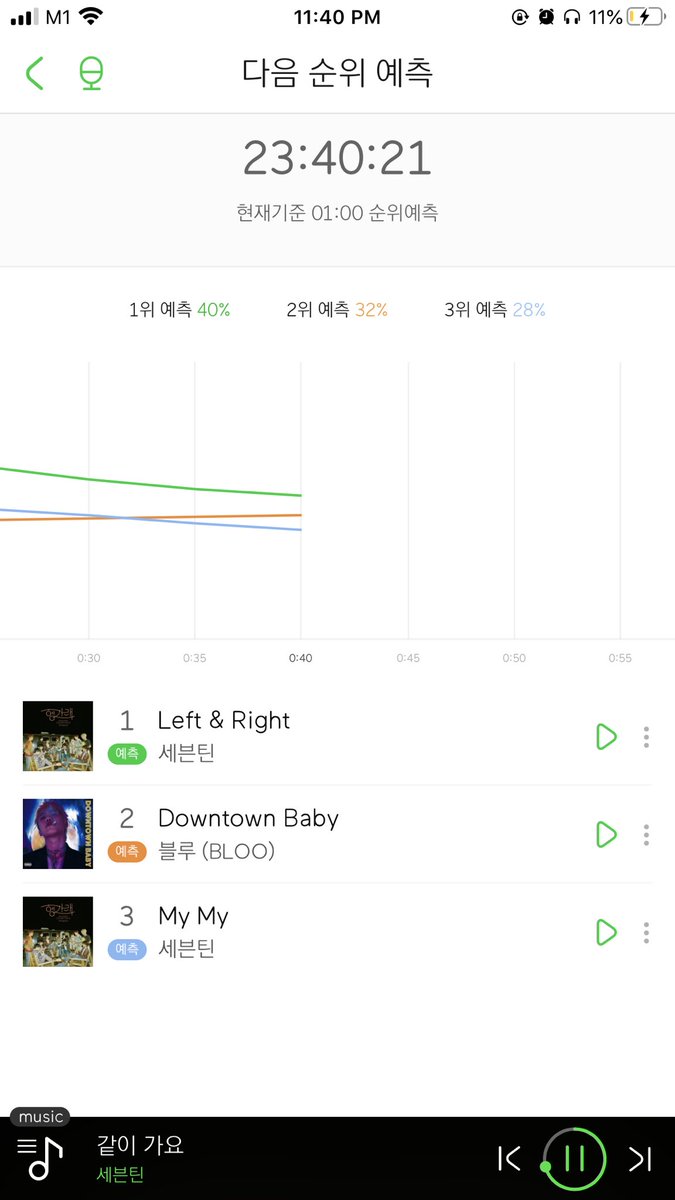 orange is catching up jsjfjdjf GREEN LINE U GOTTA GO UP!!!!! last 20 minutes we can do this!!!!!! pic.twitter.com/n7rxu8ahR6

THIS IS SO STRESSFUL

hang in there left n right come on you got this!!

PLEDIS WAKE UP ALL YOUR OFFICE STAFF GO STREAM

PLEASE HANG IN THERE KIDS 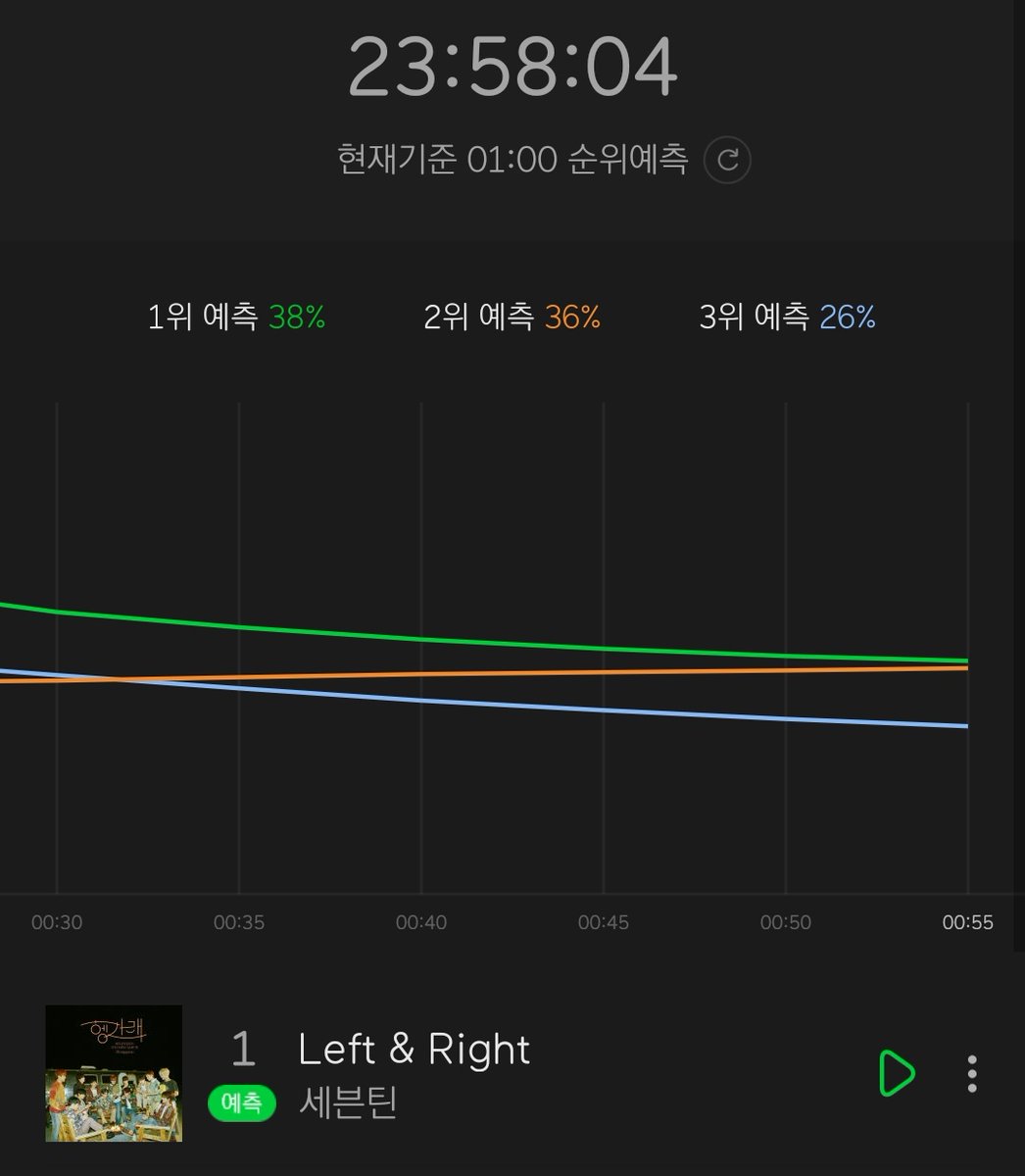 fuck i forgot how intense this shit is im shaking ahfjsjfjskkfskfkdk

LONGEST MINUTES OF MY FREAKING LIFE

that was the most intense streaming i have done in almost 5 years of carating pic.twitter.com/JrY7fXIZgz

Right after Seventeen ended their promotion, Melon's charting system got updated. Predictably, the tracks positions dropped, but Left&Right still held on quite well and placed #18 on the Melon Daily Chart, only dropping 2 positions.
The album also got #1 in 23 countries on the iTunes Album Chart (breaking another An Ode record) and debuted at #1 on the iTunes Worldwide Album Charts.

Online Fansigns
[Online Fansigns]
Surprisingly, what I've seen from the online fansigns so far, everything largely went (or still is) going pretty well and seems to be enjoyable for both parties :)

*OP said we should watch this together

🍒 #SCOUPS : bcs of u (carats), im happily doing the activities (in LnR era), everyone seems to worried a lot, but sincerely from trainee days, to debut, these days were the happiest activities. I like it the mostpic.twitter.com/Aah7cYaTg7

(I watched the interview that you did in new york , i really appreciate that you acknowleged the lgbt community because for kpop idols it's not easy to talk about these subjects.)

“I just said the obvious. Thank you”

I LOVE YOU SO MUCH IM SOOOOO PROUD OF YOU 😢😢😢😢😢 pic.twitter.com/Qu6ju9iKNw

200627 fs #Mingyu
Op did reverse fansign with gyu ㅋㅋ
💎how many copies of album did u buy?
🐶i spent a lot of money
💎who is ur bias?
🐶its u noona ㅋㅋ
He really enjoyed reverse fs. But he left his post it
OP drew a heart on the post it😂
cr.chacha_1122@pledis_17 gyu's fists! pic.twitter.com/SDMLI32rn0

OP posted video of reverse fansign!
op was wearing headband +holding marker like fs idols
🐶omg i missed u so much
💎who's ur bias
🐶u noona, noona do 3 set aegyo! hurry up!!no time!! thank u!!ㅋㅋ(HIS WAVING FISTS!!)
🐶hoshi hyung is also a big fan of urspic.twitter.com/Ds0HqHfyat

Woozi and Seungkwan doing the #Mariachallenge

Woozi and Hoshi doing the #SummerHateChallenge


Weverse
The chronicles of how Seventeen lost 3 members

Wonwoo: So this is why Hoshi isn’t in the waiting room right now!

➸ Hello I am S.coups.
Today, only 10 members of SEVENTEEN will go up on stage for the Pepsi performance.

🍚: what can’t our Carats do honestly (#LeftnRight4thWin)

🍚: now you guys are even good at ad-libing/jokes. Proud. 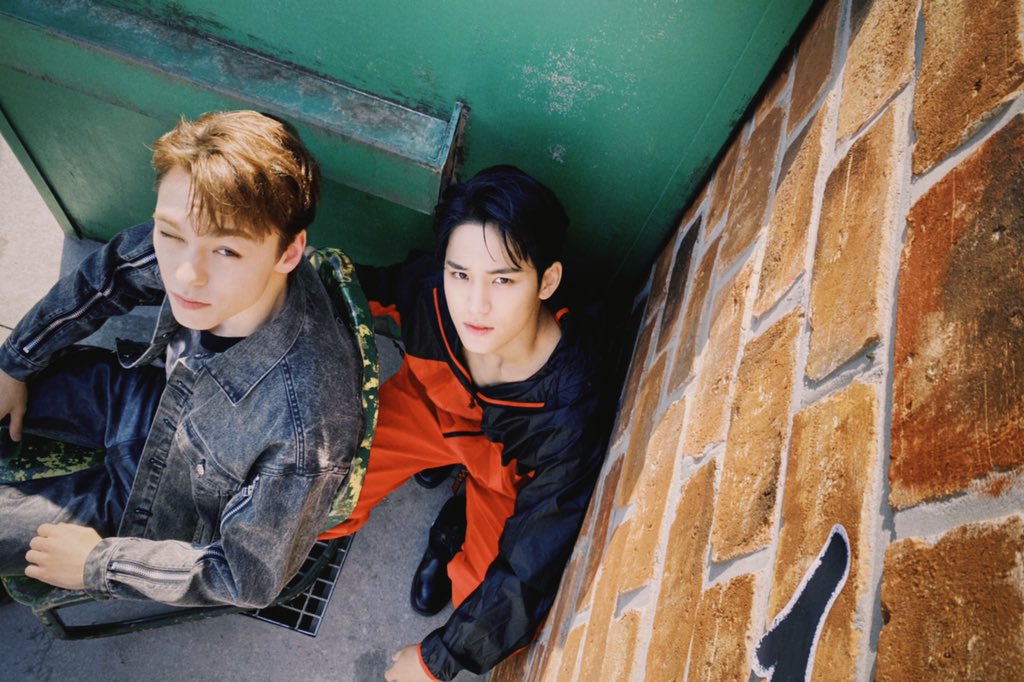 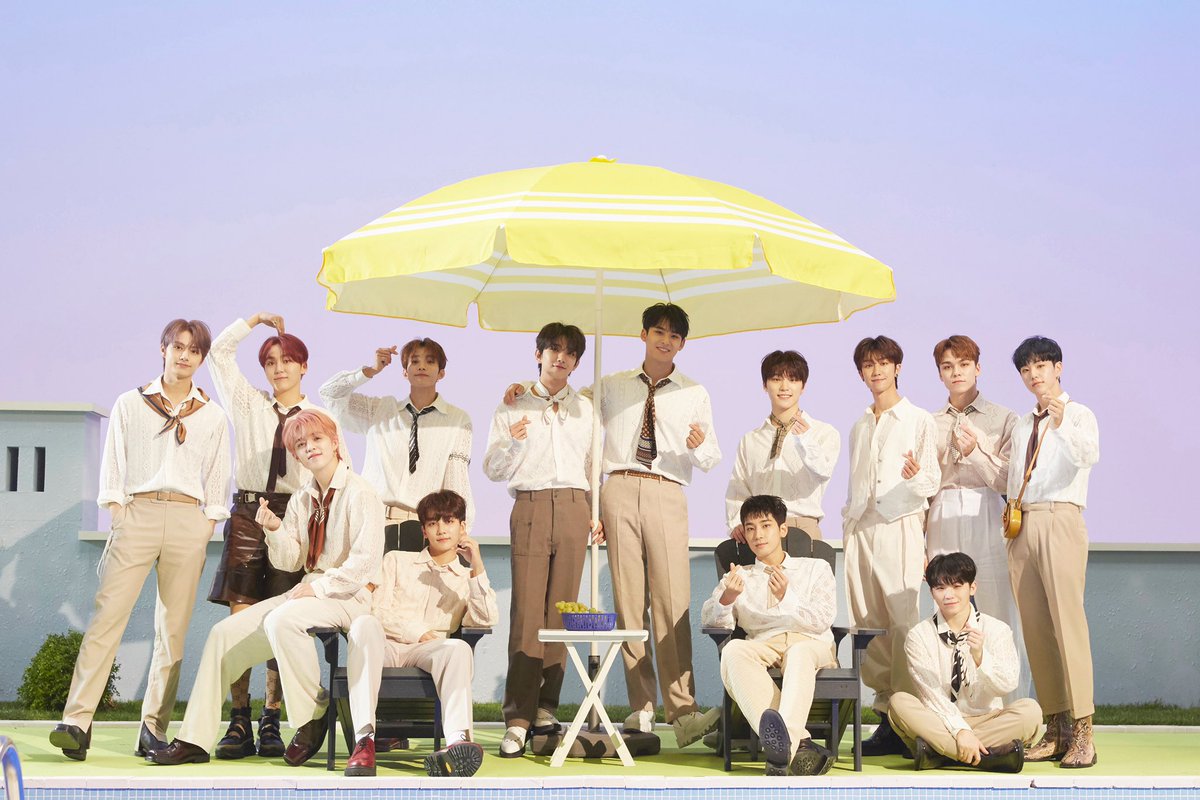 What else happened?
Seventeen did a collab with Thief&Heist for a bracelet. Mingyu apologized for the Itaewon outing during the album press showcase. The Hotdog Alliance is alive and well. Seventeen the magazine's insta bio clarify that they are not Seventeen the band. The guys updated that after promotions ended, they were having a small break. Some went home, and Seungkwan and DK went to watch Mozart. Jun was also spotted eating with Renjun and Chenle. For those who are interested in watching Xcalibur, it's available with subtitles here. (The perf features Kai as Arthur though, not DK). And yay, Seventeen now live in 3 dorms (with all but Meanie using solo rooms) and use 4 cars. Carats also beautifully decorated the DIY album 1 2 3.


I started this much too late, so this is a week too late. I enjoyed this era so so much, it felt like Seventeen and especially Scoups too were so at ease and relaxed this comeback that it rubbed off on the fans too and made it really fun for everyone. It was pretty much perfect.