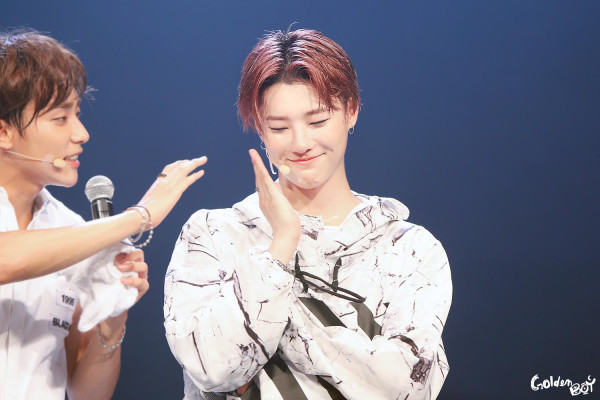 Since today is Seungyoun/Luizy/Woodz/Evan/Chengyan/Go'mach's (and groupmate Wang Yibo's) birthday, I thought it was a good opportunity to do an introduction post for him.

You would think the pimp post for one guy would be quick and short but this dude's Wikipedia profile is longer than my life expectancy. To summarize 6 years of career, Woodz, real name Cho Seungyoun, is a 24 years old solo artist, singer-songwriter, rapper, dancer, and record producer. From Uniq fame. from Produce X 101 fame. AND from X1 fame.

He has a career history with unfortunately very few ups, and a lot of downs and "tragedies", but his passion and yearning for the stage made him perservere and keep trying, even though he could have remained an indie-type artist or a music producer working in the shadows. So here he is, back as an idol soloist after a group hiatus, a scandal, and a disbandment.


[Biography by Wikipedia and yours truly]Cho Seung-youn (born August 5, 1996), also known by the stage names Luizy, and WOODZ, is a South Korean singer-songwriter, dancer, and record producer. He first rose to fame as the main rapper and sub-vocalist of Korean-Chinese boy band UNIQ, formed by Yuehua Entertainment in 2014.

When UNIQ's Korean promotions as a full group started waning in the latter half of 2015 due to rising political tensions between China and South Korea (the Hallyu ban), other members of the group began engaging in individual activities such as acting; however, Cho opted not to follow this career route, expressing a desire to focus on the musical aspect of his career. He co-founded the musical collectives M.O.L.A in 2015 (with Seventeen's Vernon, 15&'s Park Jimin, Producer Nathan, Pentagon's Kino, etc) and Drinkcolor in 2016. In 2018, he co-founded his personal production team TEAM HOW.

Following an appearance on the rap competition show 'Show Me the Money' season 5, Seungyoun first debuted as a solo artist under the stage name Luizy in July 2016, with the release of the hip-hop single "Recipe" with rapper Flowsik, followed by 'Baby Ride' featuring BTOB Im Hyunsik. Cho Seungyoun subsequently changed his stage name to WOODZ in 2018, reflecting changes in musical direction. His releases as WOODZ delved into alternative R&B, atmospheric music and dream pop, and featured Cho transitioning from rap to vocals. In addition to his solo work, he has written and produced songs for several artists in both his native Korea and China, as well as for the shows The Unit: Idol Rebooting Project and Idol Producer.

In 2019, Seungyoun participated in Produce X 101, where he rose to stardom. He was the only trainee that never went down in rankings, and the X1 member who started at the lowest in ranking (67th rank). He started getting noticed for his energetic, bright and funny personality, only to surprise everyone with his duality in the first performance as the main vocal of his team. He then earned his nickname as "all-rounder" Seungyoun with his great rap perf, vocal technique, dance skills and stage presence. By the end of the show, he had endorsed the role of main vocal, main rapper, main dancer, center, gag character, mood maker, spokeperson, MC, and leader. Respected for his skills and appreciated by his peers for his friendly and reliable personality, he finished in 5th place, making him a member of X1, rookie boy group of the year (op's note: they were robbed).

He debuted with X1 in August 2019 under Swing Entertainment. After the vote manipulation scandal erupted, they were banned from most music shows and variety shows, sworn at, and blamed for things that they didn't have control over (half of the members were minors and the youngest is 14 yo. Ain't nobody scheming a vast rigging plan). They were also unilaterally disqualified for rookie awards </b>, even though X1 is technically the 4th best selling male group of 2019 behind BTS, Exo and Seventeen, Quantum Leap is the best selling debut album of 2019, and the only rookie group (next to BTS and IU) to get their whole album in Melon Top 10).

After approximatively 2 months of promotion, Mnet and CJEM put the group in the dungeon for 3 months until their dismandment on January 6, 2020, which was decided in mere 10 minutes. He then resumed his solo career as WOODZ, releasing his phenomenal first EP Equal on June 29, 2020 with "파랗게 (Love Me Harder)".

His initial dream was to become a professionnal footballer. He moved to Brazil (Penápolis and Santos) during his final year of elementary school to be enrolled in the youth development system of Campeonato Brasileiro Série A club Sport Club Corinthians Paulista in São Paulo. He played as a main striker for Corinthians Paulista's junior affiliate team for two years. His first solo stage name 'Luizy' is from his youth days when he got the name Luizinho. While he was there, he was homesick and also dreamt to be a singer. He thus he packed his bags and returned to Korea. But before that, he attended Reedley International School in Manila, Philippines for one year to learn English, and went to auditions whenever he was back in Korea (he auditioned like 50 times) before joining YGE and debuting in Uniq with Yuehua Entertainment. He graduated in 2016 from Hanlim Multi Art High School in the Practical Dance Department and is now enrolled in Dong-ah Institute of Media and Arts.


[What people say about him]

mom: seungyoun now and the past is exactly the same. He’s a joker. Even when i’m scolding him “You! Get out!”
SY: Goodbye~
👩🏻: He packed and carried his luggage. When i opened it, it had a toy (buzz lightyear) etc.
👩🏻: “You really-Where are u going!”
SY: You told me to get out🤣 pic.twitter.com/uvElc7rF2a


this part I'm laughing kssk
cheetah : *keeps complementing seungyoun*
*sigh* his personality is so great ...
*realizes what she said*
"but I love my boyfriend the most !!" 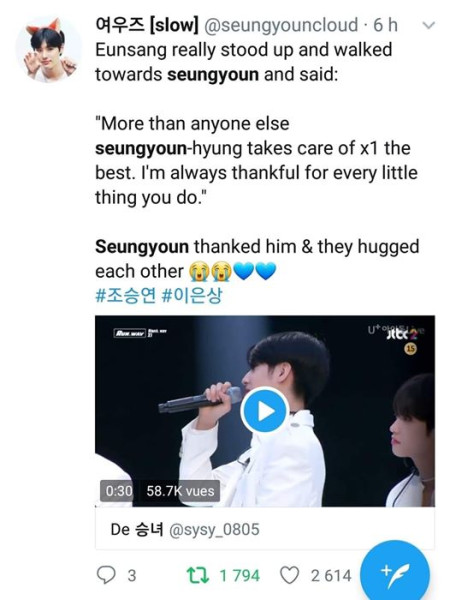 
what does seungyoun mean to seungwoo?
- the member he can rely on the most
- the member is the hardest to control
- the member makes him happy
- want seungyoun as his roomate
- seungyoun is the prettiest if dressing up like girl
- if seungwoo were a girl, he would date seungyoun pic.twitter.com/pVuuoMfa1a


yohan told op not to worry about his leg bcs it doesn't hurt and he's fine and that the members are taking care of him! seungyoun and hangyul takes care of him at the dorm pic.twitter.com/Af1uR6surP

""what's your relationship with x1 seungyoun?"
seungyoun is a very close younger friend of mine. he's so good at music. he's great at singing. it's the end if he goes to a noraebang. i'd feel daunted that i can't sing." pic.twitter.com/1Ozaq1LJfc

[#X1 LateNightIdol Thread]
Q: Which member do I want to be a fan of?

HJ > SW & SY. Overflowing charisma on stage. There's no exit when you fall for them.
JH > SY. Since PDX, he's energetic, tried hard to liven the atmosphere despite being shy when too much attention on him


seungwoo: the songs i always listen to nowadyas is ‘love me harder’ and ‘memories’, i really like memories, just now i called seungyoun and tell him that i really like it, i feel like crying whenever i listen to it


EDEN in an interview with MTV♡

"there are two people in my life that are like my sons: hongjoong and cho seungyoun” they may process this information differently. seungyoun is a rebellious type so if you ask him, he wouldn’t really agree that he's my sonhttps://t.co/7Heg1Bis5Z


A lot of people's favourite Woodz song (before he released Equal)


My personal favourite pre-Equal song (written when he was in depression.

The lyrics are from various suicide notes he wrote. It's really sad and the song is beautiful in an understated way, with a hint of hope at the end:

SY: “This song is related to the weather and my emotion—the sound of rain coming out at the bridge part and I wanted to put the sound of rain stopping at the end, which indicates that things are getting better.”

Better things are coming. We're always here for you no matter what.


One of my fav featuring with him

Forever bitter we didn't get an OT5 perf of this song


The best song of his mini album (music show ver.)


The other best song of his mini album (music show ver.)


The song to chill in the summer


[His legendary fancams and performances]Love me Harder (Studio Choom ver.)

[His covers]Adele - When we were young


One Ok Rock - Wherever you are