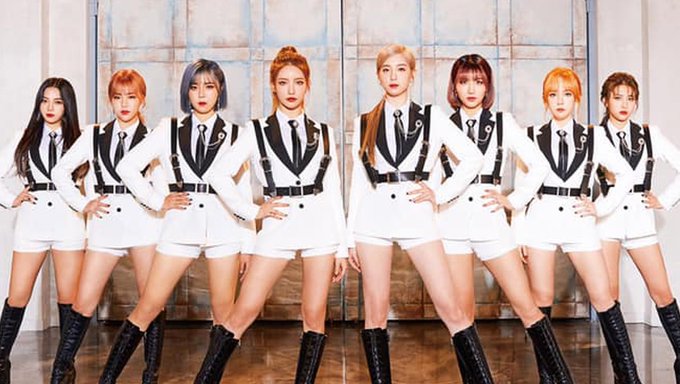 Girl group ANS has been going through some troubles lately. It started about a week ago, when an anonymous person apparently claiming to be an employee of ANS Entertainment posted on a message board. Their post alleged that member Haena (the youngest member, age 18) had been behaving irresponsibly. They accused Haena of skipping school, violating COVID-19 quarantine, posting on SNS without permission, and falsely accusing other members of bullying, among other things.

Haena then responded in a series of Insta posts where she defended herself, explaining the intense depression and suicide attempts that she had struggled with due to this unknown staff member's behavior.

Finally, on August 20th, the other ANS members responded to the situation, calling out the company's mismanagement. In their message, they say that ANS Entertainment verbally abused them and let go of all their staff multiple times, leaving the group with no money and no support, which forced them to do everything on their own. They say that they had no issues with Haena and were open to talking with her, but she hadn't called them. Finally, the members say that due to the company's financial struggles during COVID-19 and their mistreatment, they have all (except Haena) terminated their contracts. They hope to reunite if possible.

The translations of each statement (by @daily_ans on Twitter) are provided below.

Hello, this is everyone's fact-check fairy
The school needs an official letter, so I'll send one
Going to school to work, to work to school, not going to practice and go off in your personal time.
Every time an employee goes to your school, they're told your attendance rate is poor and you're unable to graduate
We asked for you to send proof shots of your attendance, but it turns out they were lies
You were caught several times and scolded by the company, and now there are no employees left
All the members got together to scold you, "Let's not do that. Stop lying."
Meanwhile, you've been caught lying and behaving arbitrarily over and over again
(you went to a PC room to write an official letter, and were quarantined for two weeks since someone who was confirmed also used the PC room. for two weeks you went out in secret while the other members were quarantined together)
Your position is unstable and you're playing the victim of your superiors saying the other members are bullying you.
After that, you were so upset about being scolded that you didn't even contact the members to apologize! Yet you're writing on your personal SNS
Why can't you all see that the members can't do this or that on their own now?
Are you working part time at an underground shopping mall? And the other members aren't allowed to do or say anything about it?
All the members aside from Haena are on vacation, and they can't even use personal SNS
The members used to have the authority to make their own posts on instagram and twitter, but the company took those rights away
First of all, do you think it's normal to be on SNS alone and act like that?
And while changing your tastes, you whine on instagram about how hard things are and working at a clothing store, collecting pocket money and playing around.
You're probably in a state of psychological anxiety right now, aren't you? It's usually psychological anxiety that works best in these situations
It's perfect for a compassionate scam, right? Don't be swayed by that kind of emotional manipulation, check facts and be neutral or swear
I have nothing to do with this person anymore, and I'm writing this because I can't stand your behavior

Post 1: I can't take it anymore. Even though my life has been ruined and hard enough to die, I didn't want to hurt you and I'm sorry to those who support and love me. So I was struggling and keeping it to myself. Is an apology that difficult. No, I didn't even want an apology, but don't you think this is a bit too much? I'm a real person, I'm dead now. Now that I'm awake, there's nothing to be afraid of. I didn't want to give you any trouble, but I really can't stand it. will I be able to understand my heart that I let go of quietly let go of without saying anything? What did I like so much that I had to take it on my own? Knowing how I felt, I didn't want to ruin anything and cause problems. If I die quietly, no one will know why, but at least if they're human, they'll feel sorry. But I really didn't want to wake up, and when I wake up, it's even scarier. You never did that without proof? No matter what I'm told, even if it's unfair, I still stayed. It's not because I'm foolish. This is my last consideration, so think carefully. If you give a genuine apology, even if I can't forgive you, I'll take it with me.

Post 2: I can tell you everything I've been holding back. I can't even be angry since I'm so dumbfounded. An official letter? I secretly went to the hospital because of depression and panic disorders because I thought if I told you, you'd pretend to be having a hard time, and the company knew that my parents weren't involved in school and only wanted me to graduate, and they left that up to the company as a part of the contract's terms, and the staff member did that? My hands are shaking so much. I went back to school and didn't have a problem with attendance, I said that it would be a problem if I didn't go to school because of practice in the future. I promoted well, what are you saying? I called my homeroom teacher every day to say sorry because I didn't want to say anything. Don't you remember that day at the cafe, all that swearing and hurtful things you said to me that I'll never forget? Also, what kind of person are you where you're telling the company that you can't breathe because of a panic disorder, that you collapse every day, and talk to the CEO and decide to take a rest, and you're an official? At the time, there was record of an official letter that was sent and I had already spoken to the CEO. I can't believe this. Because I'm a minor, I'm alone in the dorm. When I went home for family events, you always call me and doubt me. Why are you suspicious when I play around? At first, I thought it was just because you were concerned about me, but you went too far. When I couldn't answer the phone because I was sleeping, you were suspicious of me. Don't you remember the things you did to me that were out of the company's control when I couldn't do anything because of my panic disorder? Did I do anything wrong and avoid it? You said you couldn't go on a trip because of me. All the test results came out and the CEO told me to stay since it was dangerous, and the company did that from the beginning? Think about the things you've done. I didn't mean to violate your private life, but I have. Now it's up to you.

Post 3: Am I having fun and earning pocket money? Because you know my situation and say things like that, I couldn't stand it either. I thought I should say this much, but I was living without contact with my parents. I can't do this. I felt sorry, so I lived with my friend for months and they helped me with treatments and living expenses, but I also had to help care for my younger sibling. Because I felt so bad for my friend,

[TW: attempted suicide]I went up to the rooftop to die. I really was about to fall,but I felt so sorry for my friend, who didn't want anything in return but got a few jobs to help me and secretly take care of my sibling, that I cried and said I was sorry, so I tried to live my life. And then a part-time job? Even while talking with the company, the issue was prolonged and there was no solution so I had to get treatment for a long time. All I did was help a little bit by saying that they could use a photo of me that they wanted at their store and I could live with them. I went to the hospital and we discussed that I was better off being away from the company and not going to school because of the panic disorder. My family and company know about my situation and how hard it must've been, and that's why it's really creepy when seven people are together and wrote like that. Then, why did I try so hard to die? I tried to[TW: attempted suicide]jump, pulled out a knife, and I didn't want to take sleeping pills, yet I took more than 50and was taken to the emergency room. Was I pretending to be pitiful? Why would I pretend to be pitiful while talking about my family. And what did you say at the cafe that day? You told me to turn off my phone as soon as I arrived. If it weren't for that, I wouldn't have done all those things. I cried on my way home. This is my first time to talk about it. Proof? It's not too thorough, but I'll tell you one by one. Don't worry, and isn't that what you scolded me for? The company told me not to do it. At least I was like this while we were in the background talking about ending it. Is it okay for me to talk about my personal life? I don't know all the things you talked about, but you're the ones who usually don't care. And what did I do wrong? I know I'm alone and can't do anything, and I'm afraid of the things I'm hearing. I don't care anymore. No matter what anyone says, everyone involved will know. I'm sympathetic? I don't want that. I don't care how I'm treated and I hope you live with an apologetic attitude from now on. I'm exhausted.