On August 27, FNC Entertainment released a poster teasing the new project “P1H: The Start of a New World” (literal translation), which they described as a fusion project combining K-pop and K-movie.

“P1H: The Start of a New World” is a project that cinematizes the universe of FNC’s new boy group that is scheduled to debut this fall. The story will be about boys from different dimensions who gather together to find the star of hope in order to save the Earth, which has fallen to ruins due to a virus that maximizes people’s rage and violence.

The story is based on the legends of Alkaid, the easternmost star in the Big Dipper that is known as the star of hope, and of Alcor, a faint star that shines next to the Big Dipper and is known as the devil’s star because it was believed that people who saw it would die soon. The film will be written and produced by director Chang, who worked on “Canola,” “The Target,” and “Death Bell.” In addition to the six members of the new boy group, actor Jung Jin Young and CNBLUE’s Jung Yong Hwa will be starring in the film.

Director Chang shared, “K-pop artists are differentiated by the fact that they have their own musical universe, and that’s why they’re receiving love from people all over the world.” He added, “I wanted to combine two genres that are the pride of Korean culture and take on the new integrative challenge of conveying the musical universe of K-pop through the story of a film.” He also expressed his hopes for many fans to be able to easily understand and get more emotionally attached to the world built for the new boy group and gain comfort and support from the story.

The new boy group’s album has also been produced with the story and universe of “P1H: The Start of a New World” in mind, and they will continue to expand this concept and their philosophies in future albums and promotions.

The film’s first teaser poster paints a fallen city and a huge drone that covers the sky along with the backs of six young boys, who were spread across the future, past, and present. The teaser captures the moment they come together in a world contaminated by a virus due to an evil organization. Fans are already curious to discover what exciting stories will unfold and what the meaning behind the title “P1H” could be.

“P1H: The Start of a New World” will be released this October. 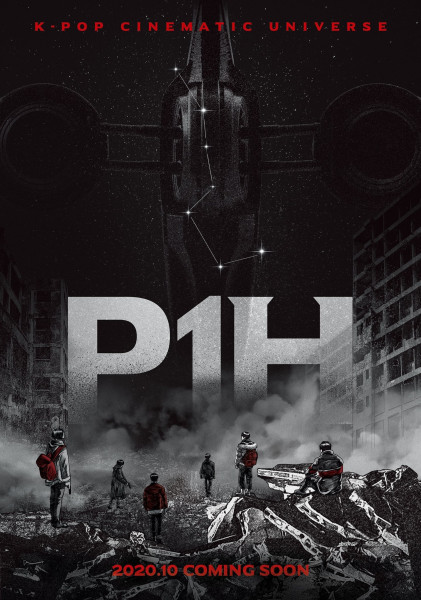