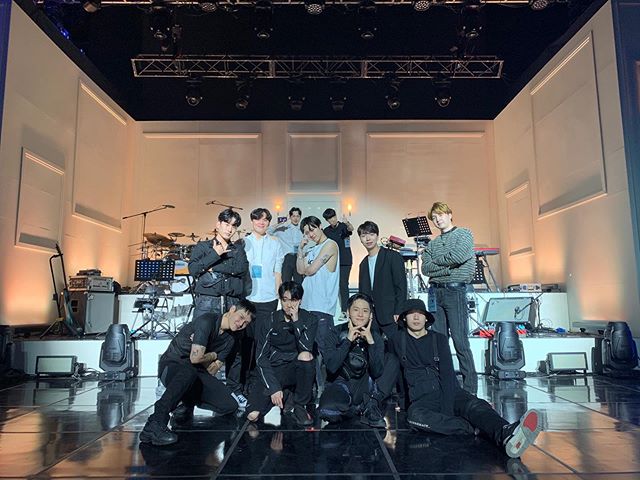 The concert was 3PM-5:30PM online on Sunday, September 27. There are a LOT of clips ahead so I'll try to make this as organized as possible.


The theme of the concert was late-night U.S. television. I noticed Saturday Night Live (the intro and bumpers), The Tonight Show with Jimmy Fallon (thank you notes), and The Late Late Show with James Corden (carpool karaoke). There was a live band, so that gave a totally different sound to the songs.

I was really satisfied with the set list. He performed everything I wanted to see. I thought it was really smart to start with Meaningless and then go to Lift Up. The transition from Lift Up to Accident was really good.

Then we have this VCR:

How is it that even things that were supposed to be funny ended up being kind of amazing??? I would absolutely wear a shirt that says "Music makes me crazy, beats make me alive"

I LOVE these songs on a deep, spiritual level and I loved this swimming pool set.

This was really funny, too, and I thought it was great that after he left the car he returned to the stage as cosmic Woodz to finish the song


Right before Pool, he had a video call with Colde, and after Love Me Harder, Groovyroom appeared as special guests.

I love this song so much! Sad that Colde couldn't be there but he did a good job by himself

My favorite song from Equal~~~

Thanks To (Unreleased Song)


look at him tearing up while singing luv again.. i wonder what he was thinking. things like.. he could’ve been singing this song with his members on their concert ㅜㅜ pic.twitter.com/UHyb9Noldv


I CAN’T HIS FACIAL EXPRESSIONS MAKES ME CRY pic.twitter.com/Lg9RAja9uX

This song is gorgeous.

how have you been the best song if woodz pic.twitter.com/Nui1NnHfXx


How Have You Been

The concert ended with Memories, but the sound cut out in the last few seconds.

I watched this concert with my friend, who doesn't follow Woodz and is only casually into K-pop. One of the things I was really interested in before the concert was how opinions would differ depending on how long you've followed Woodz.

El, non-fan (does not follow Woodz): She thought the concert theme was nice. She likes his fun, playful personality but thought the interviews were awkward. Worth the money spent. Her favorite songs were Pool and Love Me Harder. She wants to know when he's going to start acting.

Me, new fan (followed since Equal): I thought the concert was amazing. I knew there would be some parts of the experience that would be missing since it was not in person (singing along with an audience, that feeling when all the lights turn off right before the concert starts, you know what I'm talking about), but outside of that it didn't feel like a lesser experience. His voice and music are well matched for a live band. I thought the acoustic encore was beautiful. I definitely want to see him perform live in-person if I get the chance. My only comment was I wish he had tried to be a little flashier with his outfits, but he seemed to go for a higher-level streetwear style.

That's it! I'd love to hear your opinions! Thanks to everyone in this community that kept hyping him up after X1, because if you hadn't, look at what I would have missed!