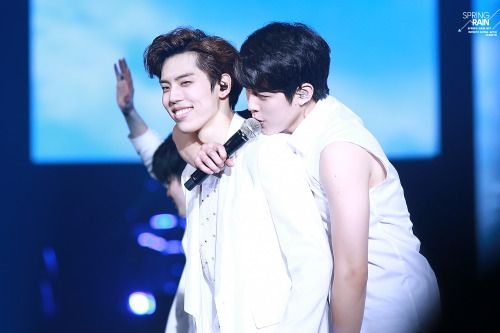 INFINITE’s Dongwoo and Sungyeol will be leaving Woollim Entertainment after 11 years spent at the agency.

On March 31, Woollim announced via statement that Dongwoo and Sungyeol’s contracts had expired, and that after extensive discussions, it was decided that the contracts would not be renewed.

Hello, this is Woollim Entertainment.

First, we are sincerely grateful for the fans who are supporting and cheering on INFINITE.

We are writing to announce that our exclusive contracts with INFINITE members Jang Dongwoo and Lee Sungyeol, who have been with us for 11 years, have come to an end. As their contract expiration date approached, we engaged in deep discussions with both members, and in the end it was decided that they would not renew their contracts.

Dongwoo and Sungyeol have been active in various fields ever since they debuted in 2010 as part of the group INFINITE. The agency shares our deepest gratitude to the two of them for being with us as long as 11 years.

We thank the fans who have sent their support for Dongwoo and Sungyeol’s music and other activities, and we will continue to cheer on these two members’ futures as they make a new start.

Furthermore, we concluded our final collaboration with INFINITE’s leader Sunggyu, whose contract expired earlier, on his single album “Won’t Forget You,” upon its release on March 29. We would also like to sincerely thank Kim Sunggyu for wrapping up the past 11 years in such a beautiful way.

Earlier this month, INFINITE’s leader Sunggyu also left Woollim Entertainment after the expiration of his contract.

INFINITE debuted in 2010 and has released hit songs like “Man In Love,” “Be Mine,” “Paradise,” “The Chaser,” “Back,” and more. Since 2018, the members have been completing their mandatory military service. When INFINITE first renewed their contract with Woollim in 2017, Hoya decided to leave after the expiration of his contract. L also left Woollim Entertainment in 2019, but stated he would continue to be part of the group.

I kept waiting for this post to come up but it didn't which honestly speaks volumes about how far Infinite have fallen out of the limelight. I myself haven't been a very good fan of theirs in so long, but lbr, there wasn't much to be a fan off at the end. Woolim did these boys so dirty and it makes me sad cause at the end of the day, they're still my most favourite KPOP group and Dongwoo remains my single most favourite human being in the world. I wish I loved his solo stuff more :(

(Hope I did it right this time mods, sorry. It's been years since I last submitted a post.)