The full show with english subtitles can be watched at dramanice

[enter-talk] EVEN LIKE THIS, YOU'RE ABLE TO SAY THAT MNET'S KINGDOM IS FAIR?

Do you really think that it's a coincidence that the groups who got notified about the increase on the 5 million won limit all ranked at the top based on the experts' evaluation? The groups who didn't go over the 5 million limit were BtoB and iKON and they ranked last and you're telling me that this is a coincidence too? And they ranked right on top of SF9 who only appeared for a total of 2 min in the 2nd episode and who ranked last. Is that also a coincidence? If they are so confident, then why aren't they revealing who these experts are? I should've known ever since Mnet's sloppy clarification. 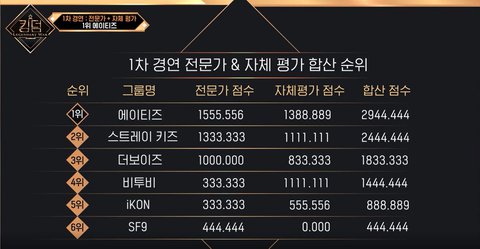 2. [+159, 0]
The group who went over the 5 million limit ranked #1 and #2 in the experts' ranking, the experts' lineup is anonymous, a few team said they never heard about the budget limit, and only the teams who didn't know about the change in budget got ranked last by these experts. They are being so sloppy but think that we won't figure it out 3. [+134, -1]
No but I don't even want to curse at the teams. But if our kids spent more on their stage, they would've definitely had a better stage than the one they got. Also, no matter what you say, the unharmed teams got the benefit

4. [+70, -0]
iKON and SF9 would've got better stage with the notice but they still had a good stage Even if they didn't rank high, they were memorable. BTOB were 5th in expert assessment, but in self-assessment, they got #2, why are they acting like such thugs against them? Who the hell are those experts?

5. [+45, -0]
Meanwhile, BTOB were 2nd in self-assessment;; I don't know who the experts were but this is a huge gap in rank. They aren't going to reveal who the experts are but they're already in a controversy with the set budget. They can't avoid the fairness issue until the end. And I watched the preview and saw that the 1st and 2nd team are able to choose their songs for the next round too, they will be able to have influence on the 1st and 2nd stage. They need to show us that they will be able to resolve this fairness issue in the 2nd round. They also need to get rid of those producers. To be honest, I can't understand this rank

Omona, should this show be renamed to Kingdom: legendary props?  Aside from the Kraken, who/what was your best moment (or prop) this week?