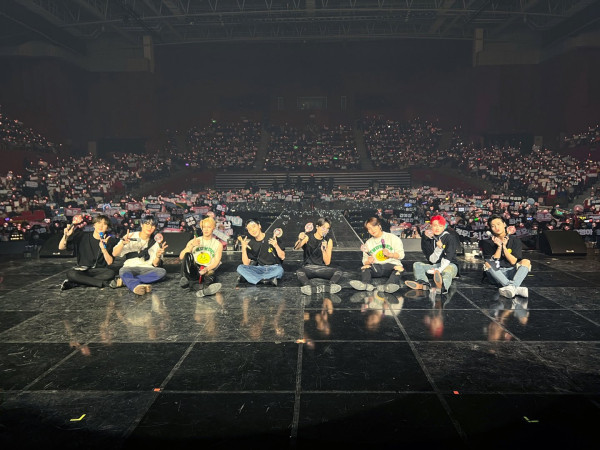 I'm aaaallll the way in the back!
On January 8, 2022 I traveled to Seoul, South Korea to see ATEEZ live for the second day of their three-day concert, 'The Fellowship: Beginning of the End'. If you're interested in finding out what it was like attending a concert in Korea during the pandemic, read on!

[Part 1: Checking In and COVID Protocols]
1. Checking In and COVID Protocols
First things first, when I arrived at the venue I had to be sure to check in according to the COVID protocols that were in place. There was a mask mandate and all attendees had to be fully vaccinated (two weeks after the second dose) or show a negative PCR test taken within 48 hours. In Korea, we use a digital verification app called COOV as our proof of vaccination, so I opened the app to show my vaccination status. We also had to get our temperatures checked when we checked in and when we entered the venue. There was also plenty of hand sanitizer to go around. We also had to social distance outside and my group of four people was constantly yelled at to separate (even though attendees were all sitting in groups of four in the venue, but whatever). 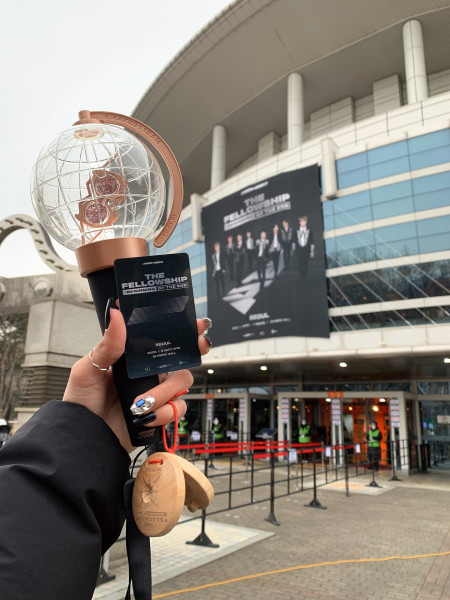 After checking in and making sure we were all clear with the COVID protocols, we were given our ticket on a card that had all of our information on it. We scanned this card to enter the venue. They also gave everyone a hot pack! And most importantly: we were given engraved castanets to use to clap because we weren’t allowed to cheer or sing. There were enough castanets for every attendee, so if you attended multiple days of the concert you got more than one set of castanets!

Unfortunately there was not a merchandise booth because they did not want to cause a large gathering outside of the venue. Some fans were giving away freebies or selling slogans at some of the cafes across the street from the venue.

Cheering and singing were strictly prohibited, though there were some moments where the crowd gasped or laughed along with the members. Instead of cheering, we were allowed to clap our hands or use our castanets. There were a few songs where there was a “fan chant” using the castanet, but (on my day of the concert at least) most fans just clapped the castanets along with the beat. We also clapped to answer questions the members asked us, clapped when we were excited, clapped when someone did something funny or cool...there was a lot of clapping that night. 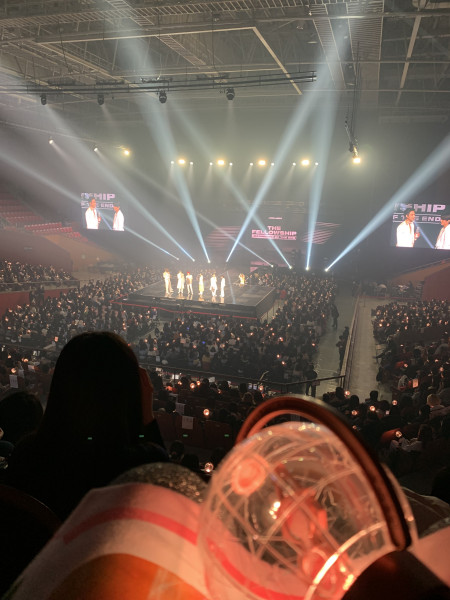 My view! I was all the way in the back in the last row against the wall. Also, I had to sneakily take this picture so I wouldn't get kicked out.

Watching the staff go after people filming/taking pictures may have been the most obnoxious concert experience I’ve had. There was a presentation in Korean and English telling fans not to take pictures or record in order to “protect the artists’ portrait rights” and that we’d have to delete our pictures and be escorted out if we were caught. Nobody cared, me included, and we all tried to film anyway. (As far as I know this has been a policy at concert in Korea for years, as one of my friends who lived in Korea around 6-7 years ago said the same thing happened when she went to a SHINee concert.)

I tried to film the opening when the members came on stage but immediately realized I was being watched, so I stopped for a few minutes. The girl sitting next to me was filming too and as soon as I noticed a staff member come toward us I elbowed her so she’d put her phone away. For the next hour or so the staff watched us very carefully and even came to stand next to our seats, but we were in the back up against a corner of the wall so it would’ve been hard for them to get to us.

As the staff did our rounds we were able to take our phones out here and there, but I personally barely got any usable footage. I had to scour Twitter after the concert for clips of what I couldn’t record.

The word on K-ATINY Twitter was that the staff was being paid 30,000 to 50,000 won PER PERSON that they caught. Staff were practically running around the venue and working together to point out fans. They were also using phones to keep track of the sections they saw people filming in, and one of my friends said they were on Twitter to see what angles clips were being posted from. I saw five people being escorted out, including one fan pretty much begging for her life and still getting kicked out anyway. One of my friends went the first day and the staff made her delete all of her pictures, but they forgot about the recovery/backup folder so she was able to keep all of her pictures after all.

Personally, as someone who is used to filming as much as I want to at the kpop concerts in the US, I was really annoyed by this and I don’t plan on going to any other concerts here because of it.
✨
[Part 4: Now for the Fun Stuff: The Concert Itself]
4. Now for the Fun Stuff: The Concert Itself
San was hinting at the setlist being intense prior to the concert and he was not lying. They opened the concert with Wonderland, Pirate King, Say My Name, Treasure and Precious. The setlist was so much fun to watch but I can’t imagine how exhausting it was to perform!

The concert was intense, high energy, and theatrical in the best way. I watch their performances all the time online but I was still blown away by the energy and how hard they hit the choreography. And they maintained that energy throughout the entire show. Their choreo is really intense and they performed a lot of hard hitting songs but I didn’t see any of them falter or show that they were tired. Their energy kept me energized and on the edge of my seat throughout the entire show.

They also did sing live! There was a backing track at some points, but they’re so loud when they sing I could clearly tell that most of it was live. Jongho sounded absolutely phenomenal and I loved hearing him live. They all sounded very good and I was very impressed. The show ran for exactly three hours from start to finish.

[The setlist~]
The entire setlist (without all the ments, VCRS and outfit changes marked, sorry):
1. Wonderland (Symphony No.9 “From the Wonderland”) ✨
2. Pirate King (Overload Mix)
3. Say My Name ✨
4. Treasure
5. Precious

My personal favorite performances are marked with the ✨ emoji because I think my opinion is that important.

ATEEZ is known for their dancing and their acting during their performances and I really loved seeing it firsthand. From start to finish they gave 500% for every performance. It was so exciting to see each of the members focused and in the zone in their own way while they performed. Individually the members are honestly just so cool and talented on their own, but together as eight they’re totally a force to be reckoned with. I’m kind of glad my seat was wayyy in the back because I’m not sure I could’ve handled seeing them up close for my first time lol.

I was really happy with the setlist overall and I think the way they set up the setlist was perfect. Selfishly I wanted to hear Mist because it’s my all-time favorite ATEEZ song so I hope they’ll perform it again in the future! Also, there was a funny part during a ment where San was singing Take Me Home so Yunho could dance and his voice cracked a little and he begged us to give him one more chance and then he killed it! I was also really impressed with Seonghwa’s singing!

I want to give a shout-out to the stylists because they did an amazing job of styling the members. I felt like the outfits really fit the members’ personalities and what they were comfortable with wearing. They also suited the performances and the songs perfectly. I really loved all of the outfits but my personal favorite outfits were the white and cream ones!

I am just so happy and thankful that I was finally able to see them live and in Seoul no less. I have less than pleasant feelings for the concert staff and the no filming rule but even that annoyance could take away from the absolute joy I felt watching them perform live. I hope next time I have closer seats so I can see them up close. Seeing ATEEZ live was everything I dreamed it would be and so much more.

I know I didn’t write a lot about the COVID protocols and all that (which is probably what most of you clicked this post for, lol) so if you have any questions about anything please let me know! 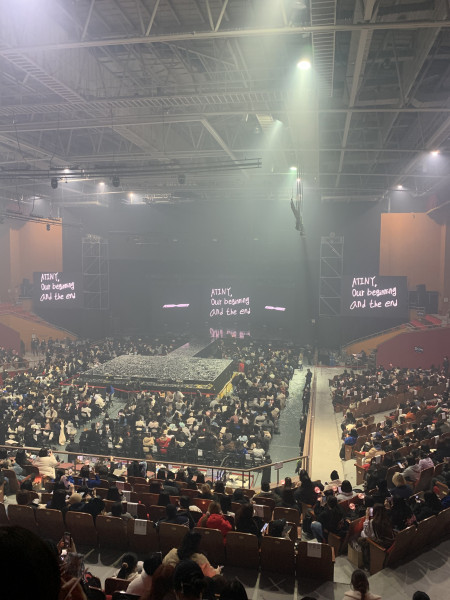 Thanks for reading! ❤️


Source: ATEEZofficial on Twitter (header pic) / all other photos are my own personal photos
Tags: ateez, concert, omona discussion
Subscribe